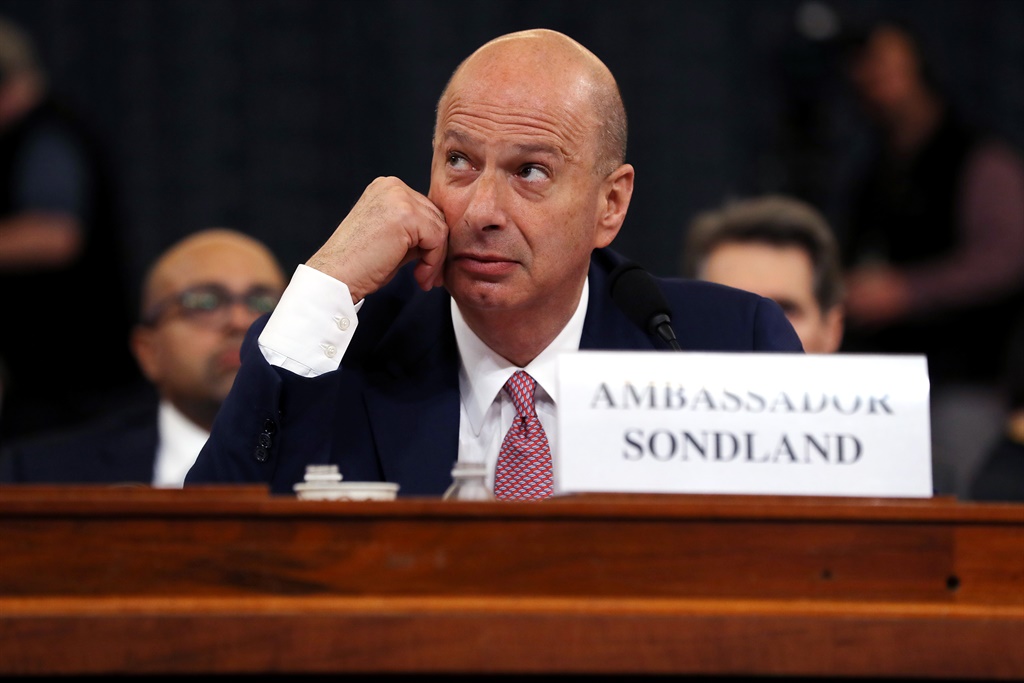 Gordon Sondland, the U.S ambassador to the European Union, testifies before the House Intelligence Committee in the Longworth House Office Building on Capitol Hill November 20, 2019 in Washington, DC. The committee heard testimony during the fourth day of open hearings in the impeachment inquiry against U.S. President Donald Trump, whom House Democrats say held back U.S. military aid for Ukraine while demanding it investigate his political rivals. (Photo by Chip Somodevilla/Getty Images)

Three women have come forward alleging that US Ambassador to the EU Gordon Sondland, a key witness in the impeachment probe into President Donald Trump, made unwanted sexual advances on them in business contexts, according to a new ProPublica report.

Portland Monthly owner Nicole Vogel said Sondland, who made his name as a prominent philanthropist and businessman in Portland, Oregon, forcibly kissed her in 2003. She alleged that he pulled his potential investment out of her business after she rejected his sexual advances.

Jana Solis, a hospitality-safety engineer for the insurance company Marsh & McLennan, told ProPublica that Sondland groped her, forcibly kissed her, and exposed himself to her on separate occasions while she attempted to do business with him in 2008.

After her first meeting with Sondland, during which he hired her to work for his hotel company, Solis said Sondland suddenly "slap[ped] me on the ass and said, 'I look forward to working with you.'"

On another occasion, Solis said Sondland met her undressed "from the waist down." Solis rejected his advances, but during another meeting, she said Sondland assaulted her while she was inspecting one of his hotels in Seattle.

"The next thing I know, he's all over me," she said to ProPublica. "He's on top of me. He's kissing me, shoving his tongue down my throat. And I'm trying to wiggle out from under him, and the next thing you know, I'm sort of rising up to get away from him, and I fall over the back of the couch."

Solis told her then-husband, Kevin Schnabel, about both the incident in the pool house and the one in the hotel.

"One of the things that always stuck in my head is her comment that he literally had his tongue down [her] throat, [and as she was] trying to get away from him she had fallen over the back of the couch," Schnabel told ProPublica.

Solis said Sondland called her up a few days later and screamed at her over the phone about work-related issues. The two never spoke again.

Natalie Sept, then a local political operative in Portland, alleged that Sondland tried to kiss her after a work-related meeting in 2010, during which Sondland suggested he could get her a job with the state film commission. Sept said she rejected Sondland's advance and pushed him away.

In all three cases, the women allege that Sondland dangled work and business opportunities before making advances on them.

ProPublica worked with the Portland Monthly, which Vogel owns. In an editor's note, ProPublica states that, "Vogel cooperated with the story as a source. She was not involved in editorial decisions. The magazine's editorial team decided to partner with ProPublica to independently report her story."

Sondland denied all the sexual-misconduct allegations, and his attorney accused the women of pursuing relationships with Sondland for their own "financial and personal gain," implying that the women were taking revenge on him by making allegations after their business relationships fell through.

"In decades of my career in business and civic affairs, my conduct can be affirmed by hundreds of employees and colleagues with whom I have worked in countless circumstances," Sondland said in a statement to ProPublica. "These untrue claims of unwanted touching and kissing are concocted and, I believe, coordinated for political purposes. They have no basis in fact, and I categorically deny them."

Sondland's attorney also accused ProPublica of "veiled witness tampering" by reporting on the allegations against Sondland during the ongoing impeachment inquiry.

"Given the timing of your intended story, a reasonable conclusion to be drawn is that you are attempting to affect Ambassador Sondland's credibility as a fact witness in the pending impeachment inquiry," the lawyer, Jim McDermott, told ProPublica in a statement. "Given the politically charged climate in which current events are unfolding, some might consider this to be veiled witness tampering."

A rebuttal of the investigation was published on Sondland's website. "Ambassador Sondland refutes the allegations entirely and and intends to bring a lawsuit against those publications, their management, and others involved as swiftly as possible."

Update: This story has been updated with the fact that Sondland's response has been published to his website and that Vogel owns Portland Montly.