A man shouts during a protest rally against the jailing of opposition leader Alexei Navalny on January 23 in Moscow.
Mikhail Svetlov/Getty Images
Tens of thousands of Russians from across more than 100 cities took part in a massive protest against Russian President Vladimir Putin and his arrest of Russian opposition leader Alexei Navalny on Saturday.

The protests took place across the country, from Moscow to St. Petersburg, and in some of the most remote parts of Siberia, where residents braved - 60 degree Fahrenheit temperatures to express support for the anti-corruption activist.

In August of 2020, Navalny fell violently ill while on a flight to Moscow and was hospitalized in Berlin. Navalny later was able to trick a Russian Federal Security Service agent into revealing that the cause of his illness had been a Novichok nerve agent meant to poison the anti-corruption leader.

Navalny spent the past several months convalescing in Germany but returned to Russia on January 17. After arriving in Moscow, he was immediately taken into custody on claims that he had violated the terms of a 2014 suspended sentence for embezzlement.

He is currently being held at Matrosskaya Tishina prison, where a judge has ruled he should remain in pre-trial detention for the next 30 days.

Upon the news of his arrest, Russians began using social media platforms, including TikTok, to organize protests. It is believed that more than 40,000 people took part in Saturday's nationwide protests. At a protest in front of Matrosskaya Tishina, police used truncheons to beat protesters, according to Russian outlet Mediazona. One 54-year-old woman was kicked by an officer and landed in the hospital. A cyclist was pulled off his bike and beaten by law enforcement in St. Petersburg, and more than two dozen people in Moscow were injured in a skirmish with police.

More than 3,400 Russians were taken into custody during the protests, including Navalny's wife Yulia. On Saturday, she posted a photo on Instagram of herself captioned: "Sorry for the poor quality. Very bad light in the paddy wagon."

She was later released.

Read more: The wife of Russian opposition leader Alexei Navalny is arrested as mass protests defy Putin and call for his release from prison

Journalists were among those targeted by the authorities. Dozens of reporters from several independent Russian media outlets, including TV Rain, The Insider, and Vital Stories, were detained by the police and given hefty fines. In one case, police went to a location where Dozhd TV employees were working and turned off the electricity to the building, Mediazona reported.

Pussy Riot founders Maria Alyokhina and Lyusya Shtein were also among those detained. According to the state-owned Russian news agency Ria Novosti, Alyokhina was fined 30,000 rubles (or around $400 USD) for allegedly encouraging people to "participate in an unauthorized rally."

On Saturday, US State Department Spokesperson Ned Price released a statement condemning the detainments and the violence.

"The United States strongly condemns the use of harsh tactics against protesters and journalists this weekend in cities throughout Russia," he wrote, noting that the crackdown on protesters followed "years of tightening restrictions on and repressive actions against civil society, independent media, and the political opposition." 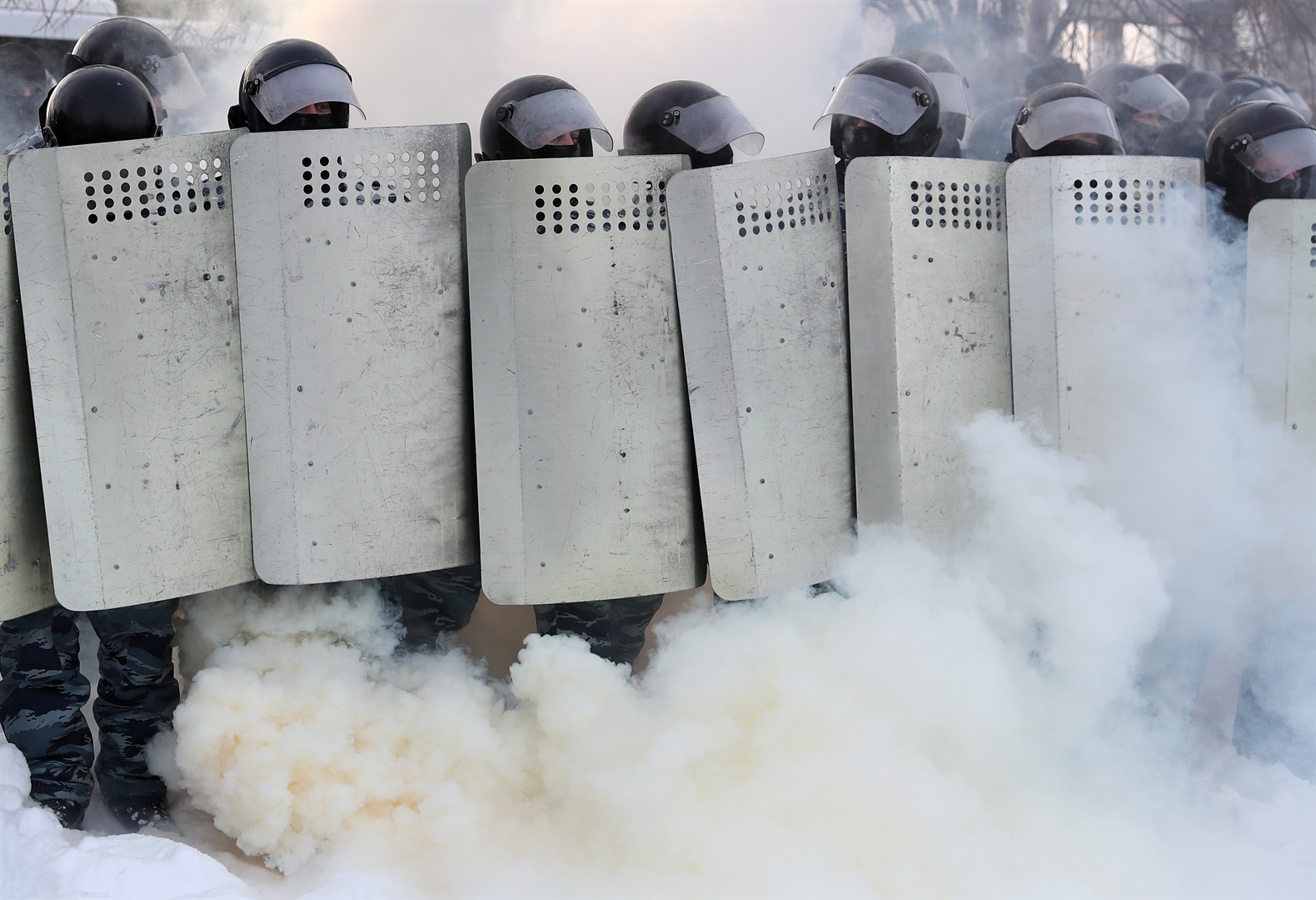 Riot police officers align their shields during protests in support of Russian opposition activist Alexei Navalny in Yekaterinburg, Russia.
Donat Sorokin\TASS via Getty Images
Price went on to call for the "unconditional release" of Navalny and protesters detained on Saturday. On Thursday, the Biden administration said it would "work to hold Russia to account for its reckless and adversarial actions, including "its use of chemical weapons against opposition leader Alexei Navalny."

Navalny's allies are hoping the protests lead to his release - again

Leonid Volkov, a close ally of the opposition, said he hopes the pressure of the protests will force the Kremlin to release Navalny, as they have in the past."We know the Kremlin fears mass demonstrations," Volkov told Reuters. "We know the Kremlin has never failed in recent years to bend one way or the other if the demonstrations were powerful and strong enough."Navalny established himself as the leader of the Russia of the Future party and the founder of the Anti-Corruption Foundation and has served as a foil to Putin since the former Kremlin official was elected president in 2012.  A 2013 Wall Street Journal article described Navalny as "the man that Putin fears most," which may have, ironically, helped cultivate his popularity in Russia."I'm on the very blackest part of the blacklist," Navalny told the Journal in 2013, noting that his public appearances are often banned or severely edited from official Russian media. "Sometimes, it seems to me that there is a small crazy guy in the Kremlin who works for me. Relatively few people watch such shows. But because they banned it, there are millions of Russians now who wonder, 'Who is he?'"In 2013, Navalny was sentenced to five years in prison for allegedly embezzling more than $500,000 worth of lumber from the Kirovles timber company in 2009 and selling it. But thousands took to Moscow's streets to protest the sentencing, and a day later, Navalny was released. There is also fear that the Kremlin may double down on its punishments. Putin was said to have been particularly irked by a recent 90-minute video Navalny uploaded to Youtube that claimed the Russian president had built an ostentatious $1.4 billion complex on Russia's Black Sea funded by stolen money. The video has been watched more than 50 million times.

"Putin has a palace that was built with stolen money, and Putin is himself a thief," one protester in Moscow told The New York Times.

Putin's Press Secretary Dmitry Peskov dismissed Navalny's claims as "pure nonsense and patchwork," according to the Russian outlet Meduza. While the protests raged on Saturday, Putin remained quiet, other than to offer his condolences on the passing of longtime TV journalist Larry King, according to the Russian state media outlet Ria Novosti.  Peskov told reporters: "The president has always appreciated his highest professionalism and unquestioned journalistic authority" of King.
Read the original article on Insider