This year’s Budget is going to be painful.

Apart from a nasty new tax on petrol and diesel, as well as large sin tax hikes, government is hoping to collect R15 billion more from individual income tax in the next year.

In what Finance Minister Tito Mboweni described as a “difficult” Budget, he announced that tax revenue was R15.4 billion less than expected in October last year. He blamed this revenue shortfall and Eskom’s financial demands for “tax adjustments” that will bite South African households.

This after three years of large tax increases. Rates for personal income tax, dividend tax, capital gains tax and VAT have all been hiked.

“To limit the negative impact on economic growth, the 2019 Budget proposals will not increase tax rates in any category. Instead, they will increase collections by not adjusting for inflation,” Treasury said.

Here are some of this year’s tax changes:

For the first time since the early 1990s, there will be no adjustments for inflation in the income tax. Usually, the rate of income tax you have to pay is increased every year to make provision for inflation.

This year, it hasn’t.

This means that if you get a salary hike in line with inflation this year, you will pay more tax.

Government expects to earn almost R13 billion from this manoeuvre.

Still, there have been small increases in the tax thresholds and tax rebates for individual taxpayers this year. This means you will have to earn slightly more to get taxed on your income: 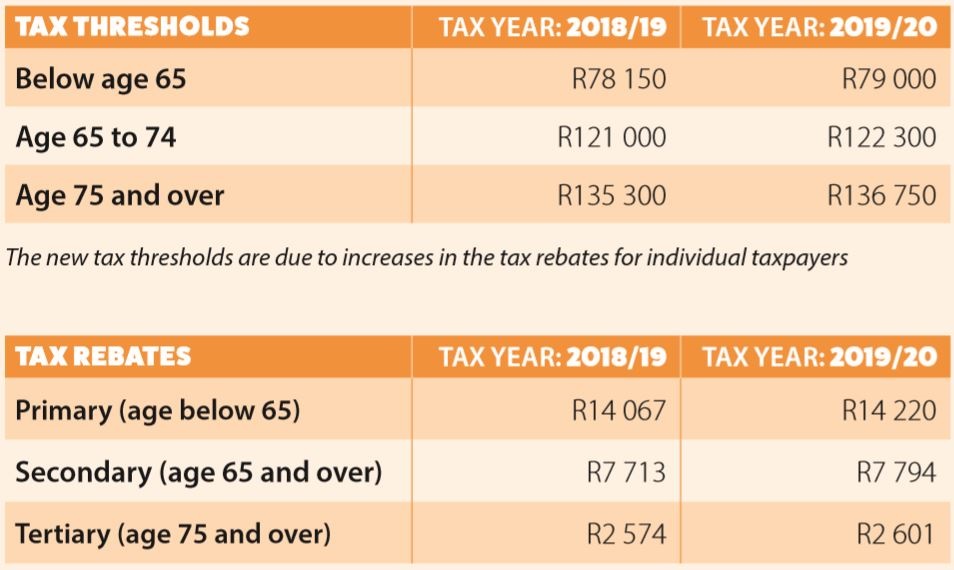 Government has not changed the monthly amount you can deduct for your medical scheme contribution. This remains R310 for the first two members in your household, and R209 per person thereafter. Taking inflation into account, and the fact that membership fees increase every year, this means you will have to fork out more.

A carbon tax on petrol and diesel

In addition to a new hike of 15c per litre in the general fuel levy, plus an increase of 5c a litre in the Road Accident Fund levy, you will now also have to pay a carbon fuel levy of 9c a litre on petrol and 10c on diesel.

Also read: 14 surprises in this year’s Budget – including a new national theatre and a shock fuel tax

While the carbon tax is linked to the new carbon tax on companies, which has just been approved by parliament, the money will flow straight to the government coffers. It won’t be allocated specifically to “green” causes.

The RAF and general fuel levy hikes take effect on April 3, and the carbon tax on June 5.

Excise duties on alcohol, cigarettes and cigars have all been increased by between 7.4% and 9%. (The tax on sorghum beer remains unchanged.) This is what the excise duty on these products will come to:

Excise duties now represent 40% of cigarette prices. “Cigarette makers appear to have absorbed most of the increases last year rather than increasing prices. As a result, the excise burden for cigarettes is likely to remain slightly above the target level.”

Also read: Govt plans to sell some of its non-core assets, including business units at state-owned enterprises – to find money

Government expects to earn R400 million for the tax hike on tobacco products and R600 million on alcohol taxes.

The ‘health promotion levy’ was introduced last year, which applies to cooldrink with more than 4 grams of sugar per 100ml. This year, the tax has been hiked from 2.1c per gram above 4 grams, to 2.21c per gram.

Treasury has warned that it will implement tax on e-cigarettes, but no starting date has been confirmed.

Treasury warns that it is noting concerns about tax abuse at duty-free shops. SARS has pledged to investigate these shops, which have been proliferating, according to Mboweni.

Some good news: From next month, employers can claim R1,000 per month in tax incentive for young employees earning up to R4,500 – up from R4,000 previously.

There has also been a small increase to the deemed subsistence allowance amounts which employers can pay to employees who travel overnight on employer business, says Barry Knoetze, associate director of PricewaterhouseCoopers.