The Russian FIFA World Cup was opened in Luzhniki Stadium, Moscow, on Thursday afternoon–  and left most scratching their heads.

In sharp contrast to South Africa’s 2010 opening spectacular, the Russian opening only lasted 15 minutes, and had little to write home about.

It featured British singer-songwriter Robbie Williams performing some of his most successful singles including ‘Let Me Entertain You’, ‘Feel’ and ‘Angels’.

A bird-installation was seen crossing the field, while tens of performers spelt out the word ‘love’ on the soccer pitch – while activist Peter Tatchell is still being detained in Moscow for protesting Russia’s treatment of LGBTI+ people.

On social media, users called Russia out for having a ‘boring’ opening ceremony.

“Of all the human rights abuses you can level at Russia, having Robbie Williams perform at the opening ceremony is probably the worst,” @GeordieDavid tweeted. Shakira's performance of Waka Waka with local afro-pop group Freshlyground went down with little to no controversy, while William's used his performance to throw a rude sign at millions of people watching around the globe.

South Africa had a burning calabash – Russia had a bird The South African world cup opening ceremony had a calabash, a mug used at traditional gatherings, while the Russian World Cup had a brightly coloured yellow and red bird. 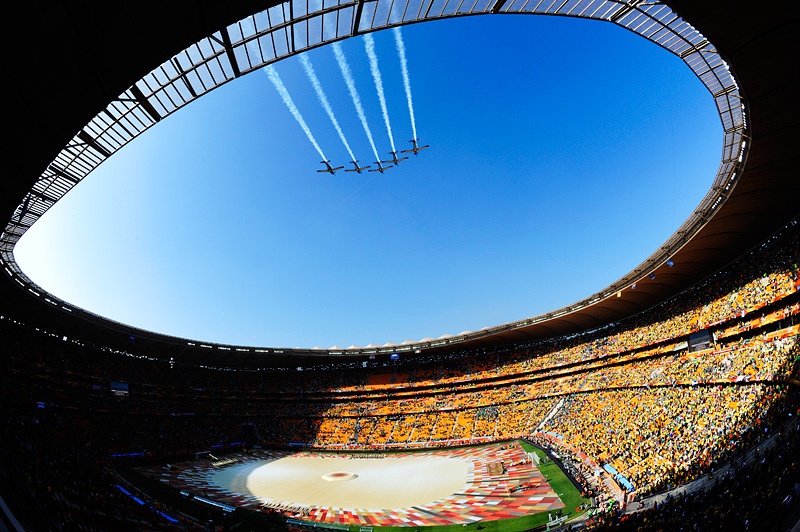 If that left you nostalgic for the 2010, here Shakira's performance of Waka.

Related Links
Moscow is getting a giant vuvuzela – in the colours of the Russian flag – to broadcast World Cup...
Sweden is telling its citizens to prepare for crisis or conflict — and it's 'becoming a bit of a...
Russia says it has deployed its Uran-9 robotic tank to Syria — here's what it can do
Next on Business Insider
The EU has a Russian gold ban in its sights as it hammers out its next round of sanctions – report