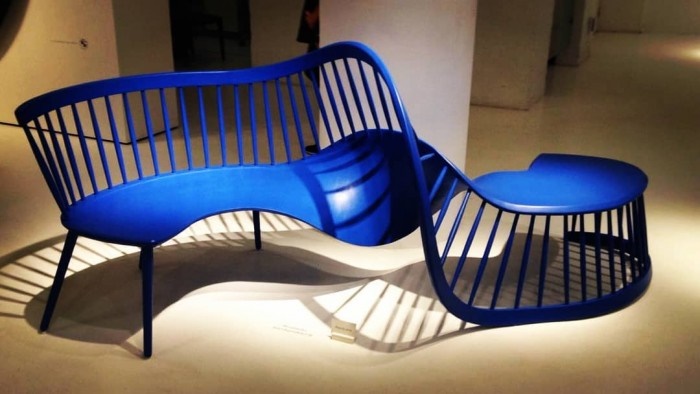 A twisted love seat has been named South Africa's most beautiful object in 2019 at this year's Design Indaba, an annual conference for the creative industries, held in Cape Town.

Houtlander is a relatively new venture by two furniture makers, Phillip Hollander and Stephen Wilson. They produce furniture that reflects South African and Scandinavian craft traditions at their workshop in Roodepoort. No screws or metal fixings are used in their furniture

The bench was nominated by Nandi Dlepu, founder of the creative studio Mamakashaka,

“The manufacturing ability exhibited with this product is applaud worthy, I really love that it’s an abstraction of something familiar. A shakers style love seat with a twist, literally,” said Dlepu.

It was named the most beautiful object by popular vote at the Design Indaba.

Hollander and Wilson said their aim is to manufacture "beautiful, useful furniture that they want to live with".

The love seat originates from the 19th century in the US. Originally it was a sofa for two people, in an S shape with a mutual armrest between them. Courting couples could face each other, but they didn't sit directly next to each other.

These were the winners in previous years: According to the designer, it is an evolution of the iconic ballet outfit mingled with hallmarks of an African counterpart, the Xibelani skirt. Often worn by Tsonga women, the Xibelani skirt is known for its structural, tiered layers and colourful vertical pleats. The design is unisex and can be styled in over twenty different ways, and reflects Ngxokolo's characteristic isiXhosa aesthetic.

His clothing range "MaXhosa by Laduma" - primarily knitwear - has emerged as one of South Africa's fastest-growing fashion exports, It is garnering celebrity endorsements from across the globe - including from the new "carioca funk" phenomenon in Brazil, Dream Team do Passinho, to Beyoncé and Alicia Keys.

Related Links
We used Google’s visual search app to find bread and furniture – but it failed to recognise a...
All Apple employees now get standing desks — and Tim Cook has said that 'sitting is the new cancer'
This sofa inspired by Marilyn Monroe’s lips just sold for R70,000 – but SA wasn’t ready to pay...
Next on Business Insider
I tried the pizza pasta dish that's taken over TikTok. I may never be able to eat cheese again.