34 things you should remove from your résumé immediately Every job application starts with a résumé.

Hiring managers gather résumés to determine when to interview promising candidates — and many use robots to eliminate bad ones before it even reaches a human.

If you want to pass that test, you need to have the perfect résumé to highlight your qualifications.

Here are 34 things you should never include on your résumé.

Don't put an "objective" on your résumé. If you applied, it's already obvious you want the job.

The exception: If you're in a unique situation, such as changing industries, it may be useful to include a short summary.

Don't put your hobbies on your résumé.

If it's not relevant to the job you're applying for, it's a waste of space and a waste of the company's time. A CareerBuilder survey asked 2,000 hiring managers for memorable résumé mistakes, and blatant lies were a popular choice. One candidate claimed to be the former CEO of the company to which he was applying, another claimed to be a Nobel Prize winner, and one more claimed he attended a college that didn't exist.

Rosemary Haefner, chief human resources officer at CareerBuilder, said these lies may be "misguided attempts to compensate for lacking 100% of the qualifications specified in the job posting."

"Hiring managers are more forgiving than job seekers may think," Haefner explained. "About 42% of employers surveyed said they would consider a candidate who met only three out of five key qualifications for a specific role."

Yes, you might have been the "king of making milkshakes" at the restaurant you worked for in high school. But unless you are planning on redeeming that title, it's time to get rid of all that clutter.

But as Alyssa Gelbard, a career expert and founder of the career-consulting firm Résumé Strategists, pointed out, past work experience that might not appear to be directly relevant to the job at hand might show another dimension, depth, ability, or skill that's relevant.

Only include this experience if it really showcases additional skills that can translate to the position you're applying for.

You don't need to disclose your relationship status in a professional résumé.

This might have been the standard in the past, but all this information is now illegal for your employer to ask from you, so don't include it.

Putting your age on your résumé could be a hindrance. 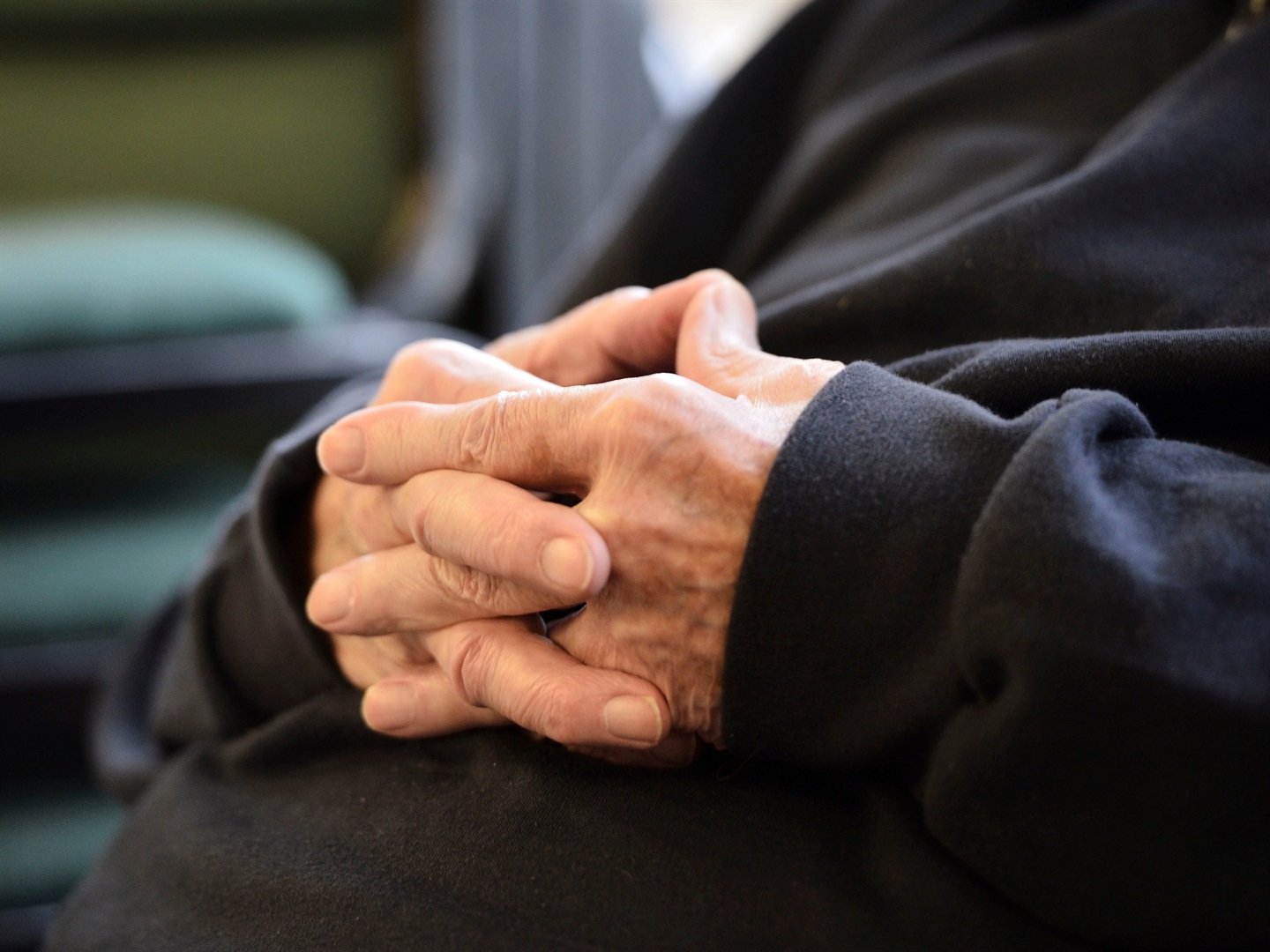 If you don't want to be discriminated against for a position because of your age, it's time to remove your graduation date, said Catherine Jewell, the author of "New Résumé, New Career."

Another surprising way your résumé could give away your age: double spaces after a period.

The format of your résumé is just as important as its content, said Amanda Augustine, a career-advice expert and spokesperson for TopResume.

She said the best format is one that will make it easiest for the hiring manager to scan your résumé and still be able to pick out your key qualifications and career goals.

Once you pick a format, stick with it. If you write the day, month, and year for one date, then use that same format throughout. When you use a 0.5-inch margin and 8-point font size to get everything to fit on one page, this is an "epic fail," said J.T. O'Donnell, the founder of the career-advice site Careerealism.com and author of "Careerealism: The Smart Approach to a Satisfying Career."

She recommended lots of white space and no more than a 0.8-inch margin. If you took time off to travel or raise a family, Gelbard recommended not including that information on your résumé. "In some countries, it is acceptable to include this information, especially travel, but it is not appropriate to include that in the body of a résumé in the US." If your employers want to speak to your references, they'll ask you. Also, it's better if you have a chance to tell your references ahead of time that a future employer might be calling.

If you write "references upon request" at the bottom of your résumé, you're merely wasting a valuable line, career coach Eli Amdur said. Your résumé shouldn't include the words "I," "me," "she," or "my," said Tina Nicolai, executive career coach and founder of Resume Writers' Ink.

"Don't write your résumé in the third or first person. It's understood that everything on your résumé is about you and your experiences."

Refrain from using the present tense to talk about a past job.

Don't use a less-than-professional email address. If you still use an old email address, like BeerLover123@gmail.com or CuteChick4life@yahoo.com, it's time to pick a new one.

You don't need to put 'phone' before listing your cell number.

Amdur said there is no reason to put the word "phone" in front of the number.

"It's pretty silly. They know it's your phone number," Amdur said. The same rule applies to email.

Your résumé is not the place for headers, footers, tables, images, or charts.

While a well-formatted header and footer may look professional, and some cool tables, images, or charts may boost your credibility, they also confuse the applicant-tracking systems that companies use, Augustine told Business Insider.

The system will react by scrambling up your résumé and spitting out a poorly formatted one that may no longer include your header or charts. Even if you were an ideal candidate for the position, now the hiring manager has no way to contact you for an interview.

Don't include your boss' name on your résumé. "Companies often have their own internal names for things like customised software, technologies, and processes that are only known within that organisation and not by those who work outside of it," Gelbard said. "Be sure to exclude terms on your résumé that are known only to one specific organisation."

Social-media handles that are not related to the targeted position should be kept off your résumé. Links to your opinionated blogs, Pinterest page, or Instagram account have no business taking up prime résumé real estate. "Candidates who tend to think their personal social media sites are valuable are putting themselves at risk of landing in the 'no' pile," Nicolai said.

"But you should list relevant URLs, such as your LinkedIn page or any others that are professional and directly related to the position you are trying to acquire," she said.

You don't need more than 15 years of experience. When you start including jobs from before 2000, you will lose the hiring manager's interest.

Your most relevant experience should be from the past 15 years, so hiring managers only need to see that, Augustine said.

On the same note, never include dates on education and certifications that are older than 15 years.

The résumé is not the place to disclose salary information. "Some people include past hourly rates for jobs they held in college," Nicolai says. This information is completely unnecessary and may send the wrong message.

Amy Hoover, president of Talent Zoo, said you also shouldn't address your desired salary in a résumé. "This document is intended to showcase your professional experience and skills. Salary comes later in the interview process."

Don't use an old-fashioned font. "Don't use Times New Roman and serif fonts, as they're outdated and old-fashioned," Hoover said. "Use a standard, sans-serif font like Arial."

Also, be aware of the font size, she said. Your goal should be to make it look nice and sleek — but also easy to read.

Don't use fonts that are hard to read. Curly tailed fonts are also a turn-off, according to O'Donnell. "People try to make their résumé look classier with a fancy font, but studies show they are harder to read and the recruiter absorbs less about you."

Try not to use buzzwords. CareerBuilder asked 2,201 US hiring managers: "What résumé terms are the biggest turnoffs?" They cited words and phrases such as, "best of breed," "go-getter," "think outside the box," "synergy," and "people pleaser."

Terms employers do like to see on résumés include: "achieved," "managed," "resolved," and "launched" — but only if they're used in moderation.

Don't reveal your reasons for leaving your company. Candidates often think, "If I explain why I left the position on my résumé, maybe my chances will improve."

"Wrong," Nicolai said. "Listing why you left is irrelevant on your résumé. It's not the time or place to bring up transitions from one company to the next."

Use your interview to address this. Once you're out of school, your grades aren't so relevant.

If you're a new college graduate and your GPA was a 3.8 or higher — it's OK to leave it. But, if you're more than three years out of school, or if your GPA was lower than a 3.8, don't include it.

You don't need to include an explanation of why you want the job. That's what the cover letter and interviews are for.

Your résumé is not the place to start explaining why you'd be a great fit or why you want the job. Your skills and qualifications should be able to do that for you — and if they don't, then you're résumé is either in bad shape, or this isn't the right job for you.

Keep photos of yourself off your résumé. The traditional answer to this question is no. But there are some exceptions, like if you're an actress or a model, career expert Alison Doyle wrote in a post for The Balance Careers.

"The rationale for excluding photos has been to protect employers from allegations of discrimination based on race, age, weight, gender, attractiveness, or personal style," she wrote. "Plus, many employers are eager to avoid unconscious bias in their recruitment, using strategies like removing college and candidate names from resumes before reviewing them."

The résumé is the place for facts, not opinions.

Don't try to sell yourself by using all sorts of subjective words to describe yourself, O'Donnell said. "I'm an excellent communicator" or "highly organised and motivated" are opinions of yourself and not necessarily the truth. "Recruiters want facts only. They'll decide if you are those things after they meet you," she said. Avoid including a job on your résumé if you only held the position for a short period of time, Gelbard said. You should especially avoid including jobs you were let go from or didn't like.

Regurgitating what you do all day without describing the value you add to companies does not impress hiring managers, Celeste Joy Diaz, a recruiting manager at Amazon, told Business Insider.

Instead, Diaz suggested specifying with numbers and data how you moved your company forward. Using the winning phrase "I created a solve for X amount of customers and it saved X amount of money, using X skill" can help applicants stand out, Diaz said. Being specific with your job title, and use the same description an employer would type, Ian Siegel, cofounder and CEO of the employment marketplace ZipRecruiter, told Business Insider. While it may seem like a good way to attract attention, save Bitmojis and other emojis for Snapchat.

Thirty-five percent of senior managers, surveyed by staffing firm Robert Half, said that using these types of images hurt applicants.

"Steer clear of including anything that could be considered distracting or unprofessional, such as flashy fonts and images," says Michael Steinitz, executive director of Accountemps. 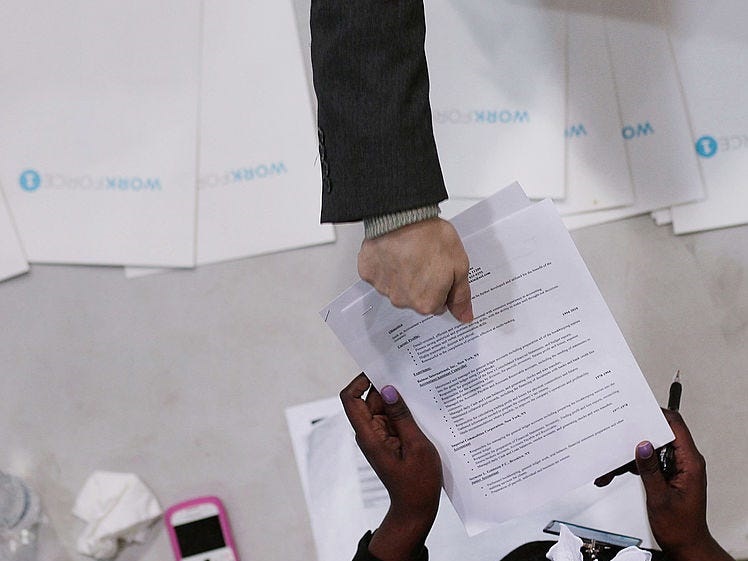 When you're applying for a job, using black text and a white background is best, the Robert Half survey found.

Colourful fonts or backgrounds also hurt job applicants, the survey found as well. About 25% of senior managers said that was a negative on application materials.

Get rid of distracting boxes and borders. "As a result, key details and messaging can get lost, which impacts the impression you make on a potential employer or key contact," Gelbard said.