What happens now Theresa May has announced her resignation? 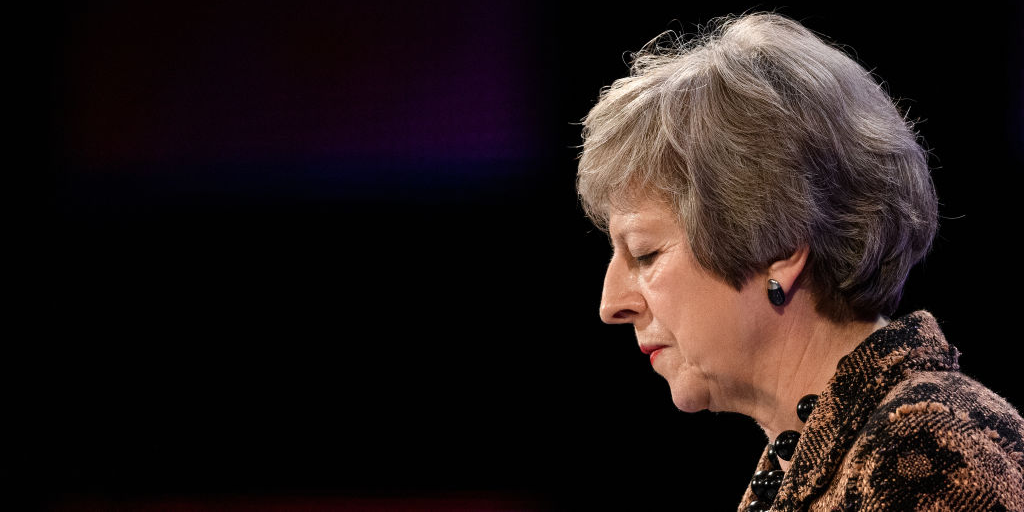 LONDON - Theresa May will stand down as Conservative party leader on Friday, June 7.

The beleaguered prime minister announced on Friday morning that she would resign next month after failing to deliver the United Kingdom's exit from the European Union and losing the support of Conservative MPs.

It means that the UK will have a new prime minister this summer and a new figure in charge of Brexit.

Here's how the process will work.

May will stay as prime minister for a few more weeks Donald Trump and Theresa May during the US president's visit to Britain in July.
Getty

Under the plans revealed on Friday, May will resign as Conservative party leader in two weeks time but stay on as prime minister until the Conservative Party has chosen her successor.

However, before then, May will welcome US President Donald Trump to the UK for his highly-anticipated state visit on June 3-5, and lead the country as prime minister during D-Day commemorations.

May wanted to remain as prime minister during this time so she was not "undermined by the unseemly spectacle of Tory MPs and ministers scrabbling and scrambling to replace her" when Trump visits, ITV's Robert Peston reports. The primary reason for May's departure is her failure to deliver Brexit.

The prime minister has delayed the UK's departure twice - Brexit was meant to have taken place nearly three months ago, on March 29 - and failed to convince MPs to back her withdrawal deal with the EU on three occasions.

Nonetheless, before she hands over to her successor, May is set to try and make at least some progress on Brexit by getting the less controversial aspects of her deal through Parliament, according to The Times.

A source close to Brexit Secretary Stephen Barclay told the newspaper: "Parliament needs something to do until the end of July and it would be helpful to whichever leader is elected to have some of the legislation in place given the October 31 deadline."

The report adds that May could put less contentious parts of her deal like citizens rights and the transition period to votes in the House of Commons. Her successor won't have much time to deliver Brexit until the October 31 deadline.

The contest to replace her will begin The contest to replace May as Conservative party leader and prime minister will officially get underway on June 10.

The race - which unofficially got underway many weeks ago - is set to involve at least 10 Conservative MPs.

The timetable for this process has not yet been confirmed.

However, party authorities will be keen to install a new leader within good time to allow a new leader time to shape the Brexit process before the end of the six month extension due to finish at the end of October.

Conservative MPs will spend a few weeks whittling the rather long shortlist down to just two before the Conservative party membership chooses the winner.

The final two will then take part in a series of hustings around the country before they choose a new leader and the UK's new prime minister.

A new prime minister with the same problems

The UK will likely get its new prime minister at some point in July.

Incoming leaders typically enjoy some sort of bounce in the opinion polls at this point. However, the problems that hamstrung May so severely will not simply disappear.

The House of Commons remains intractably divided over Brexit and with the EU adamant that the current withdrawal deal is the only deal in town, it is unlikely that May's successor will be able to negotiate anything substantially different.

If the new prime minister were to go for a no-deal Brexit, as supported by a majority of Conservative party members, they would face an almighty battle with the House Commons, which has repeatedly made clear its opposition to leaving without a deal.

Ultimately it could lead to MPs voting to bring down the government and a general election would almost certainly follow.

Alternatively, the next leader could decide that a new referendum would be the only way to break the deadlock.

However, it is vehemently opposed by most Tory MPs, and even the suggestion that a parliamentary vote on one could take place was enough to force May out.

In short, the new prime minister, whoever that may be, has an almighty task on their hands to fix Britain's political crisis and it remains far from clear how they will be able to succeed where May has failed.

Related Links
Boris Johnson's long list of gaffes, offensive comments and controversies
Theresa May agrees to set out resignation plans if her Brexit deal is defeated again
Theresa May told by Conservative MPs to set out her resignation plans by the end of today
Next on Business Insider
Video shows Western fighters ambushing Russian armoured vehicle in Ukraine with rocket launcher