The rand is undervalued by 62% against the dollar, according to new numbers crunched by The Economist as part of the Big Mac Index.

The index compares the buying power of currencies. This makes it the most underpriced major currency in the world, according to the publication, and in a worse position than the Russian rouble and the Turkish lira, which are both undervalued by 61%. 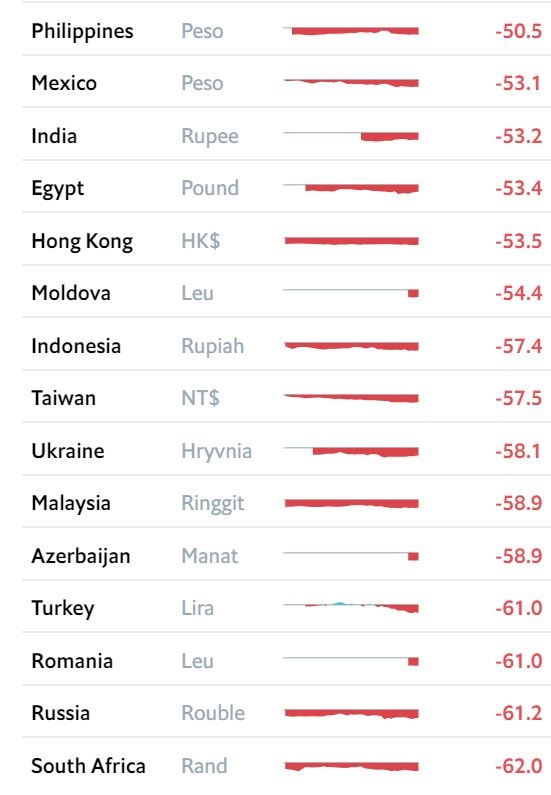 Since 1986, The Economist has been using McDonald's Big Mac burger prices to determine whether currencies are overvalued, or too cheap.

The Big Mac Index is based on the theory of purchasing-power parity. It says that in the long run, exchange rates ought to adjust so that an identical product – in this case, a Big Mac burger – should cost the same across countries.

Read: This is what a Big Mac cost a decade ago – and it’s a depressing reminder of how far the rand has fallen

The Economist says the Big Mac index has become a global standard, which is featured in economic textbooks and dozens of academic studies.

The latest Big Mac index shows that most currencies lost ground against the dollar over the past six months. Only the Swiss (+18%) and Norwegian (+5%) currencies are now overvalued against the dollar. The euro (-19%), the Australian dollar (-21%) and the British pound (-22%) are all undervalued.

A decade ago, the rand was trading at R8.28 to the dollar and the Big Mac index found that it was “only” undervalued by 39% against the dollar.

Since then the currency has weakened substantially and is now trading around R14.40/$. If it were to trade in line with Big Mac parity, it would be at R5.50/$.

This seems to be a bit of a stretch, but there is some hope. According to The Economist, an analysis of data going back to 1986 shows that currencies deemed undervalued by the Big Mac index tend to strengthen, on average, in the subsequent ten years.

Related Links
2020: Expect more expensive food, and higher tax
This Wits graduate travels around the world to invest in startups - a job that earned him almost...
US population growth is the lowest its been since 1918. Here's why that's terrible news for its...
Next on Business Insider
Americans now pay an average of R12,000 per month on their cars