(Supplied: Archilovers)
Hong Kong architect James Law is nearing completing on the construction of a building whose design was inspired by an iPod and is filled with so much technology that he likens it to Iron Man's suit of armour.

The building, known as The Pad. and once called the iPad Tower, has been under construction in Dubai's Business Bay since 2006. After more than a decade of work, the building is set to open later this year.

The building is the culmination of Law's architectural approach, which he says aims to fuse technology, software, and architecture to create structures that are more responsive to the needs and desires of people today.

Architecture "used to just be about the concrete, steel, and the glass, and the shape of a building. But now I think we're living in a world where those materials are just the basic materials," Law said. "There are now new materials like technology, smart material, bytes of content, and interactivity."

Law's design for The Pad, which mimics the shape of an iPod tilted in a docking station, won an international competition in which he beat out renowned architects Zaha Hadid and Norman Foster.

The 24-story tower contains 231 "intelligent" apartments that include a virtual reality projection wall that changes locations, a bathroom that analyzes residents' health in real time and displays reports on the mirror, and RFID tags instead of keys for apartments.

Law compared the building's ability to augment the lives of its inhabitants to the armour that comic book hero Iron Man wears.

"In this sense, once you put this armour on, you have extra capabilities and extra possibilities about how you can experience life," Law said. Like the Iron Man armor, he added, the apartments are "able to adapt to the environment."

The Pad is due to be opened later this year after a decade of work. The building is tilted at a 6.5 degree angle to mimic an iPod in a dock. It is the culmination of Law's "Cybertecture" philosophy to architecture.

"Some bricks are the old clay bricks and the concrete bricks, and then there are the new bricks, which are technology, the new bricks of new ideas, new strategies, new forms, new models, new typologies," Law said.

The Pad has 231 "intelligent" apartments with various features that enhance the capabilities of those who live in it, including health monitoring, air filters, and virtual reality walls. Law believes that in the future residents will be able to add features to their apartments in the way one downloads apps from Apple's App Store.

The lights and music in the apartment can be customized to mirror the moods of residents. For example, the lights can shift color if someone rings the doorbell, calls the phone, or a favorite television program is about to start.

Law sees The Pad as a next-level smart home where heating and security can be monitored from your smartphone. "You'll be able to really maintain or keep a relationship with your home," he said.

"Architecture is no longer just this piece of concrete that sits there," said Law. "We're all living a life where we've been tuned to interacting with the the environment, interacting through the internet."

Law calls his approach cybertecture, "a kind of philosophy about architecture and the way in which we build our model building and cities in the world, where I believe architecture with the old, big A is a little outdated now."

Cybertecture, according to Law, utilizes more than just architects. Instead, it requires the collaboration between architects, researchers, engineers, designers, and multimedia creators to make buildings that are "relevant for the world now."

The apartments have a feature called iReality, which is a virtual reality projection that can be linked with views 62 different world destinations. The wall can also be used to video chat with friends and family.

The bathroom includes smart features that allow it to monitor residents' weight, blood pressure, internal temperature, and other metrics to provide a snapshot of the resident's health on the mirror.

Law wanted his building to match an iPod by having "software inside that helps you curate the enjoyment of your life, your music, your photos."

"We are all connected through information technology," Law said. "You can't live in isolation with a piece of architecture anymore, so that architecture becomes in itself just like a mobile phone ..."

The building was originally due to open in 2010, but construction had to be paused because of economic difficulties. It will be completed in 2018.

The Pad isn't Law's only innovative project. For example, he has been working on the O-Pod — a 100-square foot apartment retro-fitted from a concrete water pipe that offers a small home for an affordable price to young renters in the high-cost city of Hong Kong. 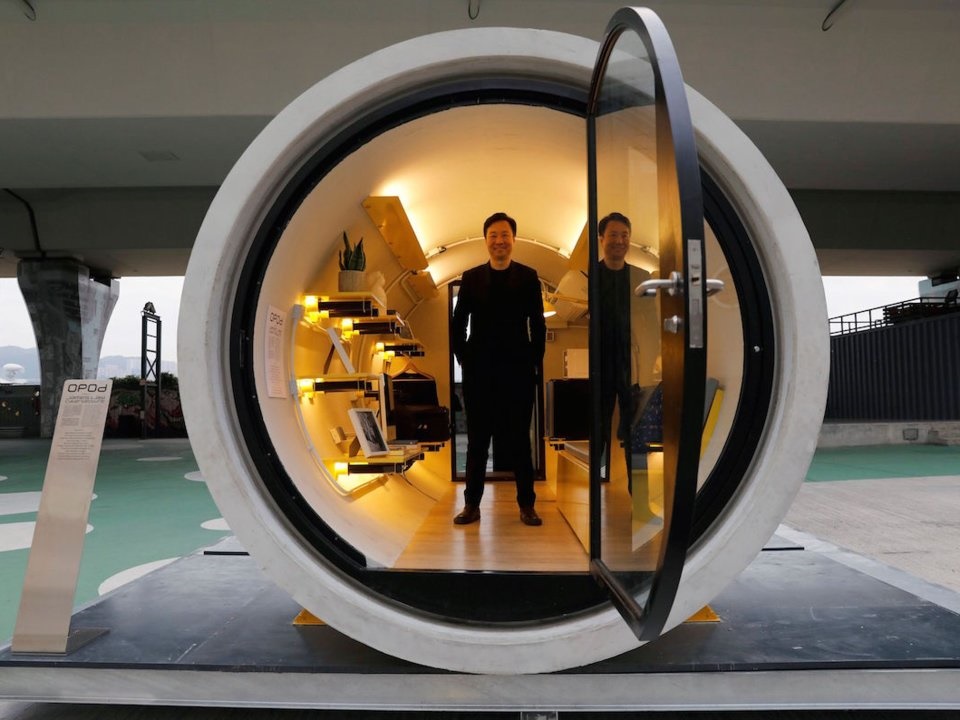