Late on Wednesday afternoon the primary South African government account deleted a tweet that had said a ban on alcohol and cigarettes would be in place "throughout the lockdown period".

"This account posted a tweet earlier today which said that the ban on the sale of alcohol and cigarettes would remain in place throughout the lockdown period," read a new tweet. "This is incorrect. The sale of alcohol and tobacco products is prohibited under the current Level 3 regulations."

"This decision may be reviewed at any time by the relevant structures should the conditions which necessitated it change. We regret any confusion the tweet has caused," read a second reply tweet.

The original article follows below.

The ban on cigarettes and alcohol will remain in place as long as South Africa is in lockdown, the government said on Wednesday.

"The purpose is to save lives and protect the health and well-being of our people," said the government's primary Twitter account, attaching week-old talking-point graphics from the department of health.

The health department had not indicated the bans would be indefinite. 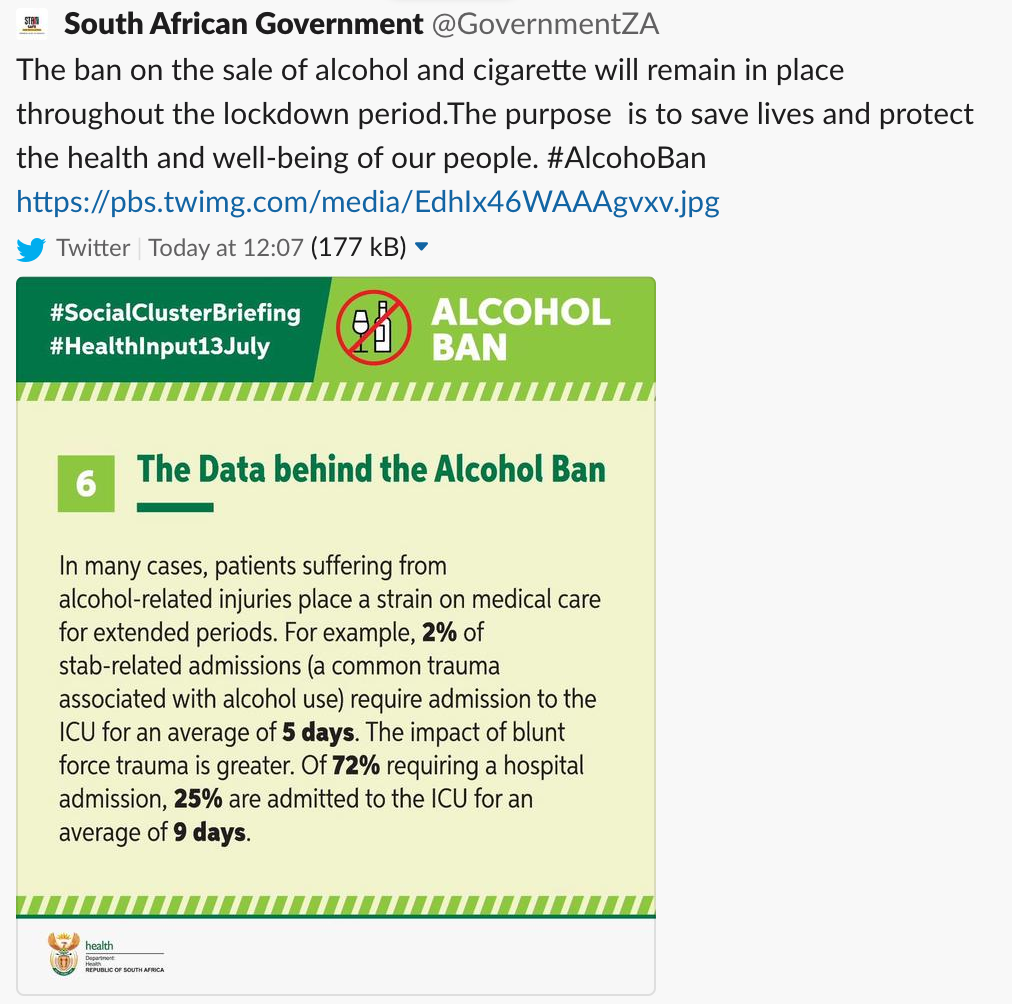 Cabinet had previously toyed with the idea of differential lockdowns, depending on the severity of the coronavirus epidemic and the preparedness of the health system in any given area. That idea had apparently been abandoned in part for fear that alcohol would be smuggled across provincial or metropolitan borders, if booze sales were banned in one place but not in neighbouring areas.

The government had also, apparently, taken into consideration the pleas of financial hardship from the likes of restaurants in – temporarily, as it turned out – lifting the ban.

Restaurants now say they can not survive the alcohol ban much longer, and have pleaded with President Cyril Ramaphosa to consider alternatives such as to allow two drinks with every main meal in sit-down establishments.

What was apparently never considered was the advice of the SA Medical Research Council (SAMRC) – which is thought to have provided the arguments for the reimposition of the total ban on booze.

In mid-July, the Council briefed Parliament on its recommendations, and said that a total ban on alcohol might be the most effective in freeing up hospital and emergency resources, but comes with other trouble.

A combination of other interventions, it said, though more challenging to implement, would likely "prevent push-back from the public" and "might also make it easier to defend legal challenges".