‘This life sometimes is so unfair.’ How the world responded to the Caster Semenya ruling

Semenya, who has naturally high testosterone levels, has been battling the International Association of Athletics Federations (IAAF) since 2009 after she was first subjected ‘sex testing’

In its ruling, the court of Arbitration for Sport said although the rules are "discriminatory...such discrimination is a necessary, reasonable and proportionate means of achieving the IAAF's aim of preserving the integrity of female athletics in the Restricted Events."

Also read: This South African ran a marathon every day for 50 days - here are his 4 best tips to start running

The Monaco-based International Association of Athletics Federations (IAAF) said it is grateful for the ruling as it gives runners hoping to participate in the world championships at the end of the year, time to begin medicating.

In a statement, Semenya said that "for a decade the IAAF has tried to slow me down."

"But this has actually made me stronger. The decision of the CAS will not hold me back. I will once again rise above and continue to inspire young women and athletes in South Africa and around the world."

This is how the international media and other athletes responded to Semenya’s ruling.

The Guardian (United Kingdom): ‘Hormone treatment can pose a health risk for Semenya’ One of the UK’s largest news platforms reported that hormone treatments on women like Semenya has not been tested, and could, therefore, pose a health risk for Semenya. It said hormone treatment can also slow down Semenya by 9 seconds.

Madeleine Pape (Australian Olympic gold medalist): ‘I was sore about losing to Caster Semenya. But this decision against her is wrong’ In a column for The Guardian, Pape - who lost against Semenya in a race in 2009 - wrote that she was once concerned about high testosterone in women’s running, but now realise it is an “outdated and indefensible position”. She said while studying sociology at the University of Wisconsin-Madison in the United States, she realised that “biological sex and athletic ability are both far too complex for scientists to reduce to measures of testosterone.”

The Times of India (India): 'Semenya has taken steps to reinvent her career to become a 5,000-metre runner' The Times of India said Semenya has won the 5,000-metres at the South African Athletics Championship, an event which will allow her to compete outside the IAAF regulations.

The current IAAF regulations are only valid for the 400, 800 and 1500 metres. If Semenya, therefore, chooses to participate in the 5000 metres event, she will not be required to reduce her testosterone levels.

A win for the @iaaforg and for female athletes everywhere. #CasterSemenya will need to take testosterone blockers to compete internationally.

Experts say it will make her 7 seconds slower and an also-ran.

In response to a Twitter user who said Semeny will come back stronger, Hopkins said: “No, sir. Caster Semenya will come back with testosterone levels blocked, seven seconds slower.” Wambui, who has also faced questions over her hormone levels but was never forced to undergo testosterone test, slammed the IAAF for making a “painful” decision.

"This is [the] life we Africans have nothing to say in this world and (there is) nothing we can do about it, so pole (sorry) my dear --- so painful,” Wambui said.

"Everything that happens, happens with a reason Caster."

The Washington Post (US): 'We celebrated Michael Phelps’s genetic differences. Why punish Caster Semenya for hers?' 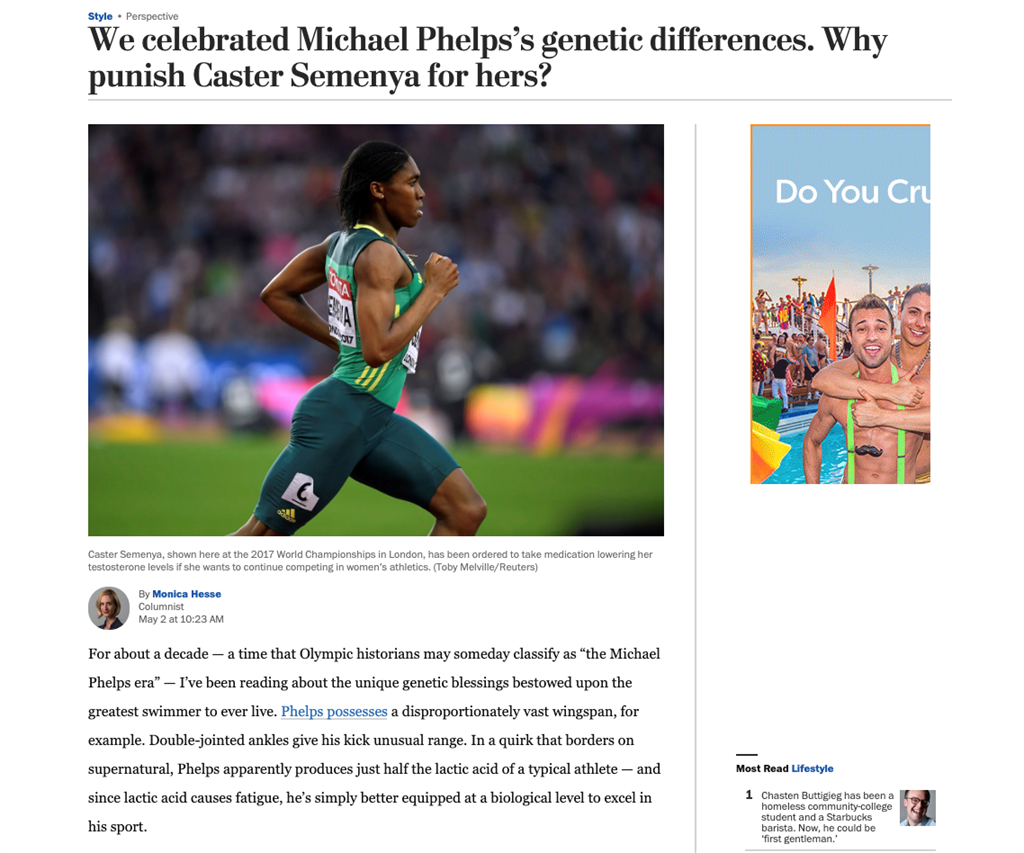 Washington Post columnist Monica Hesse wrote that Michael Phelps - arguably the most successful swimmer in US history - posses a disproportionately vast wingspan and double-jointed ankles which gives his kick unusual range which helps him succeed in Olympics.

Hesse questioned why Phelps is celebrated, but Semenya, which also has an apparent biological advantage, is ridiculed.

Dutee Chand (Indian long-distance athlete): 'She has been made to suffer' Chad, which won a long battle over her own elevated levels of testosterone, said her heart breaks for Semenya.

"This is wrong. I feel sad for her, she has been made to suffer like me," she said.

BBC (UK): Testosterone suppressants would be as "humiliating" as it is medically unnecessary 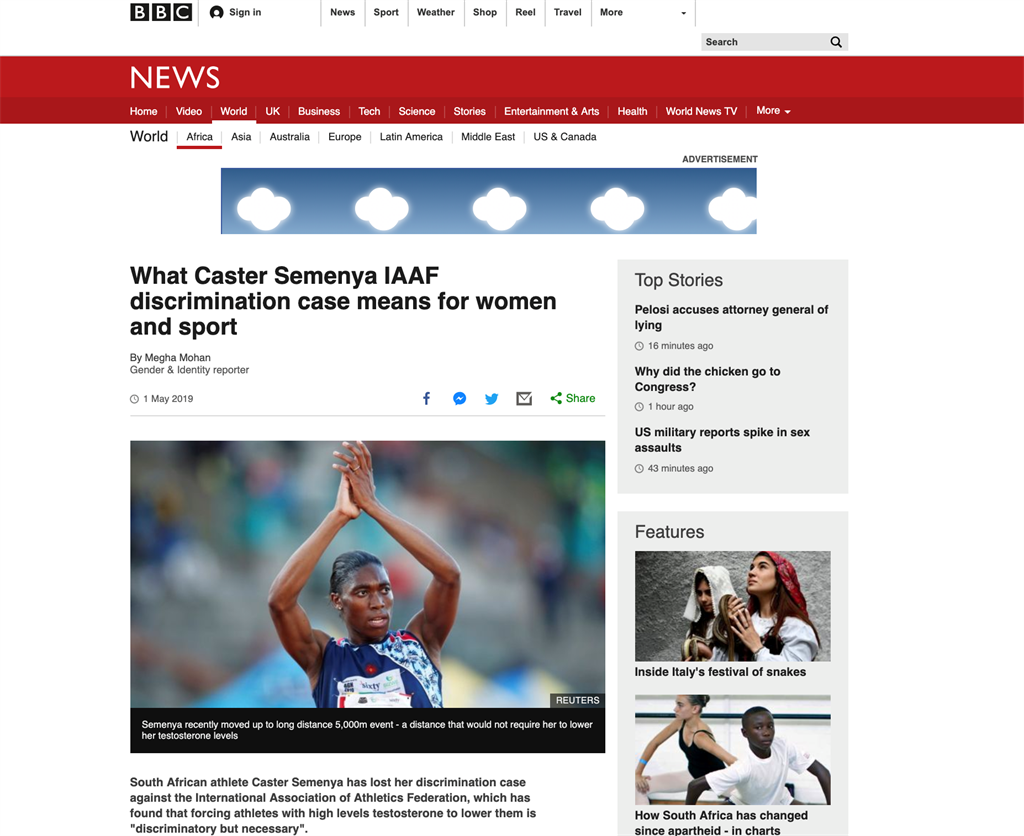 Michael Johnson (US Olympic gold medalist): ‘The ruling was about the fairness of the sport’ Retired US 400 and 200 meter Olympic gold medalist Michael Johnson said Semenya’s ruling is about “the fairness of sport so there is a level playing field.”

“And while it’s no fault of Caster Semenya’s, unfortunately for her, she will have to make a decision to either start taking the medication to reduce her testosterone levels or not be allowed to compete,” he told Reuters in an interview.

Japan Times (Japan): The ruling allows runners to start medicating ahead of the September 28 world championships The New York Times (US):  Hero in South Africa, fights hormone testing on a global stage The New York Times wrote that Semenya is fiercely defended and lauded in South Africa.

The newspaper reported that Semenya has been involved in a drawn-out legal battle over her gender, and plans to appeal the IAAF’s ruling.