Will PPC survive? The 128-year-old cement maker is drowning in debt PPC, the 128-year old cement maker, is buckling under a massive debt burden, which is threatening to sink the company.

It will now reorganise its international business unit - which manages its stakes in its Rwandan, Ethiopian, DRC, Mozambique and Zimbabwean operations - to convince shareholders to inject fresh capital into the company in exchange for new shares.

The Johannesburg-based company needs to restructure its enormous R5.8bn in gross debt, almost two thirds of which (R3.8bn) is mostly dollar-denominated and relates to its operations in Zimbabwe, the DRC and Rwanda. To complicate matters further, the international lenders to its DRC business (called PPC Barnet DRC Holdings) have legal recourse to PPC’s South African business for R2.7bn of that dollar-denominated debt. PPC doesn’t have the money to cover that.

PPC’s DRC operation is held via a 69% stake in PPC Barnet DRC Holdings, which is currently unable to fund debt repayments from operations. Van Wijnen says this situation will not be remedied “any time soon.” That’s why PPC is in the process of recapitalising its international unit by sourcing additional capital from new funders and restructuring existing debt with international lenders. 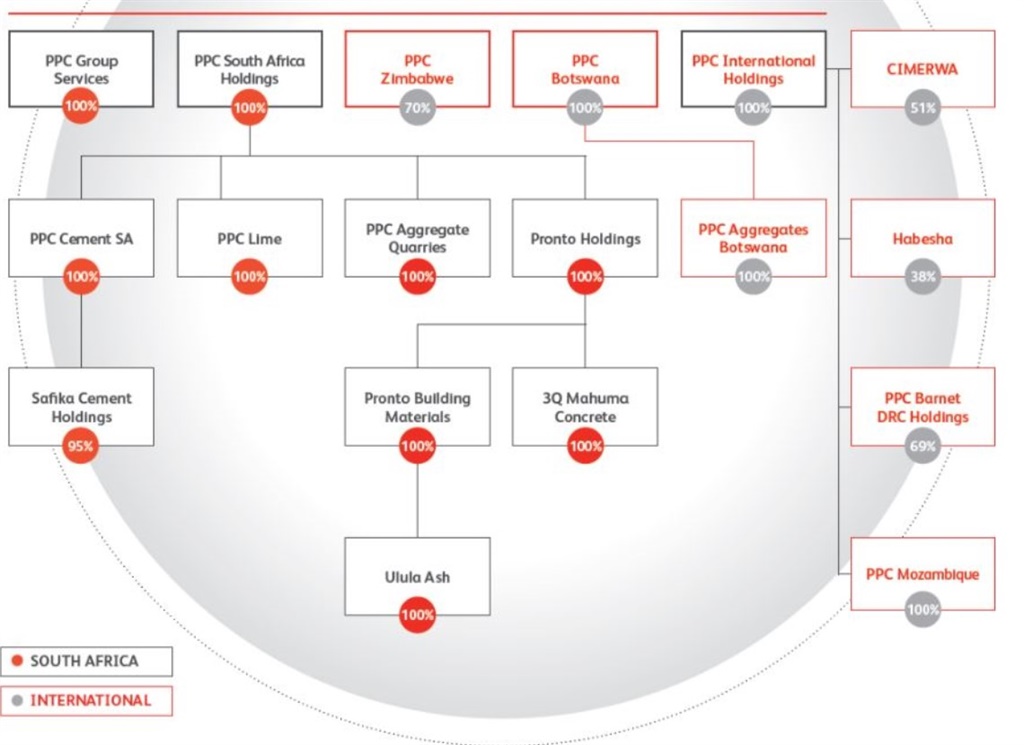 “We think a sustainable debt level for PPC Barnet DRC is below $50m - so the question is what we do with the other $100m,” says Van Wijnen. “That could either involve a debt-to-equity swap with existing lenders; fresh capital from a development finance institution (DFI) or long-term sovereign wealth fund; or a combination of both.”

PPC has committed to conclude the reorganisation of its international business before proceeding with plans to raise additional capital by selling non-core assets such as its lime business as well by issuing new shares. The latter will come by way of a rights issue for between R750m and R1.25bn in new shares. While key shareholder Value Capital Partners has committed to support the rights issue (and underwrite it up to R333m) subject to PPC resolving its DRC debt issues, it remains to be seen whether other shareholders will be as enthusiastic. That’s especially relevant when one considers that the rights issue could exceed PPC’s current market capitalisation of R955.87m.

“If [shareholders] don’t put more money into PPC they stand to lose what they’ve already invested,” says Anthony Clark, a small to mid-caps analyst at SmallTalkDaily Research. “If you don’t follow your rights and take up new shares you run the risk of getting diluted to hell.”

'PPC's debt could sink it'

The fact is that without fresh capital PPC may not survive. The company’s results for the year ended 31 March 2020 included a lengthy “Going Concern Assessment” that outlined whether its debt levels were sustainable. The assessment also highlighted “material uncertainty” about the timing of future cash flows, which could cast “significant doubt” on PPC’s ability to continue as a going concern.

“If you read through all the colourful jargon what they’re saying is that they need the equivalent of their current market cap or more in order to survive,” says Clark. “PPC’s debt could sink it.”

PPC has also revised its debt agreements with South African lenders for its domestic operations. Based on these revised debt arrangements it still has approximately R742m in unutilised facilities, which it says gives it 28% “headroom” to continue operating to end-September 2021. Nevertheless, PPC concedes that if sales underperform forecasts by 20% or more over this forecast period it would probably breach these revised debt covenants.

But Van Wijnen points out: “In the last three months, cement sales volumes in South Africa were 20% to 25% above the same period in the prior year.”

Clark says that PPC’s has strategic value to South Africa and serious consideration should be given to saving the company. In this respect he alludes specifically to the broader investment mandate of the likes of the Public Investment Corporation (PIC) which invests on behalf of the Government Employees Pension Fund (GEPF) and even the Industrial Development Corporation (IDC).

“South Africa cannot afford to not have a domestic cement industry,” he says. “If we rely on imports and the rand goes pear-shaped we run the risk of not being able to produce a key strategic industrial ingredient.”