Yes, bread prices are going to skyrocket. No, you shouldn’t buy a new freezer just for bread. Russia's invasion has sent prices for essential commodities soaring, including wheat, and disrupted wheat exports. The two nations control more than a quarter of the world's wheat exports, and South Africa has imported 30% of its wheat from Ukraine and Russia over the past five years.

If appropriately sealed in a bag, most shop-bought breads freeze well and can be kept frozen for up to six months with no need for additional preservation agents.

But locking in the price of bread now is not a great idea – unless you are already invested in the freezer space.

The initial cost of buying a freezer starts at around R2,599 for a small-sized Hisense chest freezer with 95-litre capacity. (Although upright freezers are considered more convenient, chest freezers store food more economically, according to the Colorado State University's Food and Nutrition research series.)

The smaller the fridge, the less energy it will consume.

You will then have to consider the cost of running the appliance. According to its specifications, the Hisense freezer consumes 0.600kWh per 24-hour cycle, which translates to 219kWh annually and 109.5kWh over the six months bread can be kept frozen.

Then the electricity costs. Electricity tariffs in South Africa vary from municipality to municipality and are complicated to calculate. However, Global Petrol Prices, which tracks different energy retail prices around the world, including electricity, suggests that South Africa's average price for electricity is R2.558 per kWh.

The Department of mineral resources and energy provides an online calculator that tells you how much energy different appliances consume. 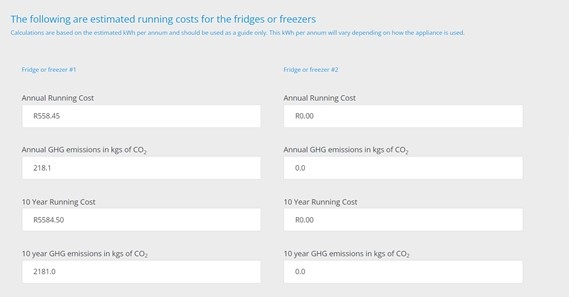 If you run the freezer over six months, the total cost to run should come to R279.20.

The Pietermaritzburg Economic Justice and Dignity group suggests that an average household, typically with seven people, buys 25 loaves of bread a month and spends around R13.80 per loaf, or an average of R345 monthly. If purchased in bulk for home freezing, the total bread cost for six months would be R2,070.

Although freezing bread may save you from future price increases, it is not cost-effective unless you already own the freezer in which you can store bread in bulk. If you had to buy a new freezer, it would cost at least R4,948.20, and if you already had one, it would cost R2,349.20.

At a 13.5% increase in the bread price you would start to break even on the monthly electricity costs – not counting the cost of financing your bread upfront. But add in the cost of a freezer (a little over R54 per month, if amortised over four years) you would need a 30% increase in the price of bread to be in the money, if you can find something useful to do with your new freezer for another 3.5 years.