As the “tiny house” movement sweeps across the world, the demand for luxurious, small homes is also growing in South Africa.

Top-end tiny houses are popular because they offer a cheaper way to get on the property ladder, and a way to pare down your life to the essentials – while still enjoying luxuries.

They are often immaculately designed, surprisingly extravagant, and optimised to use every square centimetre of space.

READ | 35 incredible tiny homes from around the world

Simply put, a tiny home is a fully functioning house, but on in a much smaller scale. They are part of a global architectural trend, which is still growing in the US, Canada, Australia, and New Zealand. Called the Tiny Movement, the trend embraces simple living by decluttering homes and downsizing on space.

“Even though shipping container homes have been around for years, it has only been in the last five years that the building technique has become a viable alternative option,” says Deon van Deventer, founder of Container Home SA. His company has been making container homes from recycled containers in both Johannesburg and Cape Town since 2018. The homes are also fast to build. And with most of the manufacturing being off-site, there is less mess on-site.

“There’s been quite a lot of demand for people looking to build holiday homes or add a separate flat in their backyard. We’re also getting requests from people that live far out of the city, where home owners have struggled to get a building contractor. Or it’s on a near impossible place to build - like plots that stand at a 45-degree angle - and a conventional build would cost a fortune to lay foundations,” says Van Deventer.

Homes can also be expanded in much the same way as Lego fits together.

While the average price of building a home from scratch can be anywhere from R6,000 to R8,000 per square metre, basic container units are usually much cheaper. In some cases, basic units can be comparable in cost to RDP housing, which starts from around R1,500 per square metre. Fitted out, a basic studio container home can come in at around R170,000. Fancier container homes will be much more expensive, though. Take a look at this luxurious home made from four containers, recently erected in the Klein Karoo.

Containers have also been used to construct an apartment complex in Joburg's Maboneng Precinct. 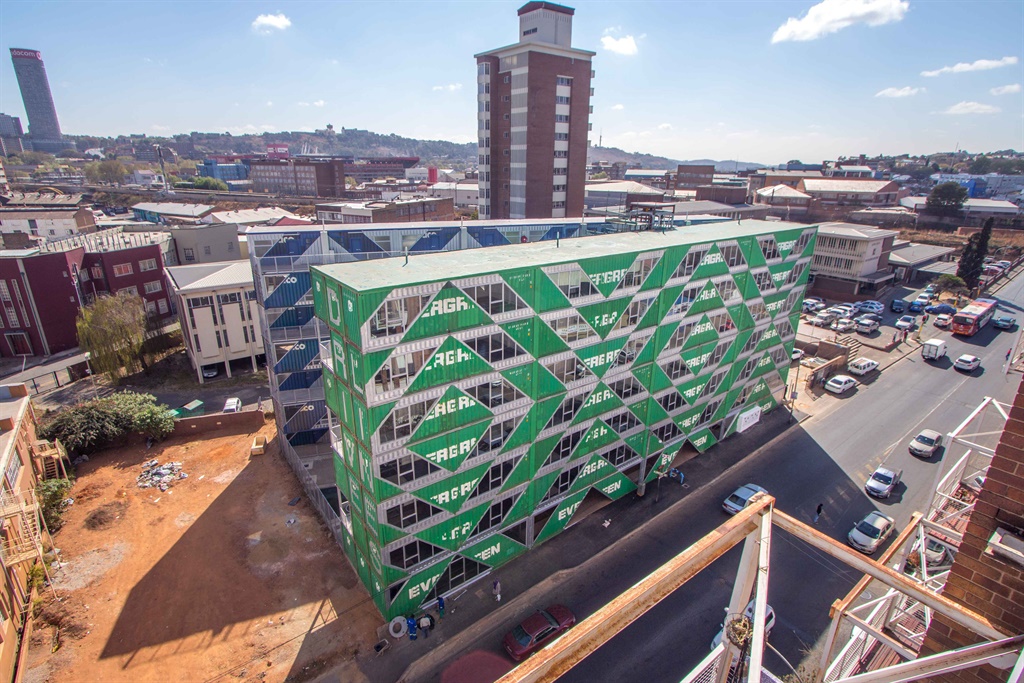 Built in 2017 by architects LOT-EK, Drivelines Studios’ furnished units can be rented for R3,000 a month.

The upcycled ISO shipping containers are organised in a V, with a triangular open yard with swimming pool and sundeck. Here are some other tiny home options in South Africa.

Plant your Pod Idladla on an open piece of land.

Manufactured in Johannesburg, the Pod Idladla is a prefabricated nano-home, starting from R270,000. Several 17-square-metre units can be positioned in various configurations to form larger, multi-use living areas. In order to prove tiny home living was easy, Matt and Kendal Bower moved into their own tiny home. They now manufacture their own range as Wanderlust Co.

Based in Tongaat, KwaZulu-Natal, they make a variety of houses that can sleep up to six people, with the aim of reducing living costs and the negative impact on the environment.

The tiny homes can be easily towed to their next destination. Built by the Biodiversity and Development Institute (BDI), a non-profit company focused on research related to biodiversity conservation, PanGoPods are off-grid, eco-friendly mobile homes. The houses draw inspiration from the pangolin, which can roll up into a tight ball. PanGoPods weight just 3,500kg and can be towed by a large 4×4. They run off of solar power, using water from rainwater harvesting tanks, and have a dry toilet.

Pangopods have a ground floor of roughly 16 square metres and two mezzanine lofts, each of just over 4 square metres, for a total area of nearly 25 square metres. In the Bot Rivier valley on a working farm, the luxurious Copia Eco Cabins can be rented out from R1,650 per night to see if you’ve got a taste for tiny living.

Made from two shipping containers, they each come with a hot tub and a deck. The cabins were designed by South African company Berman-Kalil, which manufactures bespoke tiny homes, shops and even classrooms.

This stunning house in Northcliff was designed by architects A4ac. The small container house was fully prefabricated, and it can be placed on any site which a truck can access. It’s fitted with a kitchen, bathroom, bed, built-in cupboards, gas geyser and stove, and television.

Related Links
It’s official: you can stay in a hotel or resort for fun again – but not an Airbnb
You’ll be able to go on a romantic weekend away soon – as long as you don’t hunt
TAKE A LOOK | This ultra-luxury home in Limpopo is only 3m wide and 'disappears' into the trees
Next on Business Insider
Landmark human study finds a link between 'forever chemicals' in cookware and liver cancer