South Africa is a destination made for road trips - the quality of our national roads is, by and large, pretty decent. And the size of the country means you can encounter diverse landscapes and scenery on a single journey, but it’s also manageable enough to not be too overwhelming.

It’s also pretty easy to break a long trip up with strategic stops in small towns, where campsites and AirBnbs are becoming increasingly common.

With long-haul international leisure travel likely off the cards for a while, there’s no better time to hit the open road - whether you’re going coast to coast, border to border, or just city to city. These are some of the longest - or most interesting - routes you can compile into an extended trip that, for the most part, span multiple provinces: The Cape Namibia Route taunts drivers on the N7 with signs just a few kilometres outside of the city. But don’t let this early alert fool you into complacency - from the first markers outside of Cape Town, you still have all of 670 odd kilometres before you reach the border post at Vioolsdrif. If you’re continuing on to civilisation in Windhoek, you can double that distance.

The seven hour South African leg of the drive is best broken up into multiple parts - and fortunately the route is full of small town West Coast rewards, particularly if you’re willing to venture off the main drag.

Wupperthal, Elands Bay, and Lamberts Bay are all popular stops close to the N7 - but further up the coast are more isolated stops like Bitterfontein, Garies, Hondeklip Bay, and Kammieskroon.

Even if remote west coast towns and the quirks that they offer aren’t your thing, the dirt roads that lead you to them offer spectacular scenery - especially during the wildflower season in August and September.

The Garden Route is perhaps South Africa’s best marketed - and most driven - scenic routes. Although travellers who don’t pay attention can whip along it in a matter of impersonal N2 hours, those who slow it down tend to reap the rewards and sing its praises.

For many the Garden Route covers the stretch of the N2 between Cape Town and Plettenberg Bay, but officially it’s actually just the 300-odd kilometres between Witsand and Storms River. The scenery, topography, and vegetation have had most guide books describe it in a variety of superlatives - and parts of the route offer archetypal oceanside road trip appeal that has tourists, and most locals, agreeing.

The towns and attractions along the way are also noteworthy - they include such South African coastal heavyweights as Wilderness, Knysna, Plettenberg Bay, and - at its end - the Tsitsikamma forest. Although the terms "road trip" and "Wild Coast" in the same sentence may attract comments about potholes and inattentive ambling cows, this stretch of coastline, serviced by the N2 but best explored closer to the coastline, is unsurpassed for remote, largely unspoiled and fertile scenic beauty in South Africa.

Most of the magic of a Wild Coast road trip is reserved for the rutted dirt roads that venture east towards the desolate coastline. Small resort towns and coastal villages have been drawing tourists for years, but a slew of niche backpackers and ecolodges, often with little else in the way of infrastructure nearby, offer maximum tranquility and reward for the sometimes taxing driving conditions.

Total distance: 350 km (depending on exact route and detours) 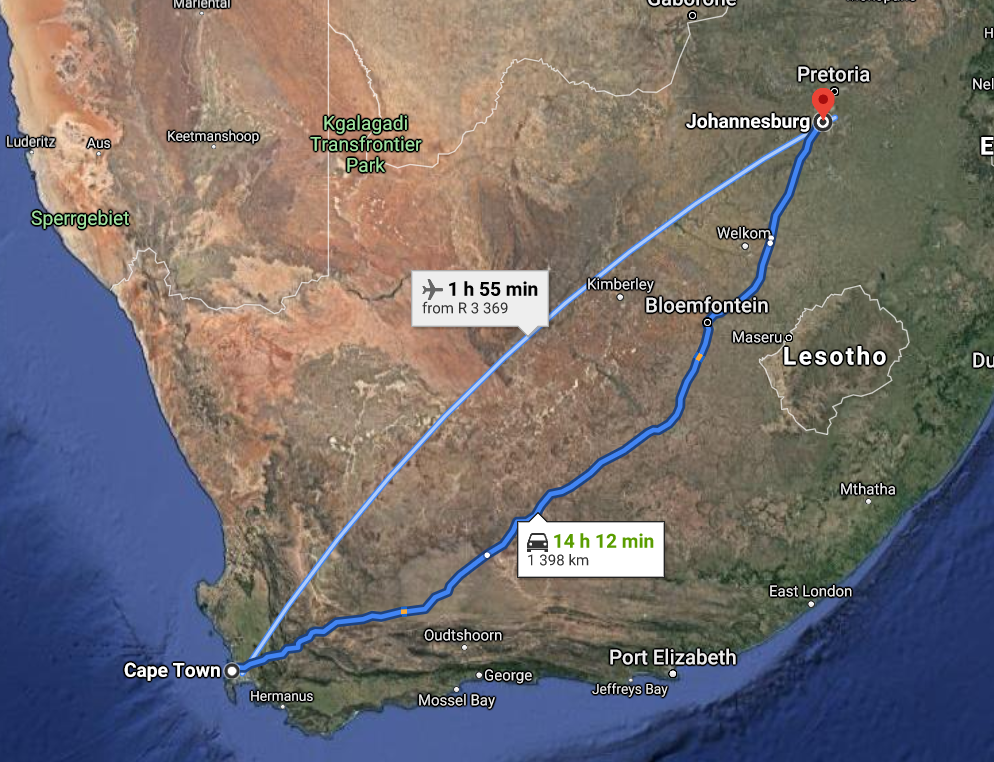 On the face of it, hitting the long, lonely, and often busy N1 that connects two of South Africa’s biggest cities is not exactly the stuff of road trip dreams - unless you're into your roadside burgers and overtaking long trucks. Although most drive the route purely as a chore in order to reach the coast for an annual escape from up north, in the right frame of mind this road trip presents a variety of other reasons that make it worthy of inclusion.

Scenery is not one of them, at least not compared to other better-marketed routes in South Africa - but the changing landscapes, from wheat fields to the sparse Karoo, do hold some appeal. The strictly N1-only route between Joburg and Cape Town will also take you through four provinces, dozens of small towns, and some fairly stark contrasts, which serve as a fairly enticing cross-section of the country. And there are also several options to help mix it up on the return journey - with possible detours via Kimberly, Carnarvon, and other small Karoo towns. This route may not actually make it into many guide books, but horizontally dissecting the country is - on paper at least - an enticing prospect for any accomplished road tripper looking for a new one to tick off.

A road trip from Springbok to Durban would take you from extremes in rainfall, vegetation, language and culture. There are several variations, but the most direct route cuts through some intriguing towns and cities - and the very heart of Lesotho, if you choose to do so.

Circumventing Lesotho makes this a near-16 hour journey, but considering you can stop off in such attractive destinations as Pofadder, Griekwastad, Kimberley, Bloemfontein, Howick and Pietermaritzburg, it’s one easily broken up over a few days. The Waterberg serves as a good escape from the city for nearby Jobugers - and the 350 km Waterberg Meander is one of the better ways to explore it.

This neatly packaged road trip follows a similar vein to others constructed by tourism boards and like-minded regional businesses looking to attract guests to an area. But when you consider that it exposes you to mountains, forests, rivers and plains, and connects several cultural attractions and lodges, all within two hours of the busy city, it’s a snappy road trip well worth considering.

Route 62 is another well-constructed South African road trip that manages to pull together enough interesting attractions and beautiful Western and Eastern Cape scenery for it not to be discounted as a clever marketing tool.

It’s a road trip best reserved for lovers of wine and remote farmsteads, given that it cuts through several over its hundreds of inland kilometres. It optimistically also calls itself the longest wine route in the world - because it starts outside Cape Town, and ends close to a wine farm somewhere in Port Elizabeth - but there’s no shortage of alcohol-related stops to be made on the way.

Route 62 is longer than many people realise, and it serves up coastal views, towering mountains, quaint villages, and perhaps the most iconic - if not overdone - South African road trip photo opportunity at Ronnies Sex Shop.

Combine it with the nearby Garden Route for the best of both road tripping worlds in the southern reaches of South Africa. In any other country, the Panorama Route may well be a top-tier road trip attraction - but in one as rich in road trip scenery as South Africa, it’s often overlooked.

The jewel in the crown of this route is the remarkable Blyde River Canyon - a worthy attraction in its own right. But driving the Panorama Route will, as its name suggests, expose you to several other notable views along some of the highest tarred roads in the country.

It’s most often recommended for those passionate about mountains and valleys, but the history hidden in the towns of Graskop and Pilgrim’s Rest, and the proximity to the Kruger National Park, mean has widespread appeal for all fans of the open road.

Related Links
Why SA rush-hour traffic may never return to pre-pandemic levels
A visa company now has ‘doorstep’ coronavirus testing – at R1,040 – for travel clearance
The coolest Airbnbs in South Africa - from house boats and treehouses to vast mansions
Next on Business Insider
Heathrow cancelled flights because it expects more passengers to turn up than it can safely handle