The ARB found that the Diesel ad was not in contravention of advertising rules. (Source: Advertising Regulatory Board)

2021 saw many complaints before South Africa's advertising watchdog the Advertising Regulatory Board (ARB), some of which it accepted as valid, and others that seemed to point more to peculiar sensitivities among some conservative South Africans than a breach of advertising rules.

From an insurer linking HIV to death while trying to sell insurance, to a radio advert promoting condom use that one listener said was inappropriate for kids, the ARB has had to play arbiter.

Here are some of the stand-out advertising complaints the ARB had to consider in 2021. One listener wrote to the ARB to complain about a Durex advert that was aired on a Sesotho radio station, LesediFM, which links its condoms to better sex. The listener considered the ad inappropriate, especially for young children.

In the commercial by the makers of Durex, Reckitt Benckiser Pharmaceuticals, a male voice, speaking Sesotho, is heard saying, "Aah, the Spaza. It is quick, very convenient, and in your area. It is a place where you get all what you need. Local things. Like fat cakes... and Durex."

The male voice ends the advert with the payoff line "Better quality for sex that is a little bit better."

The ARB ruled that the ad was is not disturbing, not even when kids are listening.

The ARB found that the Diesel ad was not in contravention with adveritising rules. (Source: Advertising Regulatory Board)

Billboards in Johannesburg with premium clothing maker Diesel's ads became a point of contention when a consumer complained about them being too graphic.

In the ads marketing Diesel clothing, various couples are seen to be kissing, which some saw as sexually charged and not appropriate for children.

The ads formed part of Diesel’s "When Together" campaign of "eight real-life couples physically and emotionally reconnecting in bliss following periods of absence from each other’s lives". In its argument, Diesel said it sought to emphasise the importance of human connection after being deprived of it.

While the ARB found that the ads showed the couples in positions of that were suggestive of sexual activity beyond kissing, to be seductive and provocative, it said the ad could not be labelled as pornographic, and therefore was not in contravention of advertising ethics. When an advert by AllLife, which directly linked HIV to death while attempting to sell life insurance aired, it made some viewers uncomfortable.

The ARB barred the ad, saying it could send the wrong message and effectively portrays HIV as a death sentence.

In the advert, a woman appeared asking the question, "Are you living with HIV? Are you worried about what will happen to your loved ones when you die?".

But, the regulator said, by implication and ambiguity, the ad suggested that one has more reason to worry about death than a person not living with HIV, stating that that doesn't ring true for those on adequate treatment. 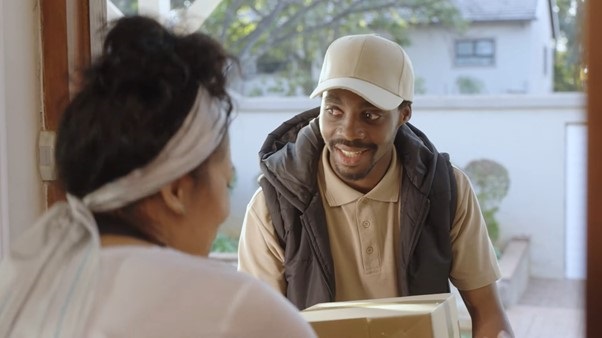 A still of the Pudo advert where the words "koek" and "kak" are made.

New locker service, Pudo, which is owned by Courier Guy, landed itself in hot water more than once this year with a series of edgy adverts. Some complaints the ARB dismissed, but some led to the regulator to impose strict sanctions.

Its recent series of five adverts that make use of the words "kak" and "koek" were blasted for using foul language, and references to sex, during family viewing time.

Courier Guy denied any innuendo or vulgarity in its response, saying such interpretation was based on the perspective of complainants and not its intended messaging, but the ARB disagreed, stating that the innuendoes are palpable and undeniable.

It then ordered the company to only air its Pudo adverts during watershed periods, or between 21:00 and 05:00, when they are unlikely to reach children.

In another Pudo advert, featuring a woman using the word "jir", a viewer lamented the use of the word, saying that the Lord's name was being taken in vain.

But the ARB ruled that the word used in the ad was not an Afrikaans word that can refer to Jesus, "Jirre", but "jir", which is akin to other common expressions such as "Jislaaik", commonly used to denote irritation, annoyance, or exasperation.

It said the ad had nothing to do with religion and said even if "Jirre" was used, South Africa is a secular country and it would be difficult for advertisers to accommodate all religions.

A creepy alien in a Chicken Licken advert? But the ARB dismissed the complaints and said the character was not scary. Instead, it said the alien was cute rather than frightening "and clearly friendly."