Everything we know about Thailand's eccentric King Rama X, who married his bodyguard, gave his dog a 4-day funeral, and is legally immune from bad press The Asahi Shimbun via Getty

Thailand's royal family, compared to the constantly spotlighted British monarchy, is extremely secretive. The country has strict laws that forbid citizens and the Thai press from insulting and reporting on embarrassing details about the family.

King Maha Vajiralongkorn, officially known as King Rama X, was crowned in May 2019, almost three years after the death of the previous king, his father Bhumibol Adulyadej.

Thanks to restrictions to the Thai press, relatively little is known about Maha Vajiralongkorn.

What we do know, however, is that he was educated in Britain and Australia, is an enthusiastic cyclist and pilot, and has been married four times. On Monday, the palace also announced that his royal consort - and long-term girlfriend - had been plotting against the queen.

Scroll down to find out more about Thailand's secretive, bicycle-loving king.

Maha Vajiralongkorn Bodindradebayavarangkun was born in 1952 as the second child and only son of then-King Bhumibol and his wife, Queen Sirikit.

Though he wasn't immediately named Crown Prince, he was widely expected to be his father's successor. His birth was seen as a great relief to the Thai royal family at the time, which had been anxiously awaiting a son.

Vajiralongkorn stands for "adorned with jewels or thunderbolts" in Thai.

Though he was officially named Crown Prince in 1972, aged 15, he actually spent much of his childhood outside Thailand. He was sent to school in England from ages 13 to 17, before enrolling at military college in Australia until 1976. He attended prep school at 13 before moving on to the prestigious Millfield boarding school, where he finished at 17.

He then attended Royal Military College, Duntroon, in Canberra, Australia. He graduated in 1976.

He struggled to keep up at school in England and Australia, blaming his upbringing in the Thai palace, the BBC reported.

After graduation he joined the Thai army, where he served as an officer and worked for most of his life. He is a qualified pilot on both civilian and military aircraft, and flies his own Boeing 737 when he travels overseas, the BBC reported.

He has received military training in Thailand, the UK, US and Australia, the BBC said.

After the death of his father King Bhumibol in October 2016, Maha Vajiralongkorn ascended the throne as His Majesty King Rama X — meaning he is the tenth monarch of the royal house of Chakri.

However, Maha Vajiralongkorn's coronation only took place three years later because he wanted the country to mourn his father first.

Maha Vajiralongkorn "deemed it appropriate to allow a period of time for the people to pay their respects to the late King," Thailand's National Legislative Assembly said in an October 2016 announcement.

The long-awaited coronation, which took place in May 2019, was a spectacular event. Some 1,300 people and elephants paraded near Thailand's Grand Palace for six-and-a-half hours, according to the South China Morning Post. 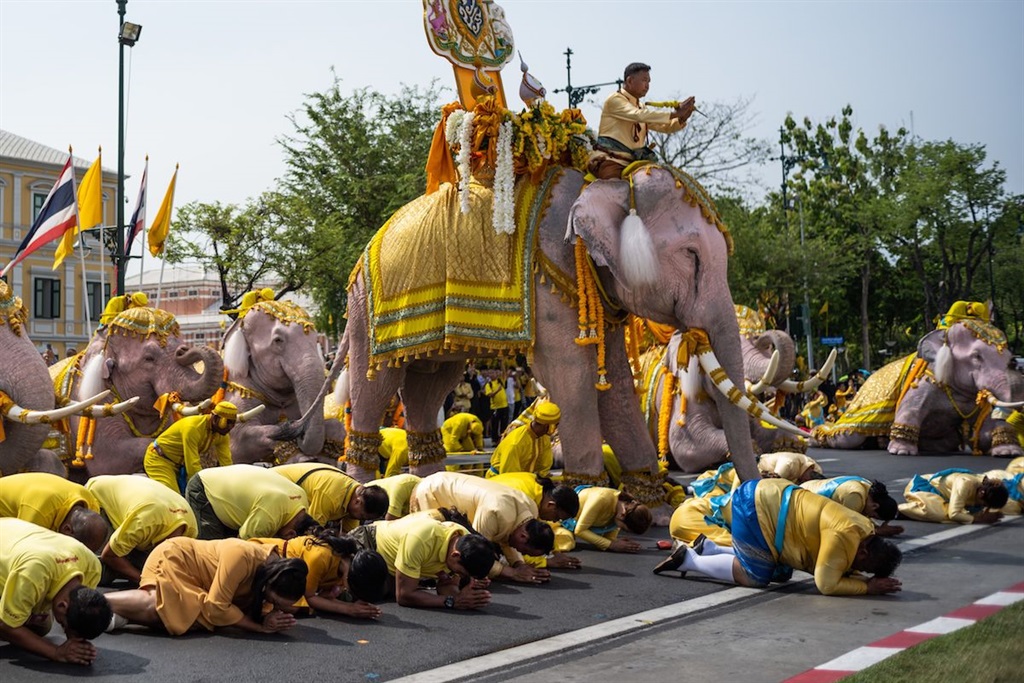 Three days before the coronation, Maha Vajiralongkorn married his longtime partner and personal bodyguard in a surprise ceremony.

The wedding was a surprise because the palace had never acknowledged the king's romantic relationship with General Suthida Vajiralongkorn before.

Footage of the wedding showed Suthida kneeling and bowing to the king before sitting beside him to sign marriage documents inside the ornate Ampornsathan Throne Hall in Bangkok.

Part of the ceremony also involved the king pouring sacred water on Suthida's head, according to the BBC.

This is his fourth marriage.

The king's marriage to Suthida cemented her position as Queen. She joined him on the palace balcony during his ascension festivities. In July, the king also bestowed the title of Royal Noble Consort to Sineenat Wongvajirapakdi, a former army nurse believed to be another long-time girlfriend.

Footage from the ceremony also showed the king splashing water on Wongvajirapakdi's face at the ceremony.

She is the first person to be formally granted the role since 1921.

Queen Suthida sat beside her husband during the occasion.

In August, the Thai royal household gave a glimpse of what life is like there by releasing rare photos of Wongvajirapakdi wearing a crop top and piloting a plane.

Wongvajirapakdi wanted to be queen herself, and tried to stop the king from marrying Suthida, a palace statement said.

The king tried to ease tensions between the two women by giving Wongvajirapakdi the title of royal consort - an approach that appeared not to have worked.

Despite her new rank, Wongvajirapakdi "did everything to make herself equal to Queen Suthida" and disobeyed the king and queen, Channel News Asia reported, paraphrasing the palace.

Wongvajirapakdi's actions became public in October when the king announced that he had stripped her of all royal and military titles for disloyalty.

On top of this the king has a reputation for womanising, having fathered seven children by three women. He has had numerous acrimonious divorces in the past.

His mother, Queen Sirikit, reportedly once described her son as "a little bit of a Don Juan" in the early 1980s.

She also suggested that her son preferred spending his weekends in the company of beautiful women over carrying out his formal royal duties, the BBC reported.

Unproven rumours have also circulated that he was previously involved in illicit activities, though no details or specifics have ever been released.

According to The Guardian, Maha Vajiralongkorn directly addressed the rumours in a meeting with journalists in 1992, saying: "Do I look like a mafia boss type? I tell you, if I were, I would have been a millionaire by now."

Maha Vajiralongkorn is likely shielded from those rumours in Thailand, which has strict lèse-majesté laws, which forbid people to insult, defame, or threaten any member of the royal family.

The Asahi Shimbun via Getty

He even jailed the parents of his third wife, a lady-in-waiting named Srirasmi, under those laws by accusing them of abusing their connections with him, the BBC and The Sun reported.

Despite his important role in Thailand, he doesn't seem to spend a lot of time in the country. He reportedly spends most of his time in Germany, and according to Bild newspaper has a home in Bavaria.

He has a home on Lake Starnberg, southern Germany, Bild reported.

He's a keen cyclist, and has regularly led mass biking events in Bangkok in the past. Here he is at the "Bike Un Ai Rak" or "Bike Love and Warmth" event in December 2018.

His daughter Princess Sirivannavari Nariratana has also taken part in these events in the past.

He's even been seen cycling in a crop top around Switzerland ... And in even fewer clothes in Germany. The eccentric king is also known for his love for dogs. When his pet poodle Foo Foo died in 2016, he gave him a four-day-long Buddhist funeral ceremony.

He used to dress Foo Foo up as an air chief marshall and take him to formal events, The Guardian reported.

Source: The Guardian, The Sun