Tesla's Model 3 has a lot of strong qualities.
We recently tested the Tesla Model 3, for a brief period — about three hours. Myself and Business Insider's senior transportation reporter Ben Zhang came way impressed. But we were impressed with the Model 3 as a car, not just a piece of advanced technology with four wheels.

We think this is important because the Tesla Model 3 has to do more than satisfy early adopting techies who don't care about ride quality or performance. Ben and I test dozens of vehicles every year, and often they're high-end, big-ticket luxury cars and SUVs that have been fastidiously assembled and are designed to thrill their drivers. It's a very good thing that the Model 3 struck us as being worthy to play in that league.

Consumer Reports also recently published its initial thoughts on the Model 3, and they were much like ours, although we differed on a few points. CR's positive verdict is also important. The outfit is rigorous and objective: it buys the vehicles it tests, to avoid any implication that its opinions have been manipulated by manufacturers. CR's testing is also long-term, racking up thousands of miles, and the publication maintains a high-tech evaluation facility in Connecticut, where it can truly put a vehicle through its paces.

A nice set of wheels The bottom line for both BI and CR, based on quickly gathered impressions, is that the Model 3 in fully decked-out trim is a darn nice set of wheels.

Tesla has struggled to produce the vehicle at the scale it expected, something the carmaker has blamed on battery manufacturing holdups at its plant in Nevada rather than assembly line snafus at its factory in California. We were cautious when evaluated the Model 3 because it was being used for press purposes, and automakers understandably set these vehicles up to be as compelling as possible.

But CR's Model 3, although expensive, is what a customer would get. That our thoughts on the car aligned is an indication that much of the internet scuttlebutt about Model 3 build quality can be chalked up to early production and doesn't necessarily bode poorly for the hundreds of thousands of prospective owners who have put down $1,000 (R11800 deposits on cars. Besides, Tesla has described the Model 3 as a ten-year program, so there will plenty of time to refine how the vehicle is bolted together.

CR was made more uncomfortable that we were by two aspects of the Model 3: ride quality and the large central touchscreen that controls nearly all vehicle functions. We were each wowed by the Model 3's snappy, all-electric performance and its solid handling. And we both found Autopilot, Tesla's semi-driving feature, to be an effective form of advanced cruise control, but nothing like full autonomy. 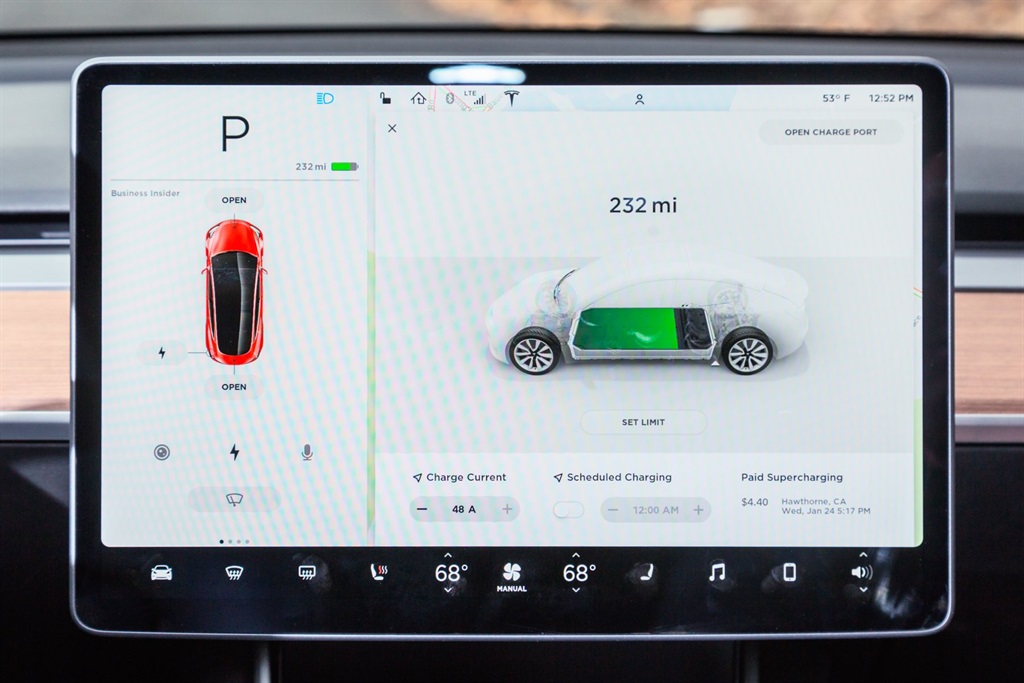 Tesla's Model 3 has a touchscreen that controls everything. This is a point of contention.
Hollis Johnson/Business Insider

One the Model 3's ride, after praising its taut suspension, CR said that "[r]ide quality is a different matter. The car is overly stiff, struggling to absorb bumps with the dignity expected from a luxury car. There’s also considerable wind noise at highway speeds."

We found the opposite, as we drove the Model 3 over Manhattan potholes and over both New Jersey highways and back roads. Our verdict was that the Model 3 soaks up the bumps far better than we thought a vehicle of its size would, and we attributed some of that to the car's greater use of steel (versus aluminum) in its construction, as well as its low center of gravity thanks to a large battery under the floorboards.

We also didn't struggle to hold a conversation when humming along at highway speeds, and there were four of us in the Model 3. Wind noise seemed negligible. Okay, the Model 3 isn't Mercedes S-Class library quiet. But we didn't expect it to be.

CR's reviewers thought that the Model 3 could use a head-up display, to put the important operational information (like speed) in front of the drivers, rather than off to the side on the left edge of the central touchscreen. We had similar thoughts, but after just a few minutes of driving, we adjusted to the display configuration. A head-up system would be fine, but we don't think it's imperative.

Both BI and CR felt that Tesla had overdone it by cramming so many functions into the infotainment interface. We expect that the company might make some accommodations in the future, but the river has also been crossed, and we don't think that a bunch of buttons and knobs will appear on Model 3 2.0. All in all, Tesla did a great job with the Model 3.
Hollis Johnson/Business Insider

CR has a reputation for being conservative and a bit stodgy about cars, but Ben and I have a lot of respect for abilities and experience of its autos team, as well as the way they scrupulously evaluate vehicles. We lack their considerable facilities, but we have found over the years that we tend to focus on many of the same things. Enthusiast magazines are often all about performance, and we like that, but we also strive to assess vehicles with a broad range of consumers in mind and try to think about how people will use their cars in real life.

Frankly, both BI and CR have concluded, at least initially, that the Model 3 is a fine automobile and proof that Tesla can build a car that, if the company can get the cheaper versions right, has a shot a moving the mass-market needle. CR and BI will also be reviewing the Model 3 more extensively this year, so we're not ready to hand out an A+ quite yet.

But for now, the Model 3 looks like a big win for Tesla, putting considerable pressure on the carmaker to get its production problems sorted out and put the car on the road!