Tesla has a history of beating the odds.

CEO Elon Musk has said he believed the company had around a 10% chance of success when it was founded in 2003. Since then, the company has won awards for its vehicles, built an enthusiastic fanbase, and watched its market capitalization approach and temporarily top those of General Motors, Ford, and Fiat-Chrysler.

Part of the company's success can be attributed to Musk's rare gift for storytelling. Since taking over as the company's chief executive in 2008, he's outlined a vision for the company that extends beyond selling cars to transforming global energy grids. Investors have bought that story, which is why the company has been able to raise money without much difficulty despite posting consistent deficits.

But that story has taken a hit in recent months as the company has faced concerns over its finances, ability to build cars at scale, and public comments attributed to Musk and Tesla. Now, the company is at an inflection point. Elon Musk says the company will be profitable by the end of the third quarter and won't have to raise money for the rest of the year. Some analysts and investors disagree with him. Whether Musk lives up to his assertion could determine whether 2018 sets the stage for another improbable triumph or raise serious questions about the company's future.

Here are the moments that have led to Tesla's latest moment of reckoning:

In February, Tesla's Amazon Web Services account was hacked to mine cryptocurrency. The hack, which was brought to Tesla's attention by the cybersecurity startup RedLock, also reportedly exposed some of Tesla's proprietary data related to mapping, telemetry, and vehicle servicing.

According to Fortune, Tesla paid RedLock over $3,000 (R36,200) as part of its bug bounty program, which rewards people who find vulnerabilities in the company's products or services that could be exploited by hackers.

"The impact seems to be limited to internally-used engineering test cars only, and our initial investigation found no indication that customer privacy or vehicle safety or security was compromised in any way," a Tesla spokesperson told Business Insider in an email. In March, Tesla issued the largest recall in its history. The recall involved power-steering systems in 123,000 Model S sedans. Tesla said five bolts responsible for holding the power-steering motor in place could corrode, break, or come loose, which could result in the loss of power steering. But the company also said the problem was rare and most likely to happen in colder areas that use a specific kind of salt to lessen the amount of ice and snow on the road. According to Tesla, the problem was only relevant to Model S vehicles built before April 2016 and had affected just 0.02% of Model S vehicles at the time the recall was announced. In March, a Model X crashed into a highway barrier in Mountain View, California. The driver, Walter Huang, died after being taken to the hospital.

Autopilot, Tesla's semi-autonomous system, was engaged during the accident, and Huang's wife said he had complained about the system not working properly near the area where the crash occurred.

Tesla released a statement blaming Huang for the accident. The company said "the only way for this accident to have occurred is if Mr. Huang was not paying attention to the road, despite the car providing multiple warnings to do so."

While Tesla pointed to statistics that indicate fatal accidents are 3.7 times less likely to happen in Tesla vehicles that have Autopilot than in other vehicles, the crash highlights the difficulties automakers face as the industry slowly shifts toward autonomous vehicles.

A fight with the NTSB

Four days after the accident, the National Transportation Safety Board announced an investigation. Tesla helped the agency retrieve and interpret data from the vehicle's logs, but the company clashed with the agency over Tesla's decision to reveal information about the crash on its blog.

It can take 12-24 months for the NTSB to release a report about an investigation, and the agency doesn't like outside parties to release information that hasn't been approved by the agency.  As a result, Tesla is no longer a party to the agency's investigation, though it will continue to assist the agency. Each side disagreed over who ended Tesla's party status. The NTSB said it revoked it, while Tesla said it voluntarily chose to remove itself from the party agreement. 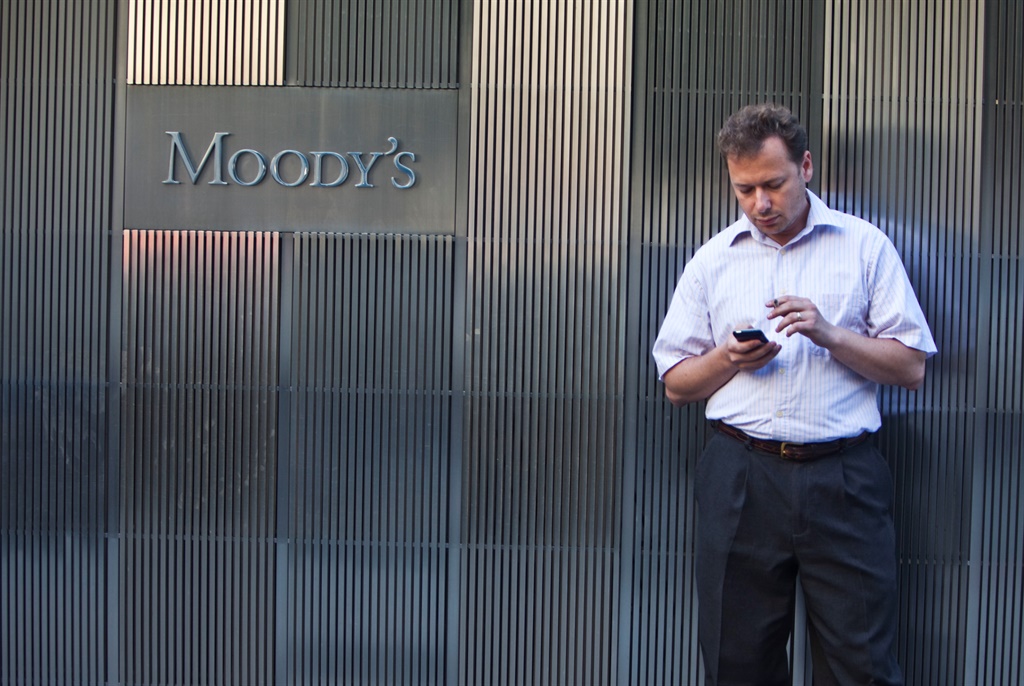 In March, the rating agency Moody's downgraded Tesla's credit rating from B2 to B3 because of concerns about the company's ability to hit its production targets for the Model 3. The move hurt Tesla's stock price and drew attention to the frequency with which the company has spent and raised money. It also reignited concerns over whether the company might eventually go bankrupt.  Musk would later say that Tesla would be profitable by the end of the third quarter and would not have to raise money this year. Musk poked fun at questions about Tesla's financial health in an April Fools' Day Twitter thread written in the style of a newspaper story.

"Tesla Goes Bankrupt Palo Alto, California, April 1, 2018 -- Despite intense efforts to raise money, including a last-ditch mass sale of Easter Eggs, we are sad to report that Tesla has gone completely and totally bankrupt. So bankrupt, you can't believe it," Musk wrote.

Read Also: Elon Musk doubles down on his controversial April Fools' joke with an Instagram photo of a Tesla-branded tequila bottle

Musk ended the thread with a photo himself pretending to be passed out against a Tesla vehicle covered by a cardboard sign reading "Bankwupt!"

"Elon was found passed out against a Tesla Model 3, surrounded by 'Teslaquilla' bottles, the tracks of dried tears still visible on his cheeks. This is not a forward-looking statement, because, obviously, what's the point? Happy New Month!" he wrote.

Musk's response didn't please investors and analysts, who were concerned about Musk's attitude toward criticism directed at Tesla

Elon was found passed out against a Tesla Model 3, surrounded by "Teslaquilla" bottles, the tracks of dried tears still visible on his cheeks.

This is not a forward-looking statement, because, obviously, what's the point? In early April, Tesla said it made 9,766 Model 3 vehicles in the first quarter, which marked a significant improvement over the fourth quarter of 2017. But the company didn't hit its goal of producing 2,500 Model 3s per week by the end of the first quarter, reaching only 2,020 in its final week.

Musk also said the company expects to produce 5,000 Model 3s by the end of the second quarter, a rate of production Musk originally hoped to achieve by the end of 2017.

Musk fires back at reporter who hints at management shakeup

In early April, The Information released a report that claimed there was turmoil at the upper levels of Tesla's management team. The report said Musk had pushed aside engineering vice-president Doug Fields to assume control of the Model 3 production process.

Musk criticized the story on Twitter in a response to its author, Amir Efrati.

"Can't believe you're even writing about this," Musk wrote. "My job as CEO is to focus on what's most critical, which is currently Model 3 production. Doug, who I regard as one of the world's most talented engineering execs, is focused on vehicle engineering."

The post set off a heated exchange between the two.

"How about we set up an interview and you can tell me, among other things, what you think is worth writing about," Efrati replied. Last week, Musk gave CBS This Morning host Gayle King a tour of the Fremont, California, factory where Tesla makes its cars. During an interview, Musk agreed when King mentioned the criticism that there are too many robots involved in the Model 3's production.

He also agreed when King suggested that the factory could use more human workers and that automation had slowed the Model 3 production process and referred to a "crazy, complex network of conveyor belts" Tesla had used until it became clear it wasn't working.

Musk later took responsibility for the amount of automation at the factory on Twitter.

"Yes, excessive automation at Tesla was a mistake. To be precise, my mistake. Humans are underrated," he wrote in response to a Wall Street Journal reporter. On Monday, the Center for Investigative Reporting published an investigative report saying Tesla had misreported workplace injuries and failed to take some safety measures at its factory in Fremont, California.

Specifically, the report says Tesla failed to report injuries employees incurred while at work or mislabeled them, avoided some safety markings for aesthetic reasons, and insufficiently trained some employees for dangerous work. It added that the California occupational-safety agency had logged over 40 violations from Tesla since 2013. In a blog post, Tesla denied the allegations in the report, calling it "a completely false picture of Tesla and what it is actually like to work here" and "an ideologically motivated attack by an extremist organization working directly with union supporters to create a calculated disinformation campaign against Tesla." Tesla has been unable to hit its production targets for the Model 3 so far.
Tesla

On Wednesday, California's Division of Occupational Safety and Health confirmed it is investigating workplace conditions for Tesla employees.

An agency representative said the agency didn't discuss open investigations but that they often involve reviews of electronic records that companies submit to report workplace injuries and illnesses.

"Cal-OSHA is required to investigate any claims that are made, regardless of whether they have merit or are baseless (as we believe these are), and we always provide our full cooperation," a Tesla spokesperson said in an emailed statement. "Last year, a Cal-OSHA investigation into our injury reporting and record-keeping was closed without any violations found and without any further action taken."

The bull market in game is over, but these bucks are keeping their prices

7 tips on how to be productive from Elon Musk