Takealot’s #Backthebucks – a promotion that offered full refund for Samsung TVs if the Springboks won the World Cup – almost backfired after the retailer told a customer he would not be getting his money back.

Stewart Nemaitoni was left flabbergasted after Takealot said he had bought his TV on the wrong day, and so was not eligible.

When the Boks crushed England, Nemaitoni had assumed he was one of the 346 shoppers Takealot said would get back their money, in a promotion worth almost R4 million.

UPDATE: Takealot will refund R4 million to 346 customers after the Springboks won the Rugby World Cup

When he failed to receive an email notification that he was a winner by the 4 November deadline, he started to get worried, and reached out to Takealot.

“Firstly they told me the campaign ran from 02 October to 25 October, which was a lie, I sent them a screenshot as well as the tweet advertising that the initial campaign actually ran from September,” Nemaitoni said. “They then changed the story and said they were wrong, the initial campaign ended 20 September, not 25 October anymore, and that they received my order on the 21st of September.” Part of the initial confusion seemed to be because of Takealot re-opening the promotion after the Springboks beat Japan in the quarter-finals of the tournament.

Despite the date issue, Nemaitoni received a TV with an invoice clearly marking it as part of the promotion, listed as "#backthebucks Samsumg 49 Inch Curved Smart UHD R7,499"

Yet Takealot said he had not bought it at the right time. Nemaitoni took to social media, and the internet took his side.

“Against all the odds, the Boks did win and I’ve since been trying to contact Takealot to get my refund, they kept telling me stories,” wrote Nemaitoni in a Hello Peter complaint, as he complained on social media about the injustice of it all.

So it turns out Takealot’s #backthebucks was a SCAM! I’ve been trying to reach out to them to initiate my refund they keep changing theyre story see for yourself @News24 @BDliveSA @BusinessTechSA @TAKEALOT @SamsungSA https://t.co/TpAKnG4rO1 pic.twitter.com/5brRUCdrSn 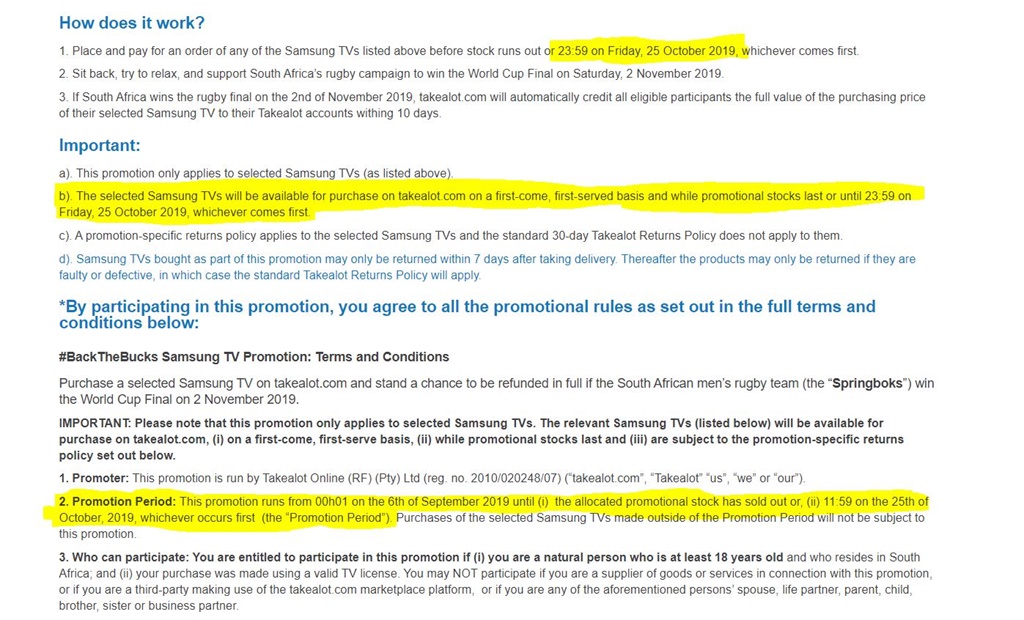 Takealot terms and conditions of the competition. Photo Jay Caboz.

The most glaring was the lack of any closed-period dates in the promotion, during which TV buyers would not be eligible for refunds.

The response from the twitter account is different to whats on the website https://t.co/BST2xqWhvS.There they say "This promotion runs from 00h01 on the 6th of September 2019 until (i) the allocated promotional stock has sold out"

An updated version of the rules of the promotion, which included its re-opening when the Springboks seemed to have a shot at the trophy, states: “The promotion runs from 00h01 on the 6th of September 2019 until (i) the allocated promotional stock has sold out or, (ii) 11:59 on the 25th of October 2019, whichever occurs first (the “Promotion Period”).”

Another Twitter user pointed out that while date of purchase fell outside of the initial promotion window, the TV should have been taken off the retailer’s website.

They should have removed that from the site then. False advertising. They have to honour the promotion or full refund and take the dam TV back.

Business Insider tried to access sold out TVs and found the pages would not load, as might be expected.

Closed Takealot deals should look like this when a promotion is sold out, or expires. Photo Jay Caboz.

By 9:30AM on Tuesday, Takealot told Business Insider South Africa that it had a team meeting about the issue.

It seemed that things were not as cut and dried as Takelot's customer representatives had held at first, after the internet got involved.

The retailer apologised, and said it hoped to still be friends.

@Stewy_Gryff we've tried to call you and left a message. Your order qualifies for the #backthebucks promo and your refund will be processed as promised. So sorry for providing the incorrect information before, this was an oversight on our side. Can we still be friends? ??

A spokesperson contacted us a half hour later, to confirm that they had double-checked Nemaitoni’s order, and would be getting a full refund after all.

Takealot said his name had been on the list of promotion participants the whole time, and he was part of the original group of 346 people it had committed to paying out.

“We have been in touch with him directly to apologise for the experience,” said the spokespersons.

So how did Nemaitoni feel about his friendship status after it was all settled?

“Well, potentially, they have really good prices and specials and until today I hadn’t had a single bad experience. They’ve apologized and that’s good enough for me. Yes still friends,” Nemaitoni told Busienss Insider.