One of South Africa’s oldest cricket grounds, which hosted its first international test match in 1889, is getting an R800 million makeover. Set against the backdrop of Table Mountain, Newlands played host to five One Day Internationals in the 2003 Cricket World Cup and is regarded as one of the most iconic grounds in the world.

Newlands Cricket Ground (NGC) has undergone dozens of changes over the last century, with major renovations in the 1990s, expanding the pavilion to seat 25,000 fans and include corporate boxes. Initial plans to extend developments into the surrounding precinct were delayed by the City of Cape Town’s stringent zoning regulations. The NGC’s full-scale overhaul, initiated by the Western Province Cricket Association (WPCA), in the search for sustainable revenue models, was expected to be completed by 2017. A mix-use development allows the WPCA, which has recently been hit by a wave of resignations amid financial turmoil, the opportunity to diversify its revenue.

By expanding the precinct to include office spaces, shops, and restaurants adjacent to the grounds, the WPCA aims to rely less on cricket matches as the primary source of income. 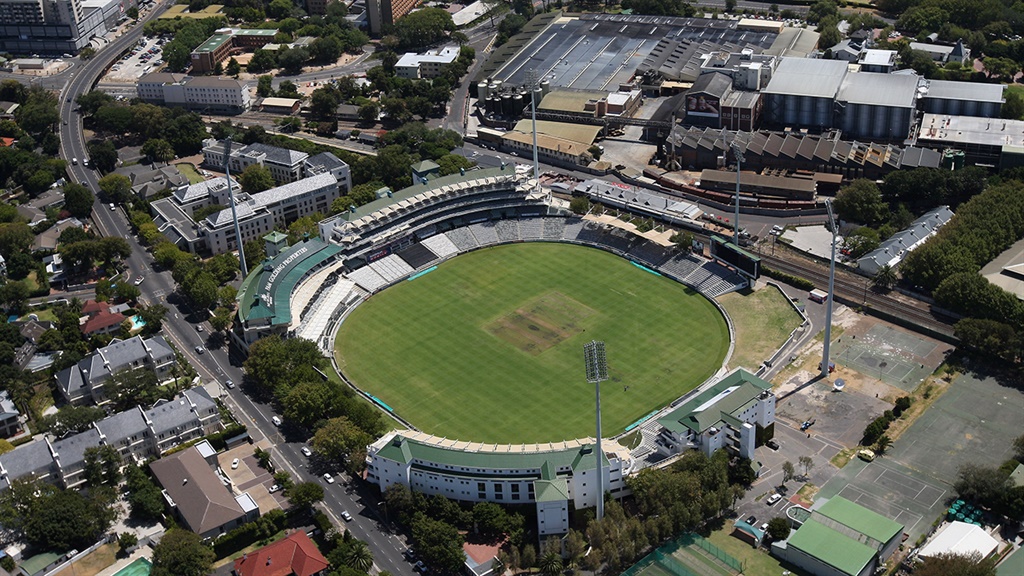 “For many years it became apparent that surviving on the revenue generated by match days was no longer an option and we needed to find a solution that would make a positive impact,” explains Tennyson Botes, WPCA Interim CEO. “The ground is currently only used an average of 35 days per year, but this development will see the NCG precinct being utilised all year round.”

Recent approval of the ground’s rezoning preceded a major name change. At the end of October 2020, a local spice and seasoning manufacturer was awarded naming rights, changing the ground’s commercial acknowledgement to Six Gun Grill Newlands.

“The City of Cape Town has previously approved the rezoning of Six Gun Grill Newlands to transform it into a sustainable mixed-use sport, commercial, education and leisure-orientated precinct,” says Botes. “In terms of these rights, the development will yield an estimated 25 000 square metres of commercially viable gross leasable area.”

The latest development emerges from a 2019 partnership between the WPCA and Sanlam Life Insurance Limited. The R800 million investment is split three-ways, with Sanlam holding a majority 51%, WPCA, 37%, and Cricket South Africa the remaining 12%. The first redevelopment phase is expected to be complete in July 2021 and the second phase in early 2022. Once construction has concluded, the NGC precinct will offer underground parking facilities for over 800 vehicles and an extended pedestrian walkway below the existing pavilions which extends for almost one kilometre. Commercial buildings will be accessed through the ‘heritage stairs’ and the piazza below feature cafes, restaurants and shops.

The construction of a pedestrian bridge, over the southern railway line, provides a vital connection to the bustling Claremont centre. While a new development caters to bankers, lawyers, professionals, and tech companies, Botes says that Varsity College and the Cape Peninsula University of Technology (CPUT) will be occupying roughly 50% of the NGC precinct.

“When the new NCG Precinct is complete, people will see how we have used the project to drive urban redevelopment in the southern suburbs of Cape Town. We are particularly proud of the transit-oriented considerations for which our close proximity to the Claremont railway line is crucial,” explains Botes in reference to the construction of a pedestrian bridge linking the precinct with Claremont via Main Road and Campground Road. “For us, it is ‘pedestrians first’ in our design approach.”

Related Links
Cape Town is getting apartments the size of 1.5 parking spaces – for R1.35 million each
Cape Town was just named best airport in Africa again – but it is still shy of Joburg’s record
The Cape Town Stadium has a serious issue with pigeon poop so they’re employing hawks to solve it
Next on Business Insider
Most graduates want to work for the government and state institutions. But for noble reasons.