Found on the picturesque farm Marlenique Estate, just outside of Franschhoek, the floating solar park can produce 60 kilowatts of energy. The fruit farm is run by one of the oldest family businesses in South Africa, that stretches back generations.

He says the farm cannot afford to rely on Eskom to supply power. So they invested in solar power to keep the lights on and run their operations: that’s everything from irrigation pumps to packaging fruit for exports. With the rising costs of farming, and the impact of the drought, Van der Merwe said building a floating solar park was a far better investment than investing in planting a new orchard.

“Our input costs and direct production cost escalates more than our sales (revenue) per year, therefore, to be sustainable we need to focus on keeping the running and direct cost as low as possible,” said Van der Merwe. The floating solar park was built by renewable energy company, New Southern Energy (NSE). The company has made a name for itself by building off-the-grid power stations for high-end luxury game farms across Africa and on top of shopping malls.

“Due to rising energy prices and a high energy demand from its cold storage, irrigation and venue facilities, a microgrid system provided the best long-term solution for the farm,” said David Masureik, NSE CEO.

The floating park acts as a buffer from the sun, reducing evaporation of the dam water. 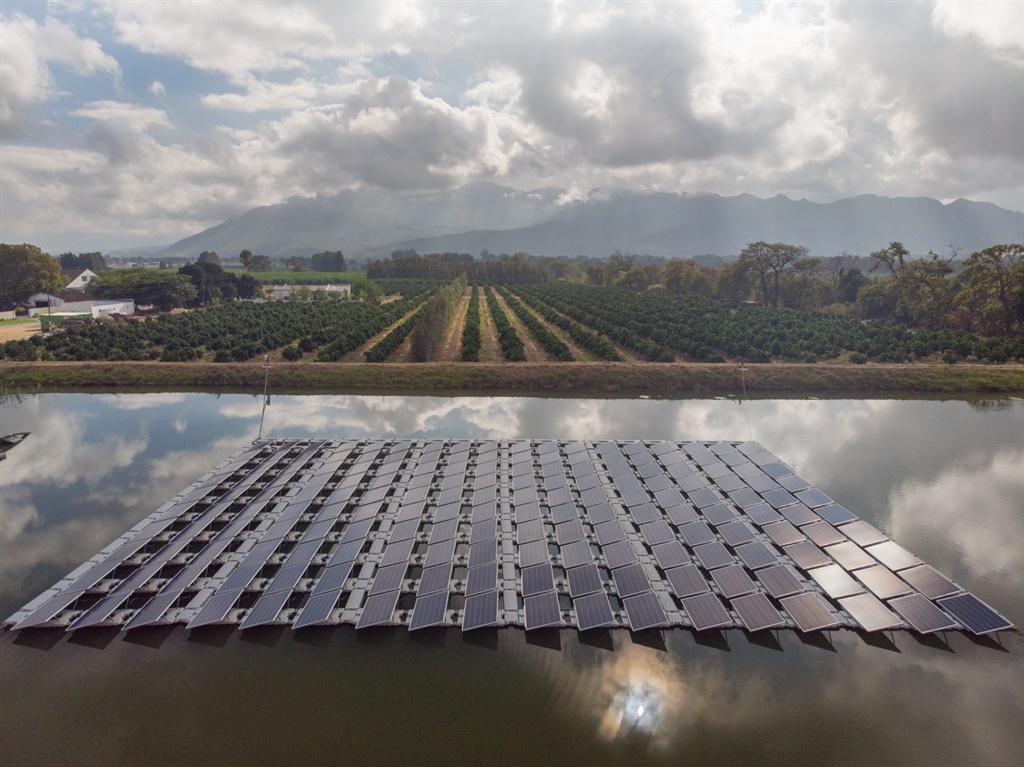 The floats, surprisingly, have become a haven for the animals in the dam, acting like an artificial reef of sorts. According to Masureik, fish now use them for cover.  Birds also are using it as a perching spot, which means they have to clean a lot bird poo off to keep the panels clean.

The team have found that having it on the water improves performance of the parts. The water acts like a cooling system, as opposed to panels on dry dusty land. Key to its success are the Hydrelio float mechanisms, sourced from Floating Solar who are the local distributor of its makers, Ciel et Terre. The floats are made from High-density polyethylene which is recyclable. They are highly resistant to UV exposure and corrosion with a 20+ year lifespan, and therefore don’t contaminate the water they are on.

Next door to the floating park is a much larger solar park. This was built on unused land that produces an additional 534 kilowatts at its peak. In total both solar parks will reduce their carbon footprint by more than 50 %, said Van der Merwe.

The park is built with a backup generator to run the internal grid in the event of power outages. The farmers are also looking to the future and have installed the infrastructure to allow for a battery system to be installed during the second phase of the project. This will take them completely off-grid. The project was financed through Nedbank Agriculture with the savings from the system allowing the farm to operate cash-flow positive from day one, while paying the asset off over 10 years. The structure of the payment is flexible and can be adjusted according to whether the farm has a productive or lean year.

Related Links
This London firm just crowdfunded the most ever for an African solar project
Bill Gates warns of the dangers of cow farts — and the world should take his words seriously
A Toto song will play ‘forever’ in the middle of the Namib desert – or at least until the sand...
Next on Business Insider
Government wants public to report road damage on new SANRAL Pothole app