Take a look: British scientists dressed up horses to find out why zebras have stripes A new study conducted by British scientists from the University of Bristol has found that stripes deter flies from landing on the zebras.

The study, published on the science platform Plos One, compared horses, zebras and horses dressed as zebras to solve a question that has occupied some scientists for 150 years. Scientists have previously argued that zebras have stripes for camouflage, to confuse predators, to keep them cool or as a form of signalling to its own kind.

Now researchers from the University of Bristol believe that it could help zebras to avoid blood-sucking bugs.

They examined the behaviour of tabanids (horse flies) in the vicinity of captive plains zebras and uniformly coloured domestic horses living on a horse farm in Somerset, United Kingdom.

Their observations found flies landed more on horses than on zebras, although the rates of flies circling around or briefly touching zebras and horses did not differ. 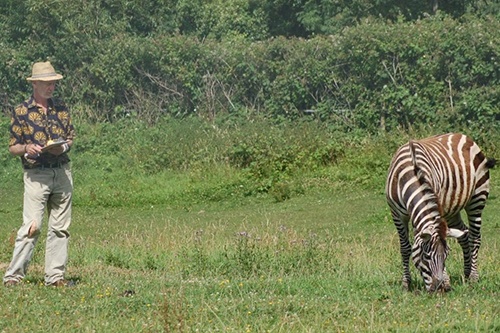 "Horse flies just seem to fly over zebra stripes or bump into them, but this didn’t happen with horses. Consequently, far fewer successful landings were experienced by zebras compared to horses," said Professor Tim Caro, Honorary Research Fellow from the University of Bristol's School of Biological Studies.

To eliminate the possibility that the zebras' behaviour or smell had anything to do with it, the scientists conducted a second experiment. They dressed up horses in black, white and striped clothing. The observations found those horses wearing striped patterns had far lower rates of flies touching and landing on coats than the same horses wearing plain black or plain white. Yet, there were no differences in attack rates on their naked heads.

The scientists recorded the activity of the flies on video and tracked their movements. Examples of horsefly flight trajectories around domestic horses (a-c) and captive plains zebra (d-f). Red line indicates the flight path and dark red dots show position at 0.1s intervals. Red arrows indicate direction of flight. Blue stars show points of contact or landings on the equid. Blue arrows show the end position of the approach and start position of the leave phases of flight. These markers are associated with manoeuvres that show changes in both direction and speed, and where this could not be reliably identified (e.g. approach in a) the data were omitted from analysis.
Plos One

Proportionately more flies touched rather than landed on zebra coats.

Taken together, these findings indicate that, up close, striped surfaces prevented flies from making a controlled landing.

"This reduced ability to land on the zebra’s coat may be due to stripes disrupting the visual system of the horse flies during their final moments of approach,"said Dr Martin How, Royal Society University Research Fellow in the School of Biological Sciences. "Stripes may dazzle flies in some way once they are close enough to see them with their low-resolution eyes."

The paper suggests that this could be the main reason for why zebras have evolved to have stripes over confusing predators, social interaction, or because it makes them cooler in the African heat.

The paper goes on to say the exact mechanism by which stripes prevent flies from obtaining a blood meal is less well understood.

The data is limited in that it was conducted in the United Kingdom rather than around biting flies from Africa. Other limitations included that the path of the flies could only be seen in two dimensions from video recordings and that the horse coats were made of different materials, the UK media outlet Guardian reported.

Related Links
Lower geyser temperatures save electricity and money – and could make you ill
Watch: These chicken eggs could one day fight cancer
These 23 animals that are in danger of disappearing forever
Next on Business Insider
TAKE A LOOK | SA's first biophilic building coated with plants breaks ground in Cape Town