A full-grown Tyrannosaurus rex stood about 12 to 13 feet high at the hip, and was about 40 to 43 feet long.
Illustration by Zhao Chuang/Courtesy of PNSO

Paleontologists have discovered the heaviest Tyrannosaurus rex ever seen in the fossil record. This massive predator, nicknamed Scotty, weighed almost 10 000 kilograms, according to a new study published in the journal The Anatomical Record.

That's about the weight of four pick-up trucks - heavier than any elephant or hippo alive today. More importantly, it's some 400 kilograms heavier than the previous T. rex record-holder, Sue, from Chicago's Field Museum.

The new study describes the discovery of this 13-mete-elong dinosaur. Scientists first unearthed it in the town of Eastend in Saskatchewan, Canada in 1991. But it took the paleontologists more than a decade to properly remove the skeleton from the surrounding sandstone - which had hardened like cement - plus additional time to assemble the bones.

Ultimately, they recovered 65% of Scotty's skeleton, including its skull, lower jaw bone, hips, and leg bones, as well as the vertebrae in its neck, back, and tail. (Sue still holds the crown for most complete skeleton, with 90% of the dino's bones intact and together.)

The final analysis shows that Scotty is the largest dinosaur skeleton ever found in Canada.

"This is the rex of rexes," Scott Persons, the lead author of the study and a paleontologist at the University of Alberta, said in a press release.

Persons and his co-authors wrote that this finding shows the T. rex is the largest known terrestrial carnivore ever to have lived.

Scotty lived longer than any other T. rex on record The towering and battle-scarred Scotty is the world's heaviest Tyrannosaurus rex and the largest dinosaur skeleton ever found in Canada.
Amanda Kelley

Not only does Scotty take the crown for heaviest T. rex, it also breaks records for being the longest-lived. Person's team estimated that Scotty was in its early 30s when it died.

Paleontologists can estimate the age that a dinosaur was when it died by analysing its fossilised bones, which have growth rings that correspond to its age, much like trees. Experts can count the number of rings to determine the creature's age, and also compare the spaces between rings to find out how fast the dinosaur was growing at different ages.

Studies of the rings so far suggest that in general, these predators didn't live very long. T. rexes grew from tiny hatchlings to 9-ton predators in about 18 to 20 years. Scientists believe few rexes lived past the age of 30. Sue, for instance, died at 28.

In that sense, the T. rex was like "the James Dean of the dinosaurs," according to Gregory Erickson, a co-author of the new study. The famous Hollywood actor - who is often connected to the quote "'live fast, die young, and leave a good-looking corpse" - died in a car crash at the age of 24.

T. rex hatchlings were covered in a layer of peach fuzz and looked a lot like fluffy turkeys or ducklings. Most baby rexes didn't survive past infancy: A baby T. rex had a more than 60% chance of succumbing to predators, disease, accidents, or starvation during its first year of life. We usually think of a T. rex as a monstrous killing machine, but the creatures' hatchlings were relatively defenseless.
R. Peterson / © AMNH

Once T. rex made it past infancy, however, the predator gained an impressive 770 kg per year as it grew.

According to the authors of the new study, Scotty was one of the rare T. rexes in the fossil record that actually reached full maturity, which likely contributed to its record-breaking weight.

In order to determine Scotty's size and weight, the paleontologists measured the size of the animal's femur, which is a tried-and-true litmus test for how much weight that bone can support. The larger the femur, the heavier the animal.

Scotty, it seems, was prone to fights.

"By Tyrannosaurus standards, it had an unusually long life. And it was a violent one," Persons said in the press release. Scotty's skeleton shows signs of broken ribs, an infected jaw, and what might have been a bite from another T. rex on its tail.

The T. rex had a bite force of 3,538 kg, equivalent to the weight of about three Mini Cooper cars. No other known animal could bite with such force, according to paleontologists from the American Museum of Natural History. 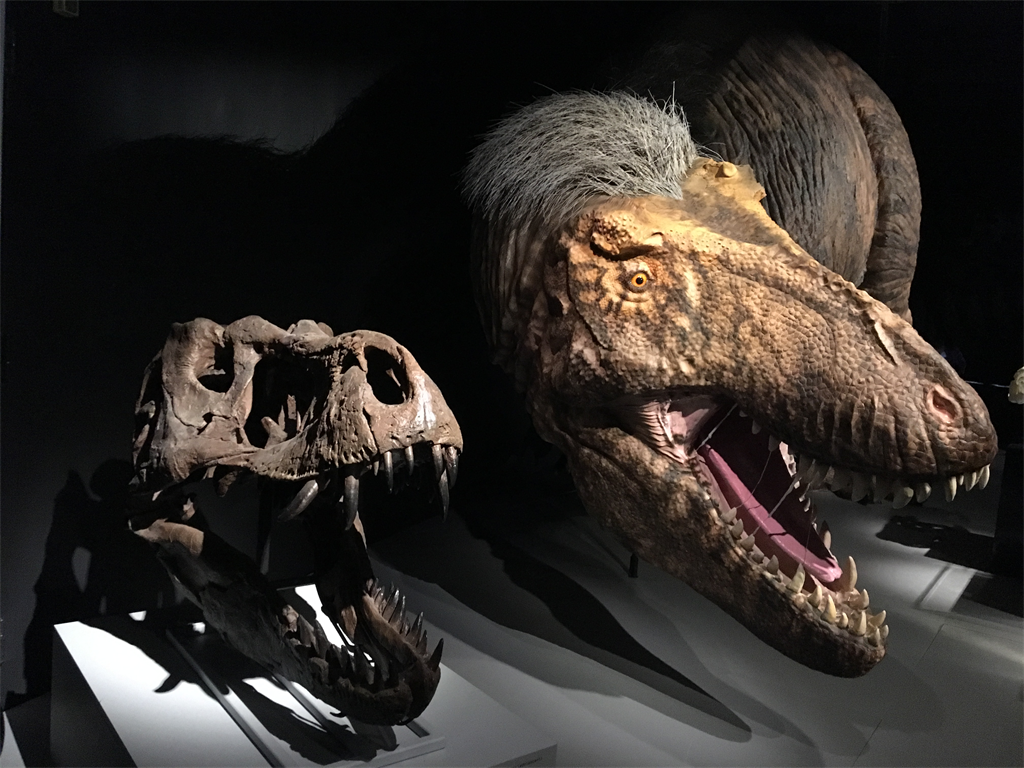 According to museum experts, the T. rex was also a cannibal. But scientists don't know whether the dinosaurs killed one another or just ate rexes that were already dead.

Ultimately, Scotty may alter paleontologists' understanding of how big and how old T. rexes could get. To date, only 20 or so T. rex specimens have ever been found. According to the study's authors, those skeletons have so far indicated that the "beasts tended to die before they passed the 8.8-ton (7,983kg) threshold."

In that context, Scotty appears to have been a lucky outlier that reached an older age and larger size than its peers.

"Despite its formidable size, T. rex was evidently not invulnerable," the authors wrote.