Sweden's controversial plan to deal with the coronavirus allows most people to go outside, visits bars, restaurants, and shops, and keep life relatively normal as long as they try to stay distant from each other.

Not everyone in Sweden is happy with the approach. But even as deaths rise, the majority seems satisfied.

A poll this week showed that just 11% of people in the country said they did not trust state epidemiologist Anders Tegnell, who is leading the strategy.

Mazdak Dorosti, who works in banking in Stockholm, the epicenter of Sweden's outbreak, told Business Insider: "Compared to the rest of Scandinavia, Sweden has a higher death toll. But we still have trust in the government, even if that seems a bit strange."

While some had strong objections, the majority of people Business Insider spoke said they're satisfied, pointing to society's high level of trust in authority as the reason why people can follow guidelines to stay socially distanced without many of the same rules as the rest of the world.

Ylva Beland, a medicine student at Umeå University, said "there are some people who think they should lock everything down and should have two months ago, but people are generally happy - especially the people who I hang out with, who are mostly medical students."

"Culture in Sweden is very trusting, so we follow medical suggestions."

And her father, Markus Beland, who is originally German and is a doctor in Jokkmokk, near the Arctic Circle, said he is "extremely happy about how the country is handling this."

"I think it's very reasonable. I am German, but I've never appreciated living in Sweden as much as I do now."

Karin Beland Lindahl, an associate professor at Luleå University of Technology, said Sweden's strategy makes sense because it is "a relatively high-trust society," which means people follow the guidelines.

"Not everybody, of course, but a lot of people do as they are told, for good or for bad - in this case for good." Sweden's state epidemiologist Anders Tegnell of the Public Health Agency of Sweden talks to reporters after a news conference on the coronavirus Covid-19 situation, in Stockholm, Sweden, on May 6, 2020.
CLAUDIO BRESCIANI/TT NEWS AGENCY/AFP via Getty Images

Professor Anders Lidström, who focuses on Sweden's politics at Umeå University, said this aids the government a crisis like the coronavirus: "It means that you don't have to force people to do things. You can issue recommendations, which in the Swedish case are treated as more than just recommendations."

He compared it to a recommendation not to eat something poisonous: "If you get that kind of recommendation, you know it's not a good idea to do, even if there are no laws against it."

Katarina Eckerberg, a political-science professor at Umeå University, said this has created the big difference between Sweden and other countries: "We have trusted more in the recommendations so we have fewer bans."

She said that "we are famous for following the rules."

Lidström noted that support for the ruling Social Democratic Party has increased even as the death toll has: "People's support for healthcare and public authorities is very, very high and has actually increased from March to April. "Traditionally, trust in public authorities is very high in Sweden, and there is no reason to believe this has weakened because of this crisis."

Dorosti said that Swedish people "trust the government, not necessarily in a political sense but because they trust the experts behind them."

Bodies like Sweden's Public Health Agency can't pass laws: they give the government recommendations. But Eckerberg noted that Sweden's constitution is "set up to give experts a bit more of a say in than in many other countries, so the government is reluctant to overrule experts." 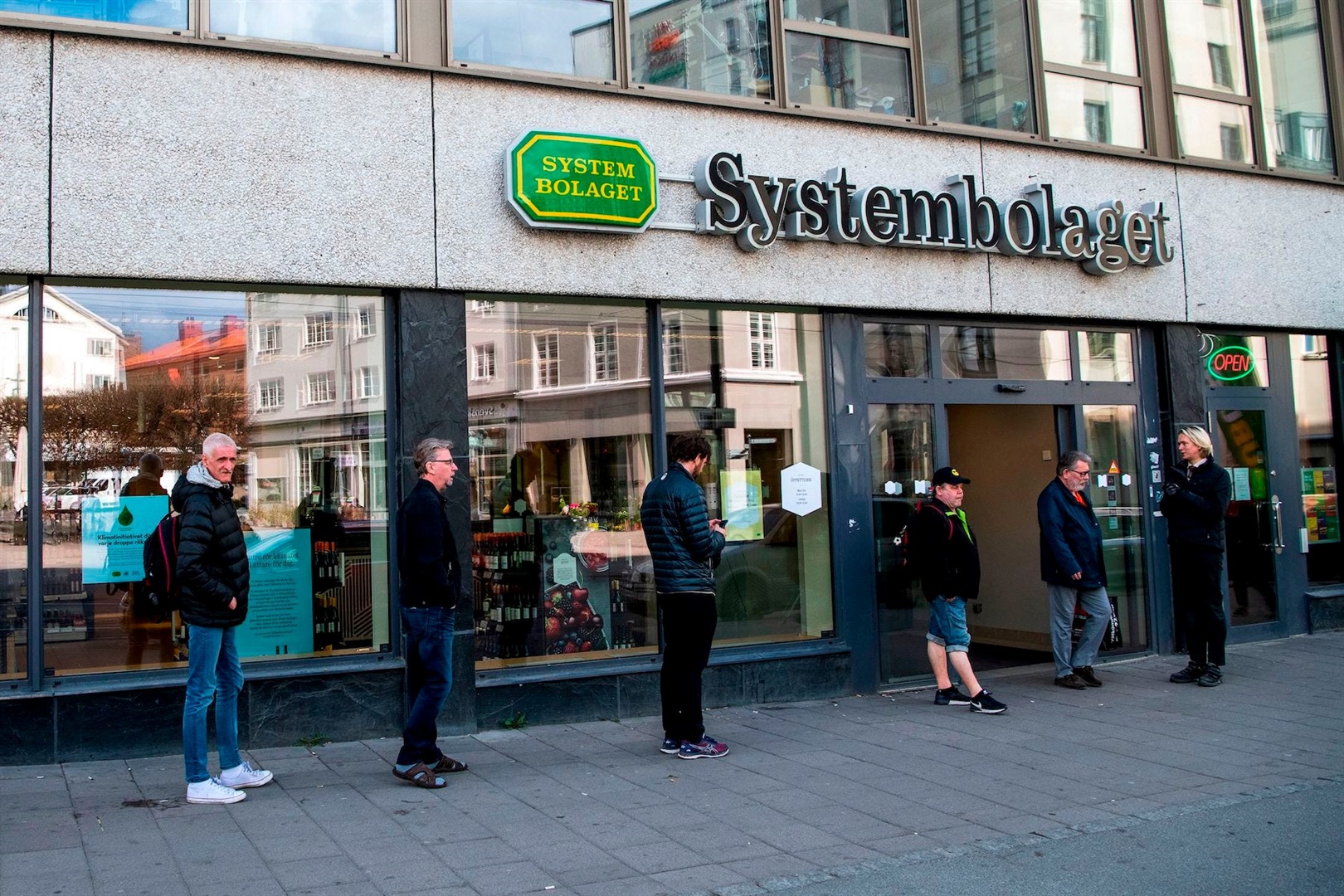 People queue up outside the Swedish government-owned store Systembolaget to buy alcohol on April 25 2020.
JONATHAN NACKSTRAND/AFP via Getty Images

This means the government can help avoid political fallout by treating the decisions as science-based ones, rather than political.

"It's the government's decision in the end, but there's a long tradition of politicians respecting the recommendations of the expert authorities."

Dorosti also said that people were motivated in Sweden because they saw the situation in Italy and Spain, which had the first outbreaks in Europe and were hit very hard.

"It didn't happen to Sweden first, so saw the consequences of what would happen if we didn't listen to the experts." A woman is reflected on an advertisement of the healthcare services of Sweden to instruct people to follow the 2 meters rule to reduce the risk of getting sick in Stockholm on May 4, 2020.
JONATHAN NACKSTRAND/AFP via Getty Images

Astrid Hedin, a senior lecturer at Malmö University who focuses on Swedish politics, said people are confident in the strategy because of how it is being communicated.

"I don't think that Swedes trust expertise or authorities blindly. Quite the reverse, we trust them when they reason and explain - which the Public Health Agency has been doing daily since the start of the crisis."

She added: "I think the attitude of the Public Health Agency is very important here. They have not presented themselves as infallible. Quite the reverse, they have emphasized that if any other country finds ways to address the crisis that seem to be working, Sweden will be quick to follow."

The people Business Insider spoke to also identified hallmarks of Swedish life that help slow the virus without new rules: People often live in big homes and alone, family gatherings and physical touch are not as common as in other countries, people already spend a lot of time outside, and the country is sparsely populated. 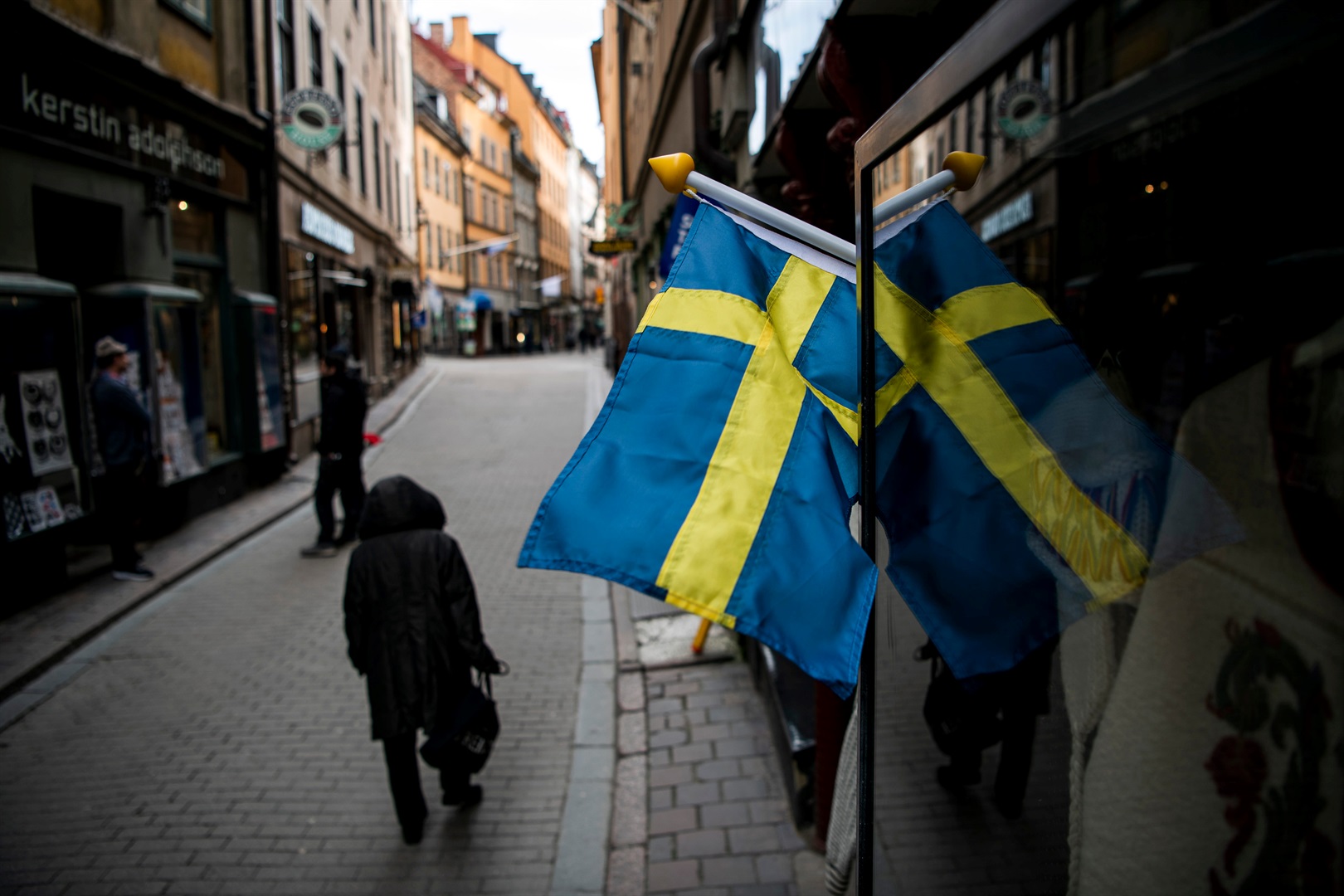 People walk in the main street of the old town in Stockholm, Sweden, on March 25, 2020, as the world fights the coronavirus.
JONATHAN NACKSTRAND/AFP via Getty Images)

Eckerberg said: "The social pressure is extremely strong. For example, me and the people in my research group don't dare to take the bus to work because it is recommended not to - there is a sort of shame or moral pressure for us all to do the same."

Lidström noted that its "too early to say" how successful Sweden has been, but said, "I think what Sweden has done is to try to find a way that suits the preconditions in this country."

It's likely that relying on trust, obedience, and experts would not have worked in other countries with different social habits and political systems.

And, in fact, it might not work in Sweden.

Sweden has banned gatherings of more than 50 people, kept distance between people in bars and restaurants, and has banned visitors to care homes. With people encouraged to socially distance and work from home, public transport is often empty.

It will take longer to know whether that has been enough. Sweden's death toll - over 2,900 on Thursday - is far higher than many countries with lockdowns or more restrictive measures. Tegnell, the state epidemiologist, said on Tuesday that the high death toll has been a surprise, and a source of worry.

He has said that the Public Health Agency isn't sure yet whether the country made the right call, and is constantly monitoring the situation.

But for now the virus is concentrated only in certain areas, the death rate is lower than the most-affected countries.

Sweden has emphasized that it wants to protect society from other health problems, like those that come with spiraling unemployment.

Many think Sweden's strategy is best long-term, but expect some criticism to come

People in Sweden say that avoiding a total lockdown makes sense because countries need to figure out how to deal with the virus for longer than a few weeks at a time, and instead hold back a second wave until a vaccine can be found.

Eckerberg said "people in Sweden broadly accept the objective is not necessarily to totally get rid of the virus, because we have to deal with it as long as we don't have a vaccine."

And she said some people are not looking too closely at the high death toll, because other countries may get a spike when they ease restrictions.

"We won't know how well this worked for a year or two, and it will be very difficult to compare countries," she said. People have lunch at a restaurant in Stockholm on April 21, 2020, during the COVID-19 pandemic.
Jonathan Nackstrand/AFP via Getty Images

Beland Lindahl, the professor, agreed that people are happy because the plan was to slow the virus: "Everybody is quite happy with how this strategy has worked so far, in terms of slowing the spread to help the health system."

Dorosti, the banker, said he thinks "overall, people are happy with the government as it has been clear that this is a marathon and not a sprint - not just shutting down the country for two weeks and then it's over."

He noted countries are reopening for their economies "and that's what the Swedish government did quite well: the balance between the virus and the economy. Other countries are opening, but it's not because the virus is gone."

But there will also likely be questions for the government to answer, like the high death toll, and specifically the number of deaths in nursing homes. People eat in a restaurant on March 27, 2020 in Stockholm, Sweden, during the coronavirus outbreak.
JONATHAN NACKSTRAND/AFP via Getty Images

Beland Lindahl said "What has not worked as well as everybody hoped is to protect the risk groups."

Tegnell, the state epidemiologist, has said it's not clear whether a lockdown would have protected those groups any better.

Hedin, the politics expert, told Business Insider: "There is nothing to say that Sweden wouldn't have had these same issues even with a lockdown."

But for some who are personally affected, these deaths have sparked deep anger.

Keith Begg, a Swedish citizen who lives in a Stockholm suburb, expressed frustration with how many people appeared to not be following social distancing guidelines.

He said the care home where his 84-year-old mother in law living has recorded coronavirus cases, accusing Sweden of "heinous treatment of the elderly."

"Saving lives must now be a priority. Lockdown is needed, without a doubt."