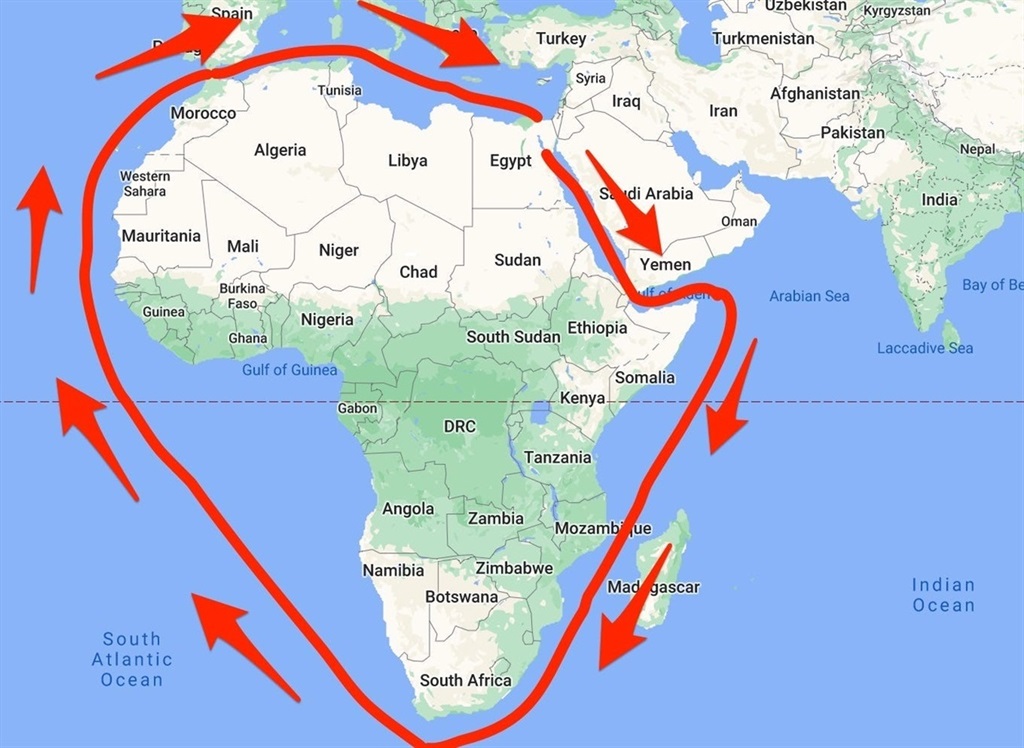 An illustration of a sea route from the Red Sea to the east Mediterranean without using the Suez Canal. Google Maps/Insider

Ships that rerouted round the southern tip of Africa to beat the Suez Canal blockage may ultimately not save any time by making the several-thousand-mile detour.

27 ships ended up abandoning routes via Suez, according to supply chain news site The Loadstar.

They made the difficult - and expensive - decision while the channel was still blocked by the Ever Given container ship, which was stuck for six days before being freed on March 29.

The first changed course on March 26, after the canal had been blocked for three days, and more soon followed.

The decision was effectively a bet that the extra time and effort from a longer route was preferable to waiting an uncertain length of time for the Ever Given to be freed.

Ultimately the backlog ended up at around 400 vessels. These began to move Tuesday, with officials predicting that the backlog would clear by the end of the week.

For the 27 ships heading round Africa, their plan appears to have backfired, as their new estimated times of arrival are roughly the same as if they had stayed.

Further, some of the vessels have been ordered to slow down to prevent a fresh backlog of ships forming in northern European ports if too many ships arrive at once.

European ports are scrambling to plan for an unpredictable flow of ships.

As of late last week, Europe's largest seaport in Rotterdam counted 59 ships headed its way, Bloomberg reported. Spanish ports are also making contingency plans for the coming days, according to the outlet.

The knock-on effect of the canal blockage on global shipping is forecast to be immense, as Insider's Grace Kay reported.

The industry was already under strain due to the coronavirus pandemic, which has made crew changes a logistical nightmare.

"This incident was not our [shippers'] fault and reasons why customers should be expected to pay extra, on top of record shipping rates, for goods delivered late and for reasons ultimately of the industry's own making, should be challenged," the outlet reported him as saying.

"The shipping industry is reminded that Suez is a canal in Egypt, not an excuse to price-gouge your customers," he added.