Stunning photos of wedding dresses from around the world 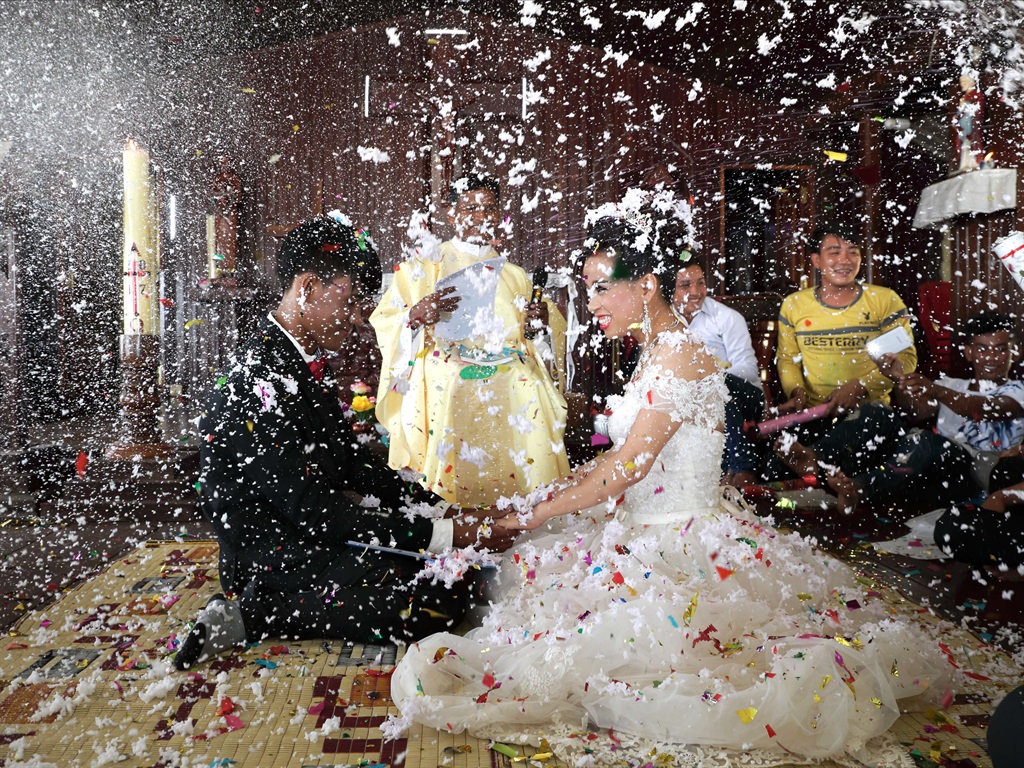 A bride and groom in Cambodia celebrate their wedding in a Catholic church.
Satoshi Takahashi/Getty Images

In cultures and countries around the world, no two weddings are the same, but there's a common thread: The dress is often one of the most-anticipated elements. No matter the colour, length, silhouette, or fabric, wedding dresses around the world are meaningful and symbolic in their own ways.

In Cambodia, a traditional bride may wear a gown that has belonged to her family for generations. In Morocco, the bride may have anywhere from three to seven outfit changes throughout the course of the ceremony. If you attend a wedding in Algeria, you can expect to see gorgeous henna designs on the hands and feet of the bride, and you may even get to attend a henna party the night before the ceremony.

Not all countries or couples follow specific traditions, and each wedding - and dress - tells a unique story. Here are 21 cultures' unique wedding-wear.

This Filipino bride wears an intricate, two-piece gown that resembles the national dress of the Philippines. Here, friends take a selfie before the bride's special day. According to Filipino superstition, it is bad luck for the bride to try on her dress a day before the wedding.

In Japan, the customary Shinto style of wedding calls for several bridal gowns worn over the course of the ceremony day. The wedding gown may be simple in colour and texture, according to INSIDER, while the reception kimono is traditionally red and gold and filled with symbolic designs like cranes and cherry blossoms, which represent good fortune. The bride's traditional post-ceremony outfit change also symbolises that she has taken on the colours of her husband's family. The Pakistani wedding consists of a number of traditions including "mayon," in which oil and turmeric are applied to the bride's face to make her glow for the tradition called "mehndi," in which she is beautified with bright clothing and henna, according to Pakistan Today.

In Uzbekistan, the wedding dress is traditionally a gift to the bride. After the wedding, the dress is hung in the home of the bride and her family so guests and friends can admire it. It's normal for guest lists at weddings in Uzbekistan to include more than 400 people, and a wedding costs $20,000 (R295,000) on average, according to the BBC. In 2018, the country's government proposed restrictions to extreme spending on weddings.

Many modern South Korean weddings are a blend of Western and traditional influences. Here, the bride wears a floor-length gown after being married at the Unification Church in South Korea. In Cambodia, the bride traditionally wears a silk dress called a sampot, often in a bold colour with woven detail that has been passed down from generation to generation. The sampot is Cambodia's national dress, and different styles, colours, and fabrics of the garment were traditionally used to signify one's social class.

Some brides in Cambodia opt for a more Western-inspired wedding dress that infuses elements of traditional Cambodian culture, like intricate head-coverings and lace details. The traditional bride's costume among the Khakas people, who live in Russia, features a wool hat and heavy petticoat to keep brides warm in below-freezing temperatures.

Historically, the Khakass were nomadic herders, and raising sheep and goats is an important economic activity for them even today, according to Britannica.

In Indian culture, brides wear colourful, ornate gowns called lehengas. It's customary for the bride to wear one lehenga for the ceremony and another one for the reception. Shades of reds and pinks are customary colours for Indian wedding dresses, as they symbolise happiness and good luck. According to Indian tradition, the colour red commemorates the union between two people and symbolises the rising sun, according to Brides.

Brides in India also wear elaborate scarves made out of flowers while taking part in rituals during the ceremony. The flower exchange ceremony is a special ritual during an Indian wedding ceremony. The bride and groom wrap each other in flower scarves, which signify they are excited to start their lives together and that they accept each other as husband and wife.

The ultra-Orthodox Jewish culture emphasises modesty. Here, the bride keeps with tradition by showing only her hands and face, wearing an ornate white head-covering and floor-length, lacy gown. Here, the bride wears a veil not necessarily because it is a widespread wedding norm. In Judaism, the custom of women covering their heads has biblical roots.

In Nigeria, the attire of family members of the bride and groom is just as important as the wedding party. Parents, siblings, and other family members wear "Aso Ebi," or pieces of a family cloth, and some families have specific cloths or colours they wear for wedding ceremonies. Nigerian weddings also include a tradition known as money spraying, where the bride and groom are quite literally showered with cash. According to blogger and author Courtney Brand, who had a Nigerian wedding ceremony, money spraying is the equivalent of "showering your loved ones with blessings."

One dress is just the beginning for the traditional Moroccan bride. A customary Moroccan wedding ceremony can include three to seven changes for the bride, but she traditionally begins the wedding wearing a long white gown with layers of ornate gold jewelry. In Moroccan weddings, the bride can select her kaftan colour based on a spiritual meaning. According to The Knot, yellow is worn to repel evil, and green brings good fortune.

A Thai bride may wear a traditional silk dress in one of six styles, depending on the customs of her and her family. Modern brides in Thailand often do not stick to one wedding dress convention, but one rule is deeply rooted in Thai culture: Neither brides nor wedding attendees should wear black to a wedding ceremony or reception, as it's believed to be bad luck and symbolise mourning.

The bride in Macedonia typically wears an intricately embroidered smock in red, white, and gold.

The village of Galicnik in Macedonia holds an annual wedding celebration that National Geographic calls "Europe's most traditional wedding festival." People from around the world travel to this village to celebrate newlyweds and reconnect with their roots.

Though white is perhaps the most common wedding dress colour in Western culture, it wasn't always the go-to choice. During the 19th century, women in the US simply wore what they considered their best dress, which typically happened to be white. Today, it's rare for Western brides to repurpose their wedding gown, but centuries ago, it was rare for women to only wear their wedding dress once. Even Queen Victoria wore hers (and her veil) again.

In a mountain village in Peru, the bride wears a dress that combines beautiful layers, colours and textures. The bride and groom also have a wedding poncho and skirt made for their wedding, according to weddingdetails.com. According to Balinese Indonesian tradition, the bride and groom exchange rings at the bride's home days before the official wedding ceremony to signify the upcoming union of the two families.

The Algerian bride traditionally wears a velvet kaftan, or long robe, with a hand-woven headscarf designed with detailed silk fringes. Brides in Algeria may change their outfits during the wedding ceremony, depending on the customs and traditions of the family - and there's a special woman, called a machta, whose sole job is to help the bride change in and out of her ensembles.

The Russian bride's veil is the centerpiece of the ensemble and is traditionally made of pearls and flowers and a delicate netting. It's also customary for the bride to wear white, which represents joy and purity in Russian culture. Another Russian wedding custom is that the friends of the bride steal her shoe, and the groom and his friends must pay a real or symbolic amount of money for the stolen item.

Inspired by kebaya, which are garments customary of Malaysia and the surrounding regions, the Malaysian bride wears a floor-length gown covered in jewels and gorgeous embroidery. In Malaysian culture, the bride has a wedding-day assistant, called a makandam, according to the National Library of Singapore, who is in charge of coordinating outfit changes, jewelry and makeup.