Magical photos that will make you want to protect our oceans An estimated 80% of the world's oceans remains unexplored, with a diverse range of species yet to be discovered, according to the National Oceanic and Atmospheric Administration.

But it's possible we might destroy our oceans before we even discover the extent of life living there. According to a 2016 study by the World Economic Forum, 8 million metric tons of plastic are dumped into the oceans every year, and that number is expected to increase. The oceans are full of distinct creatures from jellyfish and orcas to seals and turtles that have been threatened in recent years by pollution and over-fishing. In fact, humans have already been blamed for ending entire species.

Ahead of Earth Day on April 22, Insider found 20 photos of oceans and their inhabitants that remind us just what we have to lose.

The world is home to stunning beaches and crystal clear waters, like this scene in New Zealand.

Falling in love with underwater exploration as a boy in New England, Brian Skerry has been a diver for the past 40 years.

The ocean is home to some of the world's largest animals, like the humpback whale. Whales are among the creatures Skerry has worked with in his dives. "You become addicted to having these extraordinary encounters," he said.

According to National Geographic, humpback whales are found in every ocean in the world. Though they may get a bad rap for swallowing Pinocchio and his father, humpbacks mostly feed on krill, plankton, and small fish. Whales communicate and attract mates through "song" - hours of continuous wails and moans.

The oceans are home to bizarre but majestic creatures, such as jellyfish, which lack a brain, heart, and even eyes. As previously reported by Business Insider, jellyfish have been around for 500 million years and are made of 95% water. One species, the Turritopsis dohrnii, is thought to be biologically immortal because it can replenish its cells.

Jewel anemones come in an array of different colours such as green, purple, pink, and orange. 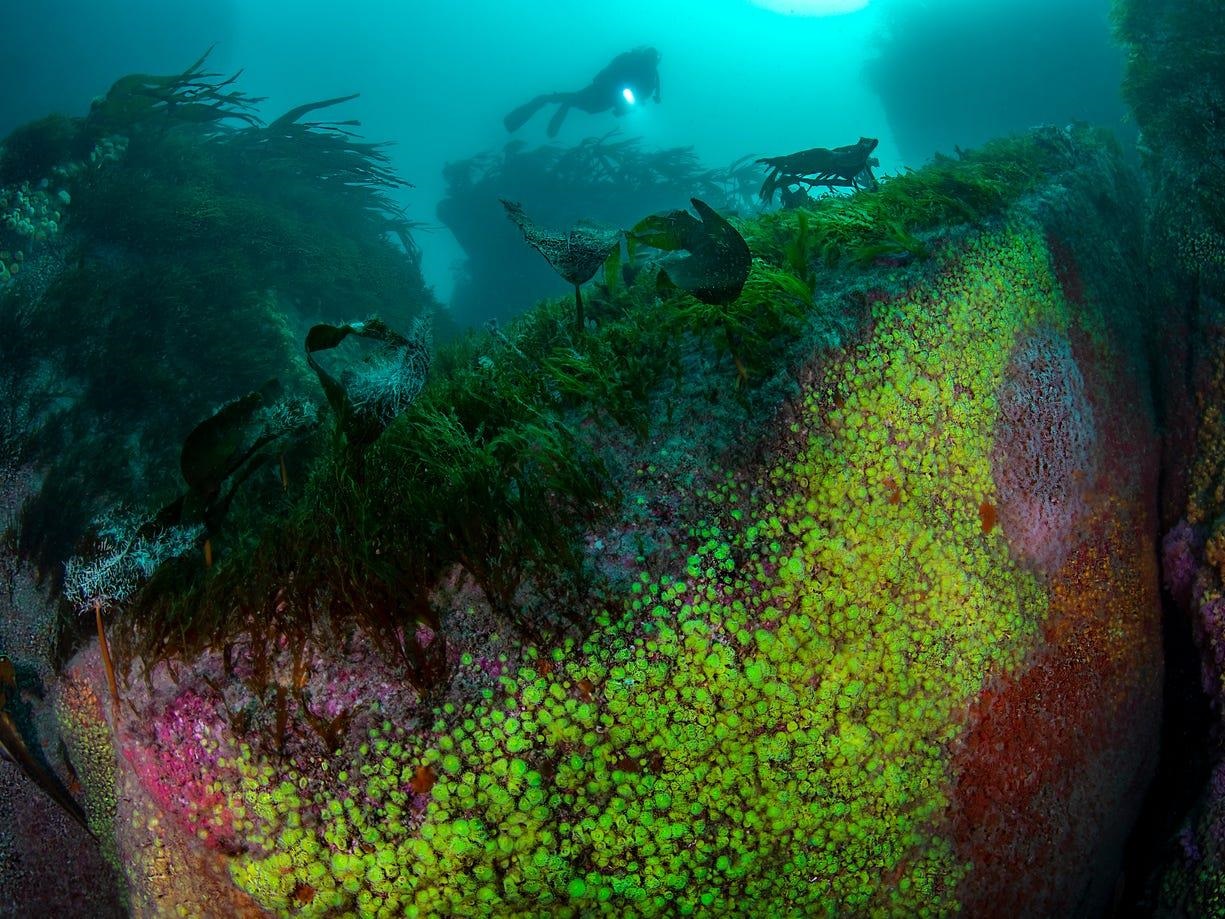 According to the Wildlife Trusts, each anemone has around 100 small tentacles and reproduces asexually.

Ocean creatures, like the clownfish and sea anemone, live together in a delicate balance. Immune to a sea anemone's sting, clownfish live among them. Popularised by "Finding Nemo," the clownfish is known for its distinctive orange with a white stripe. According to National Geographic, all clownfish are born as males, but some will irreversibly change sexes to be the dominant female.

Seals glide peacefully around an iceberg in this award-winning photograph. 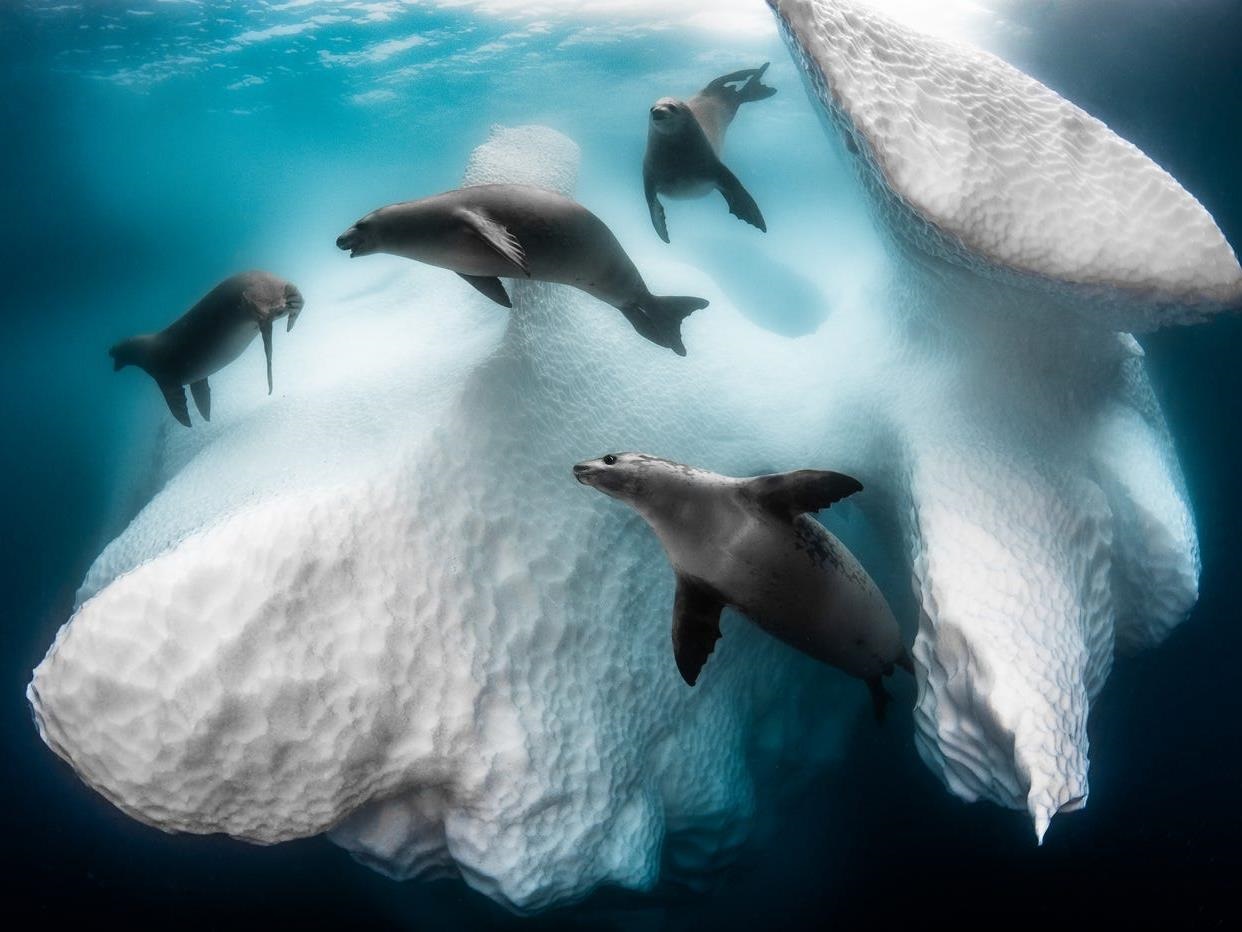 This photo by Greg Lecoeur earned him the top prize at the 2020 Underwater Photographer of the Year.

According to Britannica, there 32 species of seals, and they eat squid, mollusks, and crustaceans. Some species prefer open oceans while others can be found in coastal waters or on ice floes.

There are over 2,000 species of shrimp swimming in the world's oceans. According to Britannica, shrimp are closely related to other crustaceans such as lobsters or crabs. Larger shrimp are often called prawns.

The yellowline arrow crab lives among coral reefs in both the Caribbean and Atlantic Ocean. The arrow crab lives at depths of between 10 and 30 feet (3 to 9 metres). The crab's shape is reminiscent of a spider's.

But the reefs are home to some cuter creatures too, like this inquisitive goby fish. According to Britannica, goby fish are small carnivorous fish with more than 2,200 species worldwide. They are usually found near shores and living among reefs like this fish, which was captured peeking from its coral home in the Cayman Islands.

Both goby fish and yellowline arrow crabs could be affected by ocean acidification.

"The [ocean's] chemistry has changed and is becoming acidic," Skerry said. "We hear the term ocean acidification. That means anything with calcium that lives in the ocean is being eroded by sea water now, so coral reefs and seashells and little tetrapods that are baseline sources of protein for many animals. It's this terrible cascading effect."

Living in the mangrove forests and sea grass beds near the ocean floor, seahorses are known for their unique shapes and colours. According to US Fish and Wildlife, seahorses are found in the tropics, as well as more temperate areas. They usually live in mangrove forests and sea grass beds, which offer them camouflage from predators and where they dine on brine shrimp.

Luminescent sea creatures, like this reef squid, adapt to living in the dark depths of the oceans. The photographer, who was also recognised at the 2020 Underwater Photographer of the Year competition, used two colour lights to capture the effect in the photo. According to Britannica, luminescence in squids may be useful for attracting prey. Squids also have complex eyes, similar to a human's.

Dolphins are among the most social creatures found in the oceans. They usually swim together in a pod that can number a dozen or more. According to National Geographic, dolphins are extremely social creatures, communicating with each other through squeaks, whistles, and clicks. There are 32 species of dolphin in the world, including the Maui dolphin species, of which there are fewer than 100 in the world.

While they may be called killer whales, orcas are actually one of the largest species of dolphin.

According to National Geographic, orcas can weigh up to 6 tons and live an average of 50 to 80 years. As Business Insider previously reported, maternal grandmothers can play a large role in a young orca calf's life, similar to humans. Maternal grandmothers help their grandchildren survive by caring for and feeding them.

Unlike stingrays that lie motionless on the sea floor, spotted eagle rays are active swimmers in the world's oceans. According to Oceana, spotted eagle rays are usually found in warm waters near the coast but are also associated with coral reefs. Eagle rays eat clams, oysters, sea urchins, and shrimp, and they have venomous spines on their tails they use for protection against predators.

For underwater diver Nicholas Samaras, the ocean offers sights and creatures he would never see otherwise.

"Diving by itself is a unique experience," Samaras told Insider. "Whether you take photos or not, [it] is something that takes you into an unknown world with unique inhabitants."

The lemon shark gets its name from the yellow hue of its skin. These were photographed by Anita Kainrath, who won the "up and coming" category at the 2020 Underwater Photographer of the Year competition.

Among the most versatile creatures beneath the sea, octopuses have natural camouflage so they're able to blend in with the environment around them. As reported previously by Business Insider, octopuses are among the strangest creatures on the planet. You may know that octopuses have blue blood and can regrow their tentacles when severed, but octopuses can also rewrite their RNA, which is similar in ways to DNA editing. They may be adapting to changing temperatures through this method.

One of the ocean's largest predators is the great white shark, seen here swimming among a school of fish. According to PBS, the great white shark is the largest predatory fish in the world, dating back 11 million years. It can grow to 21.5 feet (6 metres) and be over 7,000 pounds. Popularised as a man-eater by "Jaws," sharks aren't actually that interested in eating humans. As previously reported by Business Insider, great white sharks are hunted by and afraid of orcas.

Nearly all species of sea turtles are listed as endangered or threatened. Among the largest living reptiles, sea turtles live long lives when not threatened by predation, according to US Fish and Wildlife. Sea turtles will spend almost their entire lives at sea, returning to shore when it's time to nest and lay their eggs.

Sea creatures, like this lobster in a traffic cone, try their best to adapt to trash humans have thrown into oceans. 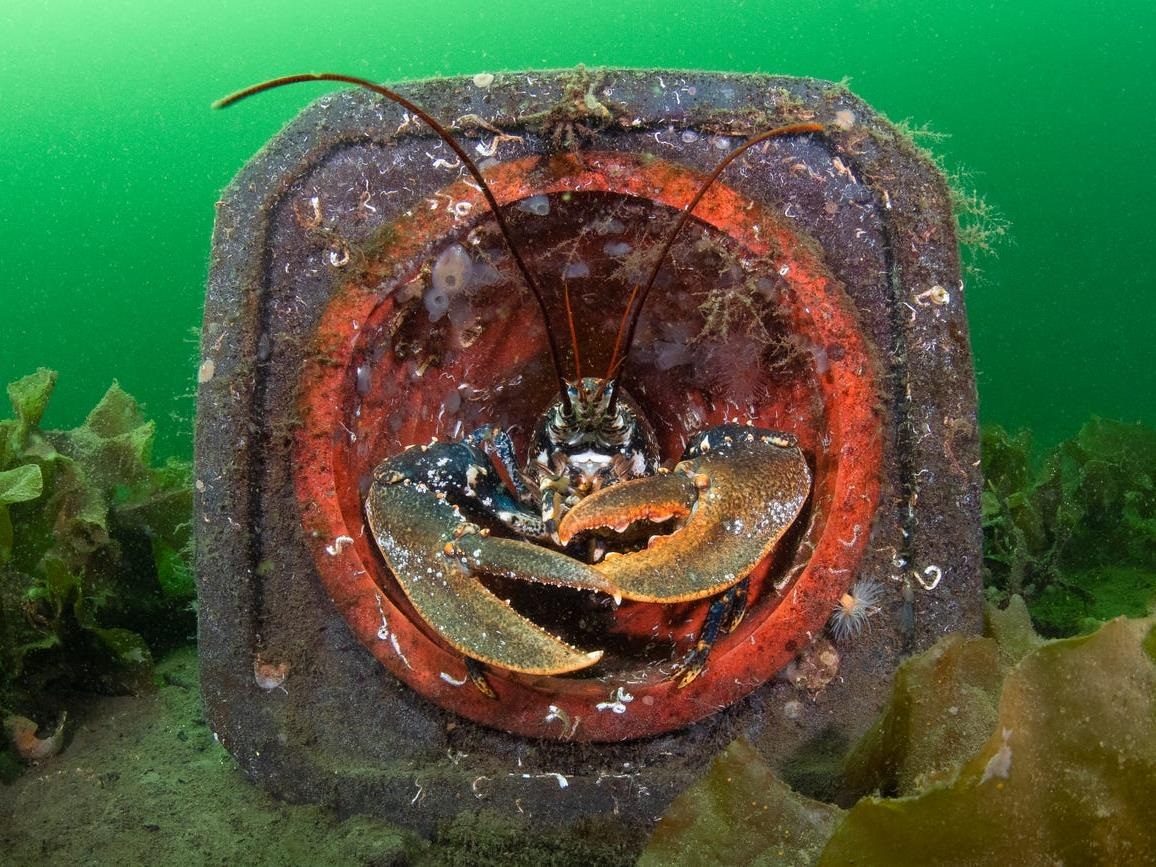 The lobster had made its home in the traffic cone, turning the piece of plastic into a temporary source of shelter and protection. This photo, by Kirsty Andrews, was also recognised by the 2020 Underwater Photographer of the Year competition.

"The ocean are a living organism. They affect and are affected by human activity," Samaras said. "Unfortunately, over-fishing, pollution, traffic, plastic and global warming are contributing to the change. The oceans affecting both, those who living in it and those who living by them. The signs are loud and clear but unfortunately humanity will learn from the mistakes when it will be too late, unless we change our habits and way of thinking. It's time to start respecting this planet."

Oceans and beaches – like this scenic California coast – are threatened by pollution, but people can make a difference, diver Brian Skerry said.

"We can make a real difference if we become informed consumers and informed citizens," Skerry said. "I think we are at this pivotal moment in history where for the very first time we understand the problems and the solutions, and we just need to work on those solutions. The choices we make, the decisions we make today, [are] going to determine the future of our species."