Creatures that live thousands of feet below the ocean's surface have developed special adaptabilities to survive. While some of them may look strange to us, they've developed these appearances over thousands of years to help them thrive in their extreme environments.

From qualities like bioluminescence, in which creatures produce their own light sources in the dark, to special resistances against the extremely high pressure in the deep sea, these animals have found a way to live in their otherworldly environment.

Some of these incredible photos were taken by an underwater robot operated by the Monterey Bay Aquarium Research Institute (MBARI), giving us a glimpse at these mind-boggling creatures.

Take a look at some of the most unusual looking creatures that have been discovered.

The frilled shark is a "living fossil" — a species that has retained some of the features of its primitive ancestors. With its grisly appearance, the frilled shark is an example of a "living fossil," an extant animal whose appearance has not evolved much through the millennia. The term can also apply to creatures that have few or no close surviving relatives.

What's most unusual about this prehistoric-looking predator, which is endemic to the Atlantic and Pacific Oceans, is the way it reproduces. In other mammal species, embryos are nourished via a placenta. However, frilled shark embryos obtain energy from yolk sacs and mothers only give birth once their offspring are capable of surviving on their own.

Growing up to seven feet long, frilled sharks primarily prey on squid. They've also been known to feed on fish - and even other sharks.

Hagfish are notorious for their repulsive feeding habits: Lacking jaws, they consume the decaying carcasses of other sea creatures by burrowing into them with tooth-like structures. There are estimated to be 76 species of hagfish - and some live as deep as 5,500 feet below the water's surface.

Also known as slime eels because of the goop their bodies produce to ward off predators, hagfish are notorious for their repulsive feeding habits. Lacking jaws, they consume the decaying carcasses of other sea creatures by burrowing into them with tooth-like structures.

Scientists estimate that there are 76 species of hagfish, which can grow to be between 16 and 40 inches long. Some live as deep as 5,600 feet below the water's surface.

As the name suggests, the faceless cusk eel has no face. 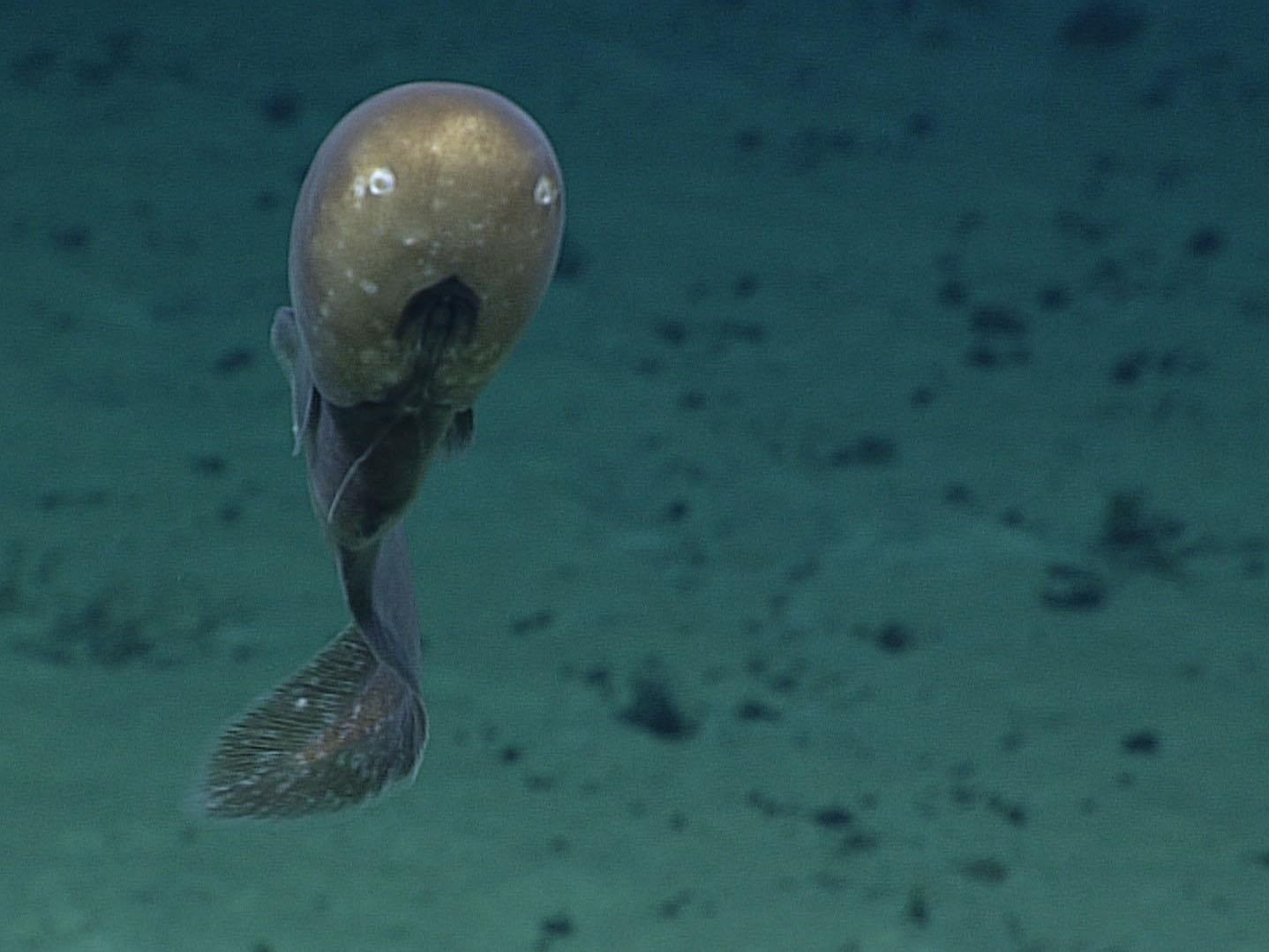 Like Dementors of the fish world, these eels don't have a face.

Apparently its mouth sits underneath the rest of its body, and is "protrusible," meaning it extends to catch food, and then disappears back inside of its own body.

Oceanographers aboard the HMS Challenger collected the first specimen of the species in 1873, which was the last time one was ever seen.

The Atlantic wolffish is a predatory species characterised by a mouth full of sharp, canine-like teeth. Characterised by a mouth full of sharp, canine-like teeth, the Atlantic wolffish lives up to its lupine moniker. A predatory species that feeds on hard-bodied or spiny invertebrates like sea urchins and large marine snails, this creature is not aggressive towards humans unless provoked.

You'll find the Atlantic wolffish, which can grow up to five feet long, in the North Atlantic and Arctic Oceans. Preferring chillier water, it lives at depths ranging from 328 feet to 1,640 feet.

With its lengthy, eel-like body, this fish is also known as a wolf eel.

The goblin shark has 50 teeth in its mouth. You can identify goblin sharks - a rare, bottom-dwelling species - by the shape of their snouts, which are elongated and flattened.

With 50 teeth in their mouths, these gruesome creatures command attention.

Interestingly, female goblin sharks are larger in adulthood than the males of the species. In Latin, the name of this cephalopod - which is neither a squid nor an octopus - is even more sinister. Its scientific name, Vampyroteuthis infernalis, means "vampire squid from hell."

But the vampire squid, found in the inky depths of the mesopelagic zone (about 3,300 feet below the ocean's surface), is gentler than its appellation indicates. Unlike its namesake, it doesn't feed on blood. Instead, this creature subsists on "marine snow," decaying organic material that falls to the ocean floor - kind of like the dead leaves that litter forests.

The anglerfish is most famous for the bioluminescent growth on its head, which lures prey to its death. The anglerfish, possibly one of the world's ugliest creatures, is most famous for the bioluminescent growth on its head, which lures prey to its death at the the lightless bottom of the ocean.

However, there are more than 200 species of anglerfish, divided into four groups: goosefish, batfish, frogfish, and deep-sea angler. Only females possess the iconic, bioluminescent angling apparatus. Most live at the bottom of the Atlantic and Antarctic Oceans, sometimes as far as a mile below the surface.

Due to their long, tapered bodies, grenadiers are better known as "rattails." There are about 300 species of grenadiers, a large-headed fish found in warm and temperate waters.

Due to their long, tapered bodies, these rodent-like creatures are better known as "rat-tails."

This ghoulish-looking creature is aptly named ghost shark, or chimaera. Like sharks and rays, the ghoulish chimaera is a type of cartilaginous fish. It also bears an uncanny resemblance to Zero, the dog from "The Nightmare Before Christmas."

Inhabiting temperate to cold waters around the world, chimera live at depths of 8,200 feet or more. There are about 47 species.

Archaeological evidence has proven that chimera have been around for millions of years. The earliest fossil specimen, a skull, was dated to about 280 million years ago. It was unearthed in South Africa in the 1980s.

The barreleye, also known as a spook fish, has extremely light-sensitive eyes on the top of its fluid-filled head. The barreleye was first described in 1939, but remained a mystery to scientists until 2009, when they discovered that its large, tubular eyes could actually rotate inside of its head. This rotational ability allows them to look upward for potential prey or face forward to see what it is eating.

Since barreleyes live at such depths where there is hardly any light, their tubular eyes help them use whatever faint amounts of light drift down to them. They also have two spots above their mouths which are called nares, analogous to human nostrils.

The blobfish was named the "world's ugliest animal" in an online poll. Named the "world's ugliest animal" in an online poll conducted by a British organisation called the Ugly Animal Preservation Society, the blobfish belongs to the fathead sculpin family - a group of fish that dwells in the Atlantic, Pacific, and Indian Oceans at depths ranging from 330 to 9,200 feet.

While most fish stay buoyant with the aid of a swim bladder, blobfish - whose bodies are less dense than water - utilise the ocean itself as a floating mechanism.

The most famous blobfish, Mr. Blobby, was discovered in 2003 off the coast of New Zealand and has inspired everything from plush toys to emoji. Preserved in ethyl alcohol, Mr. Blobby's final resting place is at the Australian Museum in Sydney.

The Japanese spider crab can weigh up to 20 kilograms. Native to the Pacific Ocean, the Japanese spider crab lives at depths of 160 to 2,000 feet.

Weighing up to 20 kilograms, it is one of the largest known arthropods, a group of invertebrate animals that also includes lobsters, spiders, and insects. These bioluminescent sea creatures create their own light in the darkness. They either live solitary lives or in colonies, and eat through filter-feeding.

The slender snipe eel can grow to be at least four feet long, but weighs only a few ounces. The slender snipe eel, one of the most compact deep-sea critters, can grow to a minimum length of four feet, but weighs no more than six or seven ounces.

Scientists aren't entirely sure how this eel catches its prey, but they speculate that the process involves the creature using its beak-like mouth to capture food.

Research also suggests that slender snipes spawn once and then die. They reproduce through a process known as broadcast spawning in which female and males respectively release eggs and sperm into the water column at the same time.

Related Links
An elderly elephant seal made a 5,000km journey for a 4-day summer vacation near Mossel Bay
Elsa the koala just met her new baby sister Anna, and the photos will melt your heart
A video of a bird with a massive shark-like fish is going viral for its parallel to 'Sharknado'
Next on Business Insider
Government wants public to report road damage on new SANRAL Pothole app