2 storm chasers got engaged as a tornado spiralled toward them 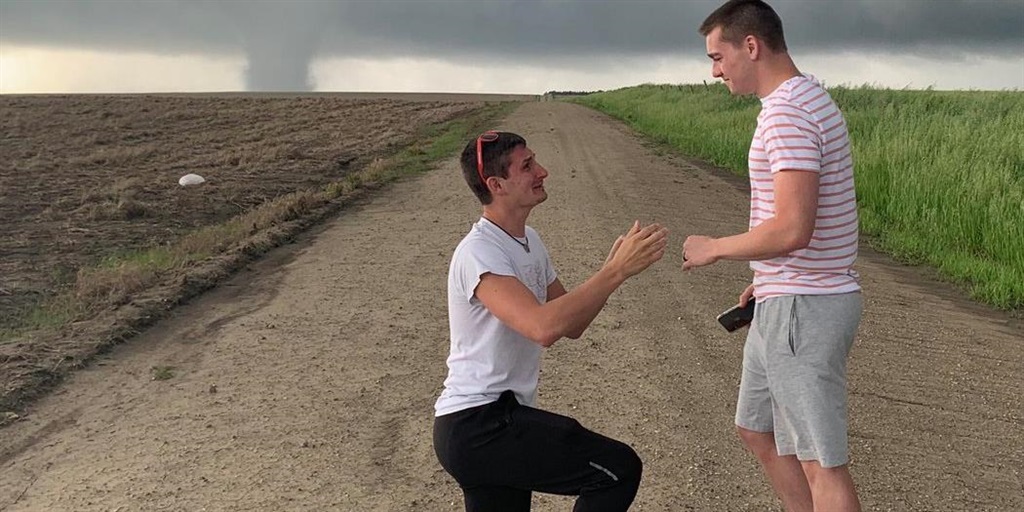 The moment he got down on one knee.
NimbusStorms/Twitter

Love can be thrilling, that's for sure.

And perhaps one of the best examples of this comes from Joey Krastel, a meteorologist and risk analyst for the Maryland Emergency Management Agency, and his boyfriend Chris Scott.

Early in their relationship, the couple bonded over a shared love of tornadoes and chasing extreme weather, NBC News reported.

The two mutually followed each other on Instagram, but it was Scott who made the first move and sent Krastel a message, according to the outlet.

Krastel does. At this point, he estimates he has chased 70 storms. And as his relationship with Scott blossomed, storm-chasing has been integral to their romance.

"That's why it was always in the back of my mind to get engaged during storm chasing," Krastel told NBC News. "I felt like it would be this perfect way to seal the deal."

On Tuesday, Krastel said the opportunity presented itself when they were chasing a storm in Kansas. As the tornado tore through Texas, it left "catastrophic" damage in its path, according to the Washington Post.

Read more: A Florida lawyer staged an elaborate fake DUI trial to propose to his girlfriend

On Tuesday, the National Weather Service issued a "tornado emergency." The Douglas County Office of Emergency Management told the Washington Post that no fatalities have been recorded, but 15 people have been injured.

Krastel and Scott were chasing the storm from Salina, Kansas, to Tipton with a group of friends. But all the while, Krastel was scheming.

"It all just kind of came together and happened so quickly," he said. "I was like 'OK, this is it.'"

And when he got down on one knee, he did it at precisely the right moment. Just look at that photo.

The 2 loves of my life pic.twitter.com/Cv4eviechZ

"The 2 loves of my life," he said, referring to the twister and his now-fiancé.

Speaking to NBC, Krastel said the tornado was closer than it appears in the image, making the moment even more exciting.

"I called to my friends to get back in the car," Krastel said. "I was just so emotional just because it was my happiest place, being with him next to the storms."

Related Links
A travel blogger proposed to his girlfriend at the top of an active volcano, and the video is as...
Passengers onboard an Emirates flight helped a man propose to his girlfriend, and the result was...
The best way to find out your partner's ring size before you propose
Next on Business Insider
Boris Johnson casts doubt on Ukraine peace talks, says Putin is like 'crocodile eating your left leg'