SpaceX's 164-foot-tall Starship Mark 1 rocket prototype stands in Boca Chica, Texas, amid a background of stars in the night sky in September 2019.
SpaceX

On Monday, SpaceX uploaded a nearly two-minute-long video to YouTube that paints a futuristic portrait of how the company plans to get people into space on the cheap with Starship.

The video is technically unlisted on the video-sharing site, but it appeared on a new website that SpaceX created to promote Starship and its aspirational capabilities. Importantly, the clip details an aspirational base of operations for Starship: SpaceX's private but as-yet nascent launch site at Boca Chica, a relatively remote yet inhabited area at the southeastern tip of Texas.

You can watch the video using an embedded player below:

Musk debuted the video during a highly anticipated talk on Saturday at the launch site while he stood between two rockets: one from SpaceX's past, called Falcon 1, and a towering prototype, called Starship Mark 1, of its forthcoming rocket system.

"There are many troubles in the world, of course, and these are important, and we need to solve them. But we also need things that make us excited to be alive," Musk said on Saturday. "Becoming a space-faring civilisation - being out there among the stars - this is one of the things that I know makes me be glad to be alive."

Before the animation was shown this weekend, it was unclear if and how SpaceX planned to expand its operations in South Texas to support operational Starship launches. But the video clearly shows expanded launch activities in South Texas, which Musk backed up with his own words.

"This is gonna sound totally nuts, but I think we want to try to reach orbit in less than six months," Musk said. "I think [it's] definitely possible that the first crewed mission on Starship could leave from Boca." For years, Musk has said the key to making humans an interplanetary species able to settle Mars - the "ultimate goal" of SpaceX - is making spaceflight as affordable as possible.

Right now, even the Falcon-class rockets that SpaceX builds, despite having reusable fairings and 16-story boosters, are not fully reusable. With each flight, multimillion-dollar hardware crashes back to Earth or is lost to space. With all other rocket systems, no parts are saved at all.

Musk thinks Starship could be the first fully reusable launch system. If his vision pans out, SpaceX may need only pay for fuel, minor refurbishment, and the system's development costs, which he told Rachel Crane of CNN Business on Saturday may be about $2-3 billion (R30- 45 billion) - not $10 billion (R151 billion), as he said in September 2018. The cost of sending one pound of stuff into orbit may, as a result, drop 100- to 1,000-fold, Musk has previously said.

"The critical breakthrough that's needed for us to become a space-faring civilisation is to make space travel like air travel," Musk said on Saturday. The Starship system would have two stages: a 164-foot-tall Starship spaceship, proper, and a roughly 223-foot-tall booster, called Super Heavy.

Each Super Heavy booster would use up to 37 car-size Raptor rocket engines to heave itself and a Starship on top toward space. Once high enough, the Starship - a crewed vehicle, a cargo-carrying spacecraft, or a fuel tanker variant - would detach and fire its six engines to reach orbit.

Meanwhile, the animation shows, the Super Heavy would plummet back to Earth, re-fire its engines, and land back on the concrete pad it launched from.

Depleted of much of its fuel, the Starship would then await a second Starship launch to refill its tanks. The two spacecraft would connect end-to-end in space, perform a refilling operation, and then disconnect. The fueled-up Starship would then have enough fuel to blast on its way to deep space, perhaps a higher orbit, the moon, or even Mars.

Although the animation doesn't show this, it's presumed the mostly empty Starship would scream back to Earth, using a skin of heat-resistant tiles lining its belly to deflect and absorb the searing-hot plasma generated by returning to Earth at around 25 times the speed of sound. The Starship would then land near a Super Heavy, receive an inspection, get craned back onto the booster, and be fueled up with methane and oxygen for its next flight.

The video suggests SpaceX's and Earth's future in deep space

"Both sites will make many Starships. This is a competition to see which location is most effective. Answer might be both," Musk tweeted in May.

During his nearly two-hour appearance on Saturday, Musk firmly asserted that notion.

"We are going to be building ships and boosters at both Boca and the Cape as fast as we can," he said. "It's going to be really nutty to see a bunch of these things. I mean, not just one, but a whole stack of them. And we're improving both the design and the manufacturing method exponentially." But the animation released by SpaceX, as well as other statements Musk made, suggest Boca Chica is seen as a likely base of operations for Starship.

Unlike the company's launch sites at Cape Canaveral, which are leased from NASA and the US Air Force, Boca Chica is privately owned - and has less red tape, no adjacent competitors (such as Blue Origin and United Launch Alliance), and has room for expansion.

When asked about plans for the site's future by Chris Davenport of The Washington Post, Musk said there will be "a lot more buildings and a lot more stuff - way more stuff than is currently here," including plants to produce liquid oxygen and methane using solar energy and carbon dioxide from Mars.

Musk said a single Starship site, if the vehicle is launched at its maximum rate, could see three of four launches a day - or more than 1,000 launches a year.

SpaceX is trying to buy out Boca Chica Village 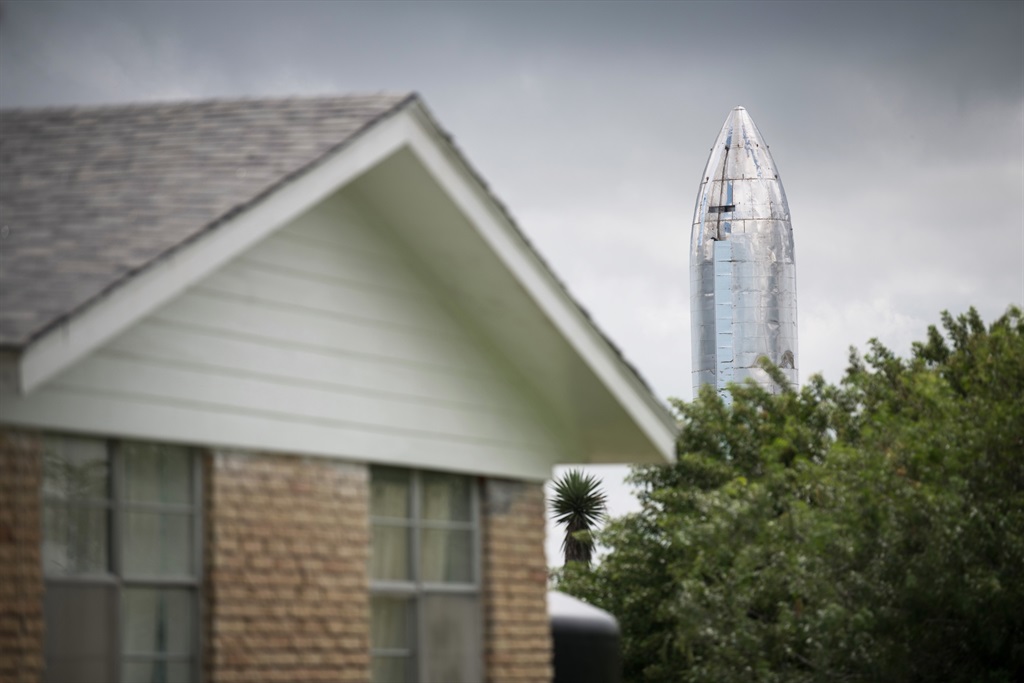 A prototype of SpaceX's Starship vehicle is pictured behind a home in Boca Chica Village, Texas, on September 28, 2019. SpaceX is attempting to buy out the residents of this community in order to expand spaceflight activities.
Loren Elliott/Getty Images

SpaceX first gained permission to build out a commercial spaceport in Boca Chica area in July 2014. It has since radically revised that plan, with tweaks approved by the Federal Aviation Administration, though it has encountered some hurdles along the way.

One of them is Boca Chica Village. As first reported by Business Insider, SpaceX - citing safety issues and increasing disruptions - recently offered to privately buy out the owners of about 35 residences there that sit amid its spaceport in a small residential neighborhood. Though SpaceX has offered three times an appraised value, many of the residents (most of whom are retiree-age) have told Business Insider they do not plan to accept the offer.

"I don't see any fundamental obstacles. We are working with the residents of Boca Chica Village because we think oh, it's time, it's going to be quite disruptive to their - to living in Boca Chica Village. Because it'll end up needing to get cleared for safety a lot of times," Musk said Saturday, in response to a question that Jeff Foust of Space News asked. "I think the actual danger to Boca Chica Village is low but is not tiny. So therefore, we want super-tiny risk. Probably over time, better to buy out the villagers."

It's unclear if villagers are barreling toward a standoff with SpaceX over their properties. Not-yet-published reporting by Business Insider suggests the company may let residents who don't mind the disruptions stay for now.

However, the Cameron County Spaceport Development Corporation, which was created to support SpaceX, does have eminent domain authority and can, with the vote of local commissioners, initiate a condemnation process. (SpaceX previously declined to comment on the matter.)

Related Links
SpaceX wants to buy a small US neighbourhood. If residents say no, a nonprofit that supports the...
The European Space Agency says it dodged a SpaceX satellite because the company wouldn't move it...
NASA photos reveal SpaceX is scouting these 9 places on Mars to land its first Starship rocket...
Next on Business Insider
TAKE A LOOK | SA's first biophilic building coated with plants breaks ground in Cape Town