The world's largest cruise ship has everything from an ice rink to a zip line, but it's the Starbucks that surprised me most The Starbucks aboard Symphony of the Seas is technically a Starbucks kiosk.
Sophie-Claire Hoeller

Ever feel like there's a Starbucks on every corner? Turns out there's one in the middle of the ocean, too.

Royal Caribbean's Symphony of the Seas is the world's largest cruise ship. The ship is 1,188 feet (362 metres) long, which, for perspective, is almost three-and-a-half times the length of a football field. It also has 18 decks, making it twice as high as the Washington Monument. The ship has everything from an ice-skating rink to a casino, as well as a zip line and a mini golf course, but somehow the Starbucks feels like the most surprising amenity on board.

The trippiest part? It's a totally regular Starbucks just like any other. It looks the same, feels the same, smells the same, and makes the same coffee. Only, it's on a giant ship. The Starbucks is in the middle of the ship's main promenade.
Sophie-Claire Hoeller

In fact, the baristas that work there are trained by Starbucks representatives, completing a course that, according to one barista, was two hours a day for five days and led to him to become a certified Starbucks barista. The menu is a slightly abridged version of that of a regular Starbucks including items like Pumpkin Spice Lattes and Mocha Frappucinos. The food is made and delivered by Starbucks in Miami ahead of every cruise. 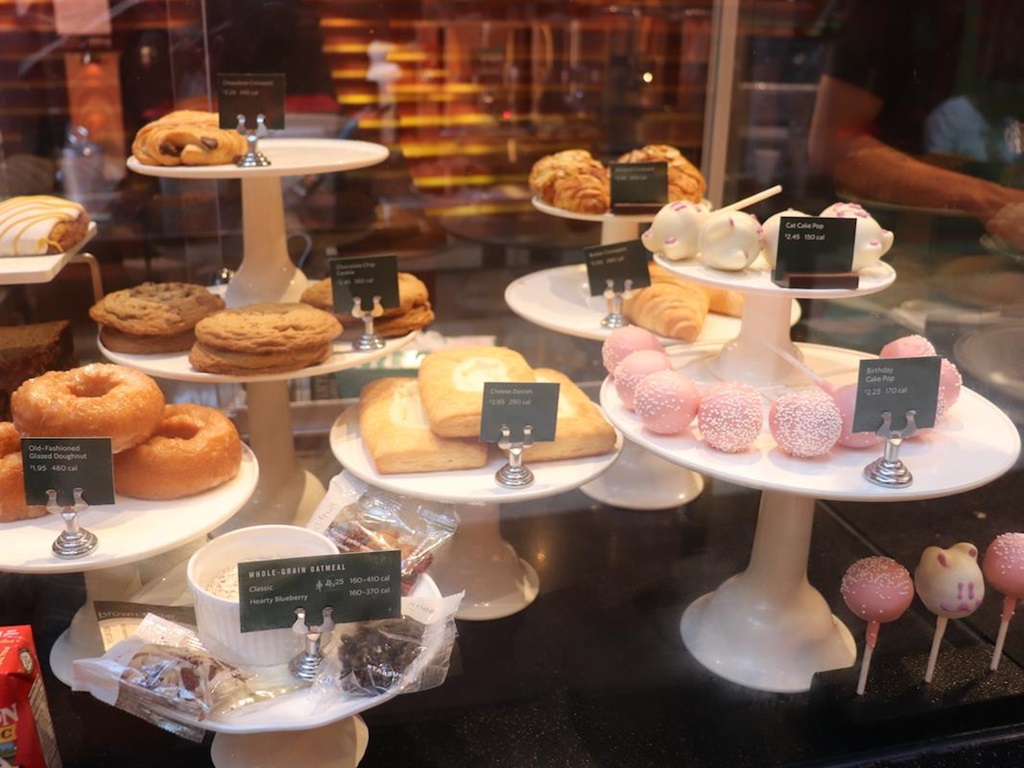 The food is made by Starbucks.
Sophie-Claire Hoeller

According to the barista, when teens come in with secret menu requests, like Snickerdoodle Frappuccinos, which have cinnamon dolce syrup as well as caramel and toffeenut, they can acquiesce as long as all the necessary ingredients are onboard.

The main difference is that guests can conveniently pay with a tap of their room key, adding the cost to their bill. The prices are pretty much the same as they are on land: I got a cold brew, which set me back $4.45. For reference, a PSL is $5.75, and a regular coffee $3.15. You can pay with your room key.
Sophie-Claire Hoeller

According to the barista I spoke with, between 9 a.m. and noon is their busiest time, and he estimates that they make between 300 and 400 drinks a day with cold brew being the most-ordered beverage. What makes the Starbucks such a surprise is just how regular it is. It's in the middle of the ship, surrounded by a Solera Beauty, Regallia Jewelry, some duty free glass cases, and a few bars and restaurants. With no windows around, it could literally be anywhere. And maybe that's the point. I enjoyed my cold brew with a sea view.
Sophie-Claire Hoeller

Related Links
Here’s what MSC Cruises’ new R200 million terminal in Durban will look like
Cruise-ship workers say they have so much sex that it's comparable to college
Video shows the moment a cruise ship nearly plowed into a Venice cafe during a storm
Next on Business Insider
Boris Johnson casts doubt on Ukraine peace talks, says Putin is like 'crocodile eating your left leg'