A 260km trip to the bank: here’s how hard Standard Bank’s branch closures will hit the Northern Cape, Free State, and other provinces Those who live in Sutherland, say the astronomers at the Southern African Large Telescope, will be hardest hit by the Standard Bank closing down a long list of its branches throughout South Africa. For them to get to a bank branch – any bank branch – now means a round trip just shy of 260 kilometres to Laingsburg.

For the people of Kenhardt in the Northern Cape (a town promoted for the tedium of its arid landscape) the trek will be pretty far too: a roughly 200 kilometre trip to get to Keimoes, which features a Standard Bank, for now at least.

For Jagersfontein in the Free State things are a little better: although the nearest Standard Bank is now 113 kilometres away in Bloemfontein, both First National Bank and Absa maintain branches in the tiny agricultural town of Trompsburg, which is only 52 kilometres away. As long as they switch banks, those in Jagersfontein can be at a bank teller after only 40 minutes of travel.

A large number of the branches Standard intends to close down are in Gauteng, around Cape Town, and in or near Durban – all of which leave many alternatives that in some cases mean trips of only a couple extra blocks for Standard Bank customers.

In the more rural reaches things are different, a Business Insider South Africa analysis of branch distances show. For those who want to, or must, stick with Standard Bank in more thinly-populated areas, the cost of regular in-branch banking will spike

From Bochum in Limpopo, where a Standard Bank has been formerised, the closest branch now is in Polokwane, some 85 kilometres away.

In the Eastern Cape the people of Barkly East will have to travel 73 kilometres to the closest Standard Bank in Lady Grey.

And in Mpumalanga, the closure of the Amersfoort branch of Standard Bank means the closest alternative is in Volksrust, 44 kilometres away.

Here is how far it is from the Standard Bank branches that have been or will soon be closed down to the closest alternative across the rural Northern Cape, Free State, Limpopo, Eastern Cape, Mpumalanga, and North West. 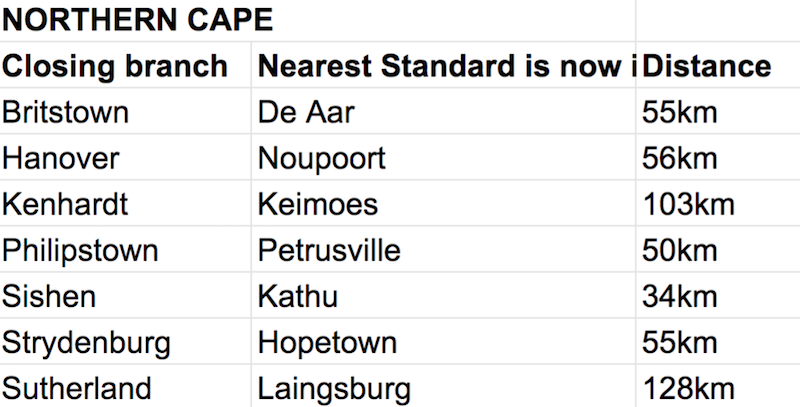