Just after 1 a.m., it became clear why it is called White Nights.
Harrison Jacobs/Business Insider
I was very excited to visit Russia for the 2018 FIFA World Cup, but my favourite part of the trip ended up being something I didn't plan on.

When I arrived in St. Petersburg, I found that the city was experiencing the so-called White Nights phenomenon. Located on the Bay of Finland, St. Petersburg is so far north that it has sunlight nearly 24 hours a day from mid-May to mid-July.

Toward the end of June, when the days are the longest, the sun sets after midnight and rises at about 2 a.m. But even then, the sky is never really dark.

It's an unusual feeling to see the sun setting so late and rising so early. It throws your biological clock out of whack, tricking your body into thinking it needs less sleep. Not a bad problem to have when you have a lot of activities planned for each day.

Local residents take full advantage of the long nights, sitting out in cafés and restaurants until late. Many restaurants and bars stay open 24 hours. Many of the tourist attractions stay open late as well.

There are downsides to the surplus of sunlight. Teams in town for the World Cup worried their players may have trouble getting enough rest because of the sunlight.

While I can barely pass a soccer ball, I was thrown off-kilter by the White Nights, often tossing and turning until 4 a.m. and sleeping through the middle of the day.

But being awake at odd hours provided a lot of time to see the city. I decided to take a photo at every hour to document the beautiful light - and the views, as you'll see here, were stunning.

I was excited on my first day in St. Petersburg to see the famous "White Nights." Unfortunately, the persistent sunlight from the night before screwed up my sleeping schedule. By the time I got out of the apartment, it was 3 p.m. The character of the light around 4 p.m. was very similar to midday in most other places. About 5 p.m. the light started to change. The sky was clear and the sun bright and hot overhead, but the buildings began to cast deep shadows. 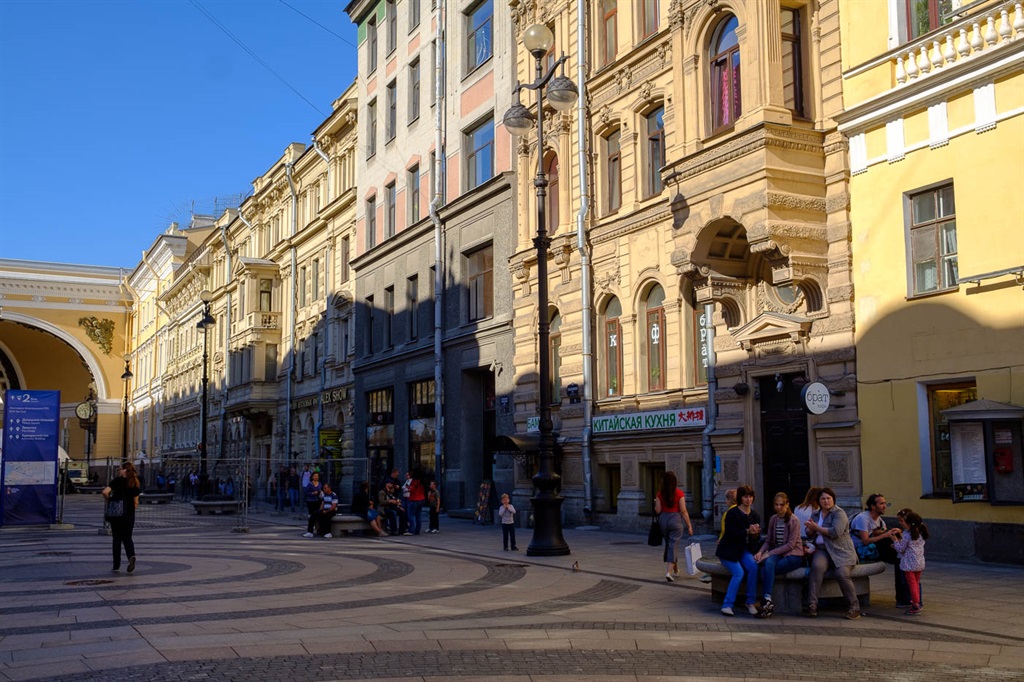 The hours between 5 p.m. and 9 p.m. were very similar, with slight changes in the angle of the sun. It was as if the sun had nowhere to disappear to. This is about 6 p.m. It was 7 p.m. and people were still lounging in the park as though it were high noon. At least the city never gets too hot because of how far north it is. It felt like a warm autumn day. About 8 p.m., the sun began to cast its first hints of "golden hour," the time before sunset when everything is blanketed in a golden glow. Golden hour during White Nights should probably be called golden hours. It lasts a long time. This is what it looked like a bit after 9 p.m. The drawn-out sunset produces spectacular colours in the sky on a clear day, as well as regal shadows upon the city’s buildings. This was about half past 10 p.m. 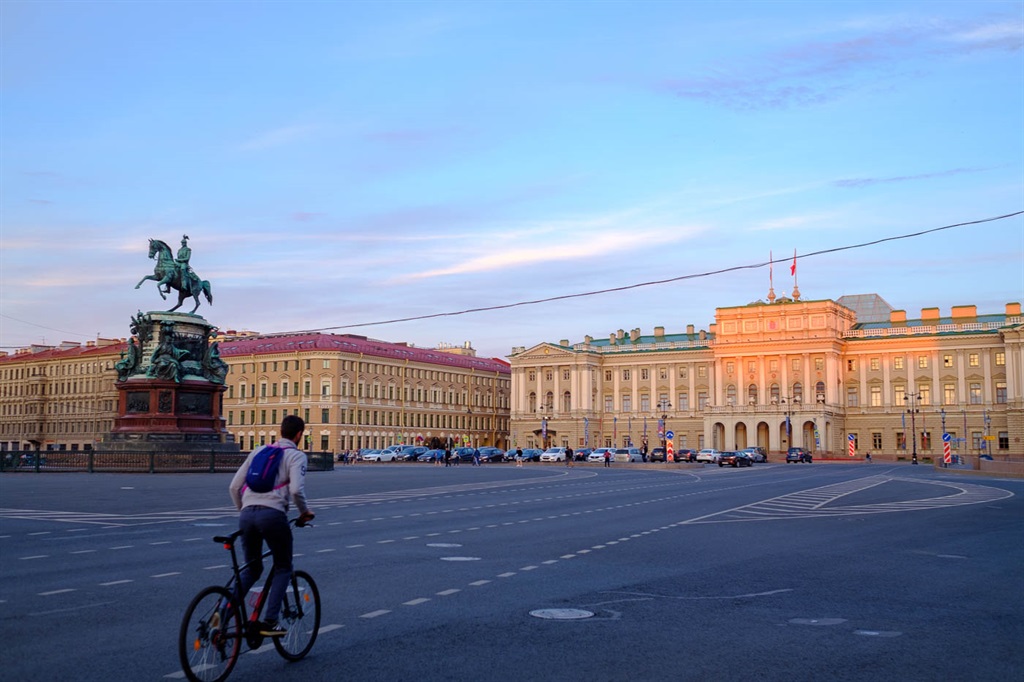 By 11:30 p.m., the sun was disappearing behind the horizon with a few last gasps of light. Petersburgians take advantage of the long nights. At least a dozen fishermen were casting their lines into the Neva River as the sun set. Things were much different a few nights earlier, on the night of Scarlet Sails — the city's summer festival marking the end of the school year and the longest day of the year. The sun hadn’t even set at a quarter past midnight. Scarlet Sails is the biggest night of the year in St. Petersburg. Everyone comes out to the banks of the Neva River to watch a grand display of fireworks, a water show, music, and the sailing of a replica 1700s-era boat with red sails. Just after 1 a.m., it became clear why it is called White Nights. A couple of days later, when I was outside a bar deeper into the city about 2 a.m., I snapped this shot. While the sun isn't directly visible, you can see light reflecting off the building. It never gets fully dark. About 45 minutes later, just before 3 a.m., the sun was rising over the horizon. You know that feeling where you start to see the sunrise and realize you're going to get a bad night of sleep? I had that all week. By 4 a.m., it's light out. The sun is blocked here by the buildings outside the apartment I was staying in, just off the banks of the river. 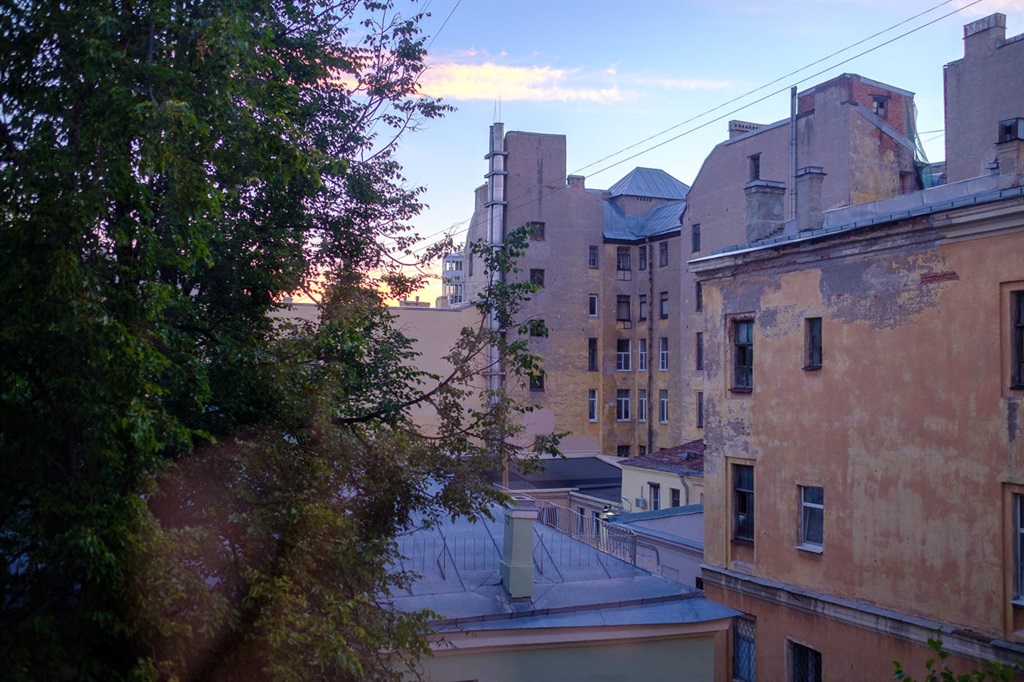 I have to confess I never saw 5 a.m. Well, except when a gash of sunlight sneaked past the bedroom curtain, reflected off a nearby mirror, and temporarily blinded me.

When I walked outside a bit after 6 a.m., it looked as if it was nearly noon. It’s a disorienting feeling. I was awake for the hours between 6 a.m. and 11 a.m. only once. It's like having jet lag that won't go away. This photo was taken about 7: 30 a.m. The light is so vexing for the human body that the soccer teams that had to train near St. Petersburg for the World Cup had special curtains installed in their hotels and were required to close them a few hours before bed. If you don't shut out the light, you won't feel tired. I took this photo on my last day in the city. It was a little over a week after the longest day of the year, but the sun was still high in the sky after 8 a.m. Over the weekend, I left St. Petersburg to drive north to the neighbouring Republic of Karelia, a northern region of Russia. The White Nights are much the same there. This is what it looked like about 9 a.m., two hours north of St. Petersburg ... It’s hard to describe, but the character of the light isn't unique only at night, but during midday as well. Everything looks like an oversaturated photograph. This is noon ... The White Nights are undoubtedly the best time to visit northern Russia. During the winter, the hours are flipped, with darkness for most of the day. This was 2 p.m. in Karelia. This story was originally published in July 2018.