Getty Images
Everyone's heard some version of a hangover cure.

Some people swear that remembering to chug water before bed will cure a hangover. Others have more elaborate routines, involving various types of food, drink, or physical activity.

From what we can tell, hangovers are at least partially — perhaps mostly — caused by the byproducts our bodies create when we break down alcohol. We know that people whose blood alcohol content spikes quickly suffer more severe hangovers, meaning that doing a bunch of shots is likely to send you down a dark and painful road. And we know that the more people drink, the worse the hangover they suffer after. Unfortunately, this also means that a lot of hangover "cures" are myths. Some of them might help you feel slightly better, but the degree to which they are a cure is questionable.

In honour of St. Patrick's Day here are some of the most common myths — and the truth behind them.

Myth: Hangovers happen because you're dehydrated — chug a glass of water before bed and you'll be fine. REUTERS/Francois Lenoir
Truth: Drinking dehydrates you, and that dehydration usually accompanies a hangover but probably isn't responsible for it.Most hangover symptoms come from the breakdown of alcohol, not dehydration. And while we need water in our bodies to break down alcohol, we still won't feel better until our systems have dealt with the byproducts of that process.That said, no one wants to be dehydrated and hungover at the same time. So if you feel thirsty, chug away.

Myth: Liquor before beer, you're in the clear. Truth: This isn't entirely false, but that's not because the order you drink things changes the way your body processes them.

Alcohol is alcohol, and too much of it will make anyone feel sick.

That said, people who switch from beer to mixed drinks or straight whiskey may be less likely likely to monitor their alcohol consumption and thus drink more.

Plus, at least one small study indicates your body metabolises carbonated drinks like beer and mixed drinks faster than higher-concentration alcohol (like a shot of whiskey). Adding liquor to a stomach-full of beer could, in theory, create a sort of mixed drink that would metabolise faster than one or the other on its own.But in general, the biggest effect here probably comes from being less careful with liquor after a few beers.

Myth: You can cure a hangover with 'hair of the dog.' 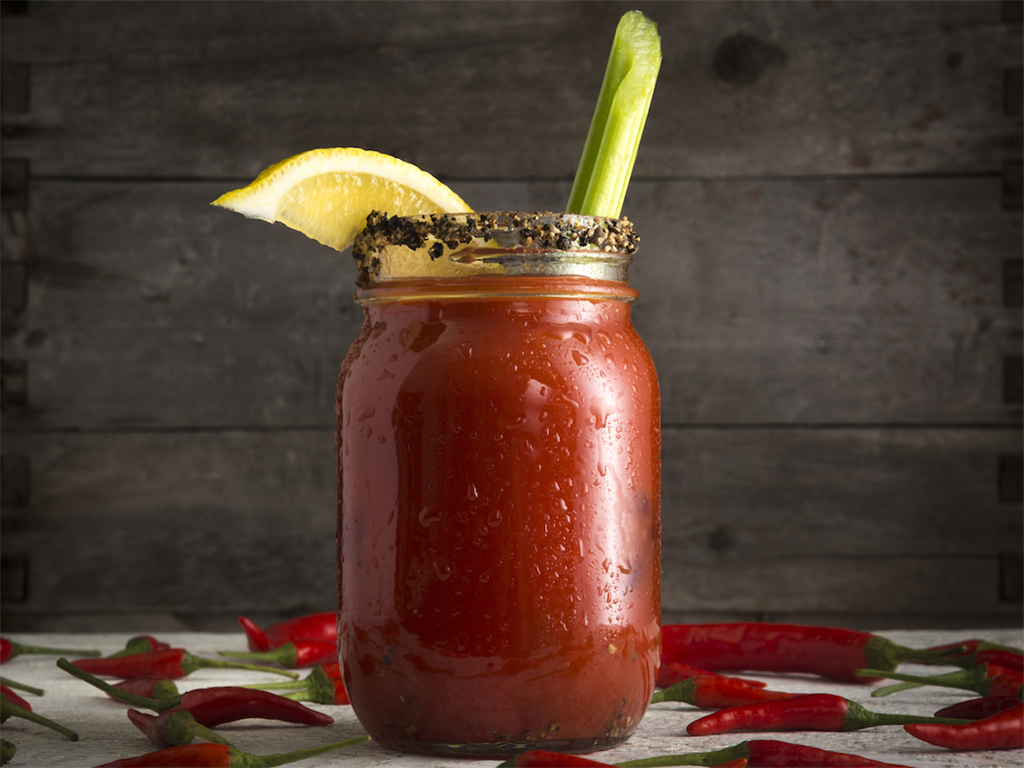 Truth: Having a drink the morning after a session can make you feel better, but it's not curing your hangover — it's prolonging it.

Your body prefers to deal with ethanol instead of the painful byproducts created by breaking alcohol down, so if you give it more alcohol, it can temporarily take away the pain of breaking down alcohol's byproducts. But really, that's just putting off the pain. Your body still has to break down those byproducts, which means the pain may come back even worse later.

Some researchers think this "hair of the dog" effect is why hangovers may be a risk factor for alcoholism instead of a natural deterrent to becoming an alcoholic. Studies show that alcoholics get some of the most severe hangovers around.

Myth: Stick to one type of booze and you won't get hungover. Truth: In many ways, this seems related to the "liquor before beer, you're in the clear," myth.

But if you just drink whiskey all night, that's not a recipe for feeling fine the next morning. The type of drink you have can have an impact on how you feel, however.

Since carbonated drinks can cause blood alcohol to spike faster, that might cause a more severe hangover (explaining champagne hangovers).

There's also some truth to the idea that alcohol with more congeners (a chemical component of booze that's more often found in dark drinks like bourbon, red wine, and dark rum) can lead to a worse hangover.It's not all bad, though. One of the authors of a study showing that also told Scientific American that some of those congeners in whiskey helped "protect the stomach lining from damage."

Myth: A late night or early morning diner meal will stave off the hangover. Truth: If you're just hungry, sure, bacon and eggs are delicious.

But the main way that food can help with hangovers is by slowing down alcohol absorption in the first place. That means you need to eat before or while you are drinking, not after.

Having food in your stomach means your blood alcohol content won't spike as quickly, which is something we know makes hangovers worse. Eat before you drink and you'll feel better. Eat while hungover and you may be less hungry but your head will keep pounding.

Myth: Line your stomach with olive oil or milk and you won't get hungover. Truth: Some people rely on a glass of milk, others recommend a spoonful of olive oil (this likely depends on where your grandparents come from).

But as Duane Mellor, a lecturer at Coventry University and director of the British Dietetic Association explains, "lining your stomach" isn't a real thing.

That said, both milk and olive oil are foods, and having a bit of food in your stomach may slightly slow down alcohol absorption, especially if it's a slower-digesting food containing fat or protein.

Myth: Pop two ibuprofen before bed and you'll be fine. Truth: This is a dangerous and bad habit to get into.

First of all, anti-inflammatory drugs generally only last 4 to 6 hours, so you'd probably want these after waking up, not at night. They may make you feel better. Yet even so, anti-inflammitories like ibuprofen can cause stomach problems if taken with a lot of booze. (Don't ever take Tylenol or acetaminophen with alcohol, since that can cause serious liver damage.)

There are even indications that some of the anti-inflammatories we think of as "safe" could significantly increase the risk for a heart attack, meaning they probably aren't worth it, even for a terrible hangover.

Myth: Pedialyte, Gatorade, and other sports drinks take the edge off a hangover. 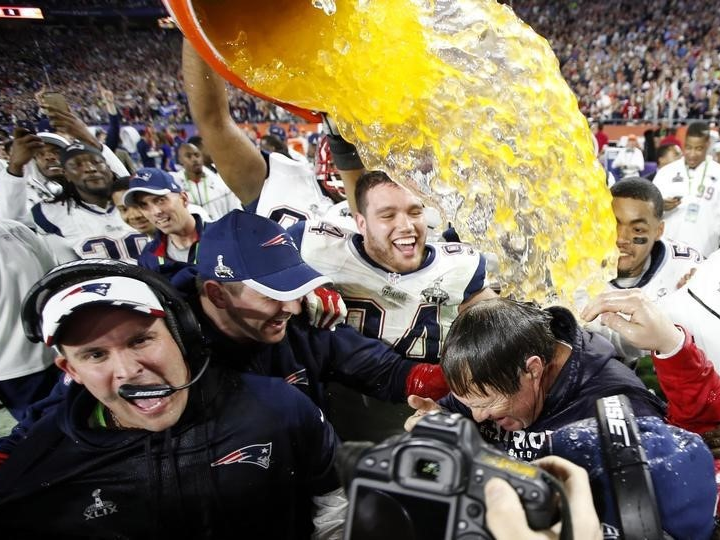 Intravenous drip bags are pictured on the Hangover Bus in the Manhattan borough of New York January 1, 2015. The Hangover Bus offers different IV solutions to help aid in hangover recovery, according to organizers. The drips, which take about 40 minutes, are offered at prices ranging from $129 to $169.
Thomson Reuters

Truth: If hangovers were caused by electrolyte shortage, this would be true. But you aren't suffering from an electrolyte shortage if you've been eating remotely normally. Even ultramarathoners who've been running for 24 hours still generally don't need supplementary electrolytes. Go ahead and hydrate if you want. But know that sports drinks are often full of unnecessary sugar.

Myth: An expensive IV service can get the job done. Truth: You don't need to pay a premium to make your hangover go away. If you're suffering from severe alcohol poisoning and have been vomiting or have had your stomach pumped, you certainly may need intravenous rehydration. But most of the time this is just an expensive way to get some of the same hydration, electrolytes, and anti-inflammatory drugs you could give yourself for far cheaper, whether or not they work.

Myth: Nothing works for a hangover. 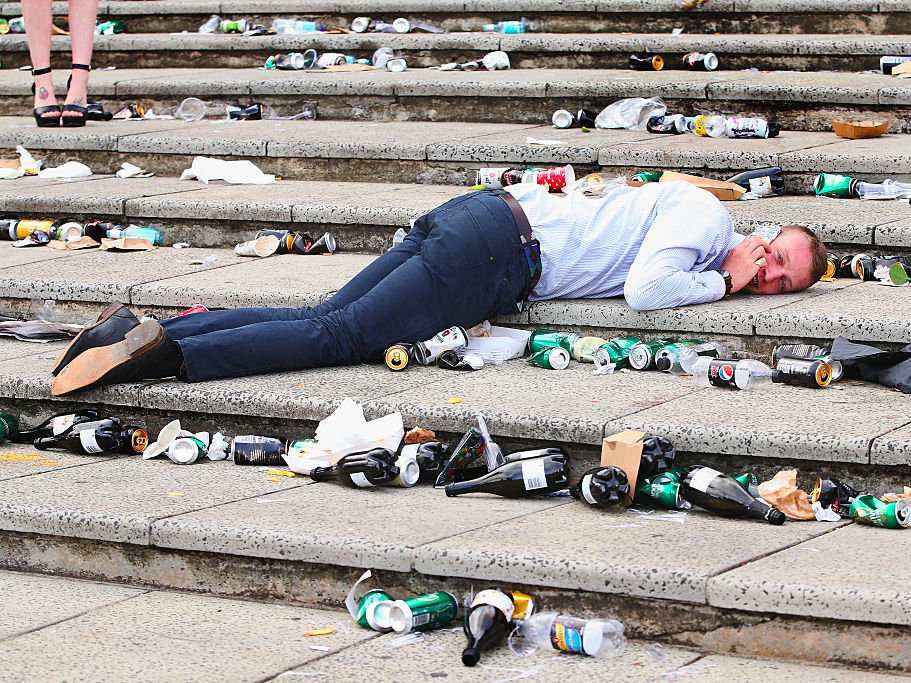 Truth: Dealing with a hangover and searching for a cure can be pretty depressing. But that doesn't mean nothing works.

There is some preliminary data indicating that drinking Korean or Asian pear juice before your night of debauchery (a traditional hangover prevention approach in East Asia) might lessen the pain, but it's too soon to say for sure whether or not that really works.

Aside from that, it's possible that one of the above approaches has "worked" for you. That's most likely the placebo effect, which is incredibly powerful (and even responsible for part of the effect of how regular medications work). And that's okay!

In general, if there's something that makes you feel better — exercise, a hot bath, a good meal or movie — and it's not harmful, you may as well give it a shot.Otherwise, the only real cure is rest and time.