We tried Spur’s vegan menu. The ‘chicken’ schnitzel sucked – but the burger is great Spur, like other local restaurants, offers vegan friendly meals, and we may have not been swayed by the vegan chicken, but the Beyond Burger was definitely a hit.

The steakhouse chain introduced 100% vegan friendly food on 20 November 2019, with meals such as the Beyond Burger, Crumbed Veggie Burger and Veggie Schnitzel.

“The menu was quite broad then,” said Spur's Head of Operations, South Africa Archie Mpofu. “Now when we changed the menu, we filtered out stuff that was not so popular such as the Bean Burger, chicken style Vegan Strips, and pizzas. The Beyond Burger is the most popular one," he said.

According to Mpofu, Spur initially introduced the Bean Burger which was later replaced by the Beyond Burger as customers were already familiar with the brand.

The Beyond Burger patty is a completely plant-based burger that looks, cooks and tastes like a beef patty. It is made of pea protein, rice protein, natural flavours, beetroot juice colour – to imitate blood – and more.

Other vegan items on the menu include the chicken-style Veggie Schnitzel which retails for R84.90 and the Crumbed Veggie Burger for R76.90. Dressings for both meals have been replaced with chilli sauces which are 100% vegan friendly.

“Spur is predominantly protein-based, with beef, pork and the like. We’ve got a section on the side that’s vegan so that we do not mix the two.

We tried the Beyond Burger, Veggie Schnitzel and Crumbed Veggie Burger and here’s what we thought:

The Beyond Burger, which retails for R134.90, looks like a beef burger. Inside the Beyond Burger patty (Business Insider / Phumi Ramalepe) Inside the Beyond Burger (Business Insider / Phumi Ramalepe)

At first glance it looks just like a regular Spur burger. From the outside it looks thick, meaty and saucy, thanks to the BBQ marinade. When cutting it open to see the inside, it looks like it's truly made of meat.

It smells meaty and delicious, and it has the meaty texture when chewing you get from a normal beef burger.

“If I didn’t know, I’d say it’s a normal beef burger,” said one of our meat-loving tasters. “The texture is just right. It’s almost as if I’m eating the real thing,” he said.

Our other taster was impressed by the fact that it doesn’t leave a strange after taste like all the other vegan beef burgers she’s had before.

"I have nothing to complain about here. It’s 100% perfect. Wouldn't change a thing,” she said. Even our nine-year-old taster was sold.

On the outside, the patty looks golden and crunchy, it feels so too when chewing. Although the inside feels tender, it looks nothing like an actual chicken patty. 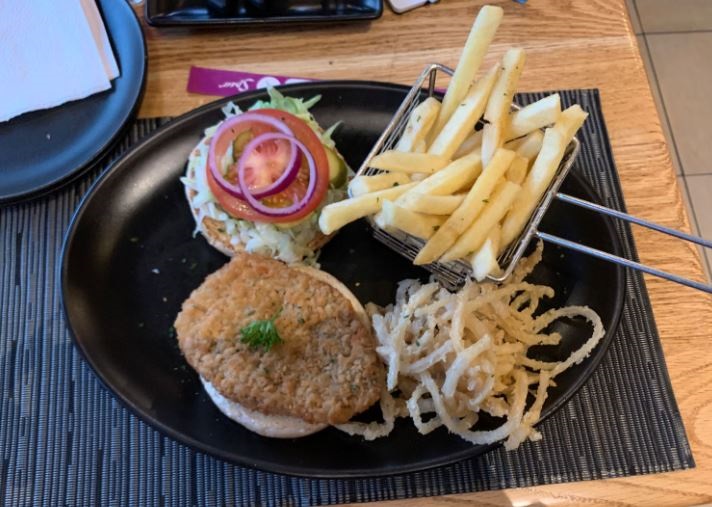 The inside is rather dark – due to the plant-based ingredients that goes into making it. It is also thinner than Spur’s regular chicken patty.

“It definitely has the texture of a chicken patty, but the taste is far from,” said a taster.

Our other taster thought the veggie ingredients overpowered that chicken taste that was initially expected.

“The crunch is there, but the taste is different. More sauces might elevate the taste,” she said.

The two chicken style veggie fillets that make up the schnitzel are also quite convincing at first glance. They look golden and crispy on the outside, but much like the chicken patty from the Crumbed Veggie Burger, they look brown on the inside -  it does not taste like chicken. “Compared to Spur’s chicken schnitzel, there’s definitely a huge difference in taste,” said our chicken schnitzel fan. “It feels harder than the other one, and doesn’t taste like real meat. Definitely room for improvement,” she said.

In more ways than one, the Beyond Burger gave what it was supposed to give. We’ll give it a solid 10/10.

The Crumbed Veggie Burger and the Veggie Schnitzel, which both consist of the same chicken-like fillet, looked like the real thing. Crunchy and golden on the outside, but the inside was not convincing - the colour was just strange. We’ll score both meals 5/10.

We won't order that in a hurry.

Related Links
We tried the new KFC pizza at Pizza Hut – and were left with more questions than answers
I tried the TikTok trick to make a perfect baked potato in 6 minutes, and I'm still torn about it
We tried Clover’s new polony-flavoured cheese, which may revolutionise the kota
Next on Business Insider
Russian state media shows off Putin's new 'long but round' table at the Kremlin