Good news, PlayStation 4 owners — there's a gorgeous new game from Sony that's only available on your platform of choice.

Better yet: It stars your friendly neighbourhood Spider-Man! In "Spider-Man," Sony has a gorgeous, charming, thrilling new game. I've been playing the new game for the past week, and have near-universally positive things to say about it.

Whether you like "Spider-Man" (the character) or not, there's something for everyone in the new "Spider-Man" game. Check it out:

"Spider-Man" is set in a stunning re-creation of New York City's borough of Manhattan. The version of Manhattan that "Spider-Man" lives in is almost as beautiful as the real thing. It's not quite as large, or as detailed, but it's got all the familiar landmarks you'd expect to see: Union Square, Central Park, and much more.

As a NYC resident, I found it shockingly easy to navigate the Manhattan of "Spider-man" without using the in-game map — while it's not a perfect re-creation of America's best city (I'm admittedly biased), it's a damn good one.

That it's possible to navigate solely based on my knowledge of the actual Manhattan is incredibly impressive, and a testament to the level of detail in "Spider-Man."

The biggest difference in Spider-Man's Manhattan is that the police are seemingly incapable of stopping near-constant terrorism. In Spider-Man's Manhattan, heavily armed militias are a shockingly normal thing to see. That's largely due to the presence of supervillains like Wilson "Kingpin" Fisk (among others, who I won't spoil here).

We're talking about a superhero game here, so it's no huge surprise that the city is rife with bad guys to beat up as Spider-Man. That's the whole game — beating up bad dudes and slingin' webs!

That said, it's a little disconcerting that the police are so dependent on Spidey.

It's insanely fun to just swing around Manhattan. Spider-Man deals in non-lethal attacks, just like Batman. It's a violent game, but it's not very graphically violent.
Sony/Marvel

It's hard to overstate how much fun basic movement is in "Spider-Man."

After over 20 hours with the game across the past week, I've yet to tire of high-velocity traversal. If you've seen any of the "Spider-Man" movies, you're already familiar with how swinging around Manhattan works — it's nearly identical in the PS4 game, but you're in control.  Spidey can run up buildings, dart forward through the air, and — of course — shoot lengthy lines of web that he can swing from. Manhattan feels like a giant playground that Spider-Man gets to play in.

Since he's Spider-Man, there's no negative impact from falling hundreds of metres to the ground, or from smashing into a building at full speed while swinging. In every possible instance, Spider-Man turns impediments into opportunities for more fluid movement.

"Spider-Man" is a third-person action game, along the lines of "Assassin's Creed" or the "Batman: Arkham" series. This side mission, named "Internet Famous," was a particular standout.
Sony/Marvel

Spider-Man does two main things: Sling webs and punch bad guys. Given that, it's no surprise that much of this game is spent doing exactly those two things.

The good news is that beating up the bad guys is nearly as much fun as swinging all over Manhattan island. Like the "Batman: Arkham" series before it, "Spider-Man" employs a kind of rhythm-based fighting system.  Using a combination of various webs, gadgets, and limbs, Spider-Man leaps around while pulverising. If you can time evasions just right, you're rewarded with a temporarily incapacitated enemy and a continued flow of punches and kicks.

Better still: As I progressed through the game, I unlocked more and more stuff to make combat and traversal all the more complex. By 10 hours in, the fights I was having looked nearly as choreographed and impressive as the fights in "Spider-Man" films.

The world of "Spider-Man" is full of stuff to do — it's hard to get bored in Spidey's Manhattan. That double vision gets the best of me.
Sony/Marvel

"Spider-Man" is an open-world game, along the lines of "Grand Theft Auto." Right from the start, you can go anywhere you want in Manhattan — don't try fleeing to Brooklyn or Queens, as the game will force you to reverse course.

But that's okay because, like in real life, there's a ton of stuff to do in Manhattan.

There are myriad side missions to tackle, challenges to complete, and puzzles to solve. Tired of taking on the game's main story? Go catch some pigeons! Or defuse a bunch of bombs! Or help the clearly overwhelmed police force deal with various violent crimes, from kidnapping to narcotics sales!

If you're interested in "Spider-Man" already, this is definitely a game for you — but even if you don't care about "Spider-Man," it's an excellent game. 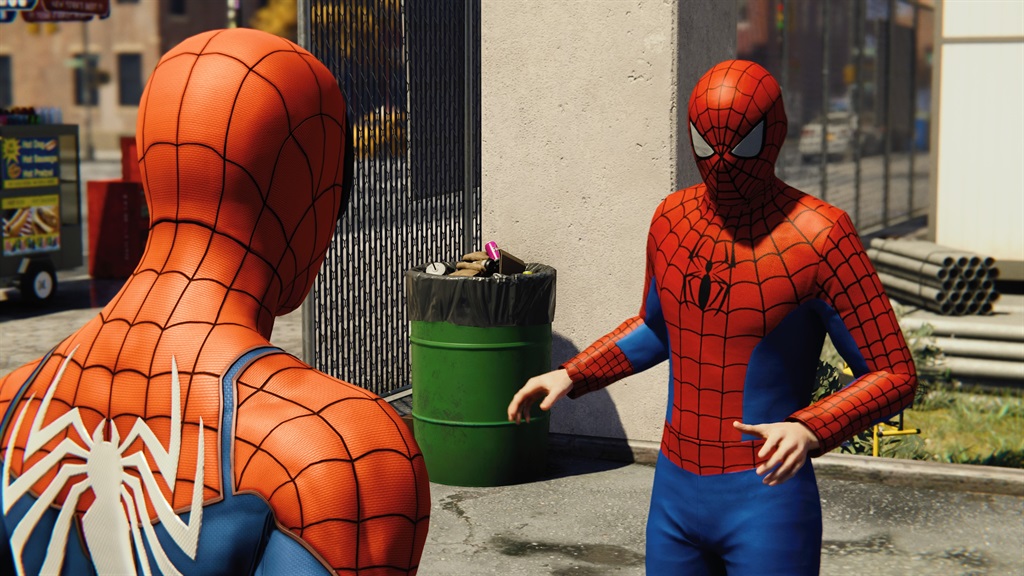 The world-famous New York City subway system can be used as a fast-travel system in "Spider-Man," which results in these excellent loading screens.
Marvel/Sony

I'm just gonna admit it: I don't like Spider-Man, the character, very much. It's a personal thing.

It's not just this game. I don't read "Spider-Man" comics, and I don't watch the movies. His style is rooted in snark, and that rubs me [up] the wrong way.

I only say that because, despite all of that, I really love the "Spider-Man" game.

Regardless of its main character and the franchise's long history in pop culture, the "Spider-Man" game is outrageously fun as a game. You don't need to know who Kingpin is, or why he matters, to enjoy this game. You don't need to know Spider-Man's origin story, or get all the little references to various other superheroes and supervillains, to enjoy this game.

If you like good games, you'll probably like "Spider-Man." It's hard to imagine a much more ringing endorsement. If you own a PlayStation 4, you should buy and play this game. It's really good!

If you live in New York City, or love Manhattan and visit often, "Spider-Man" feels especially personal. For better and worse. I've experienced some pretty intense personal feelings while playing "Spider-Man," and it's all due to the fact that I'm a New Yorker. I've lived here for 10 years now, and I grew up in the suburbs outside of NYC.

As such, swinging through virtual places that I've spent considerable personal time in ... it's super intense is what it is. Not to put too fine a point on it, but climbing the new World Trade Centre as Spidey is emotional. Like so many people of my generation — a millennial on the older side of the spectrum — I have a vivid memory of the September 11 terrorist attack. It's the defining event of my generation. Moreover: Business Insider's office is right next to the new building, so it's an area I'm intimately familiar with.

Outside of a few minor nitpicks, "Spider-Man" is a game that I universally suggest to anyone with a PlayStation 4. See it in action right here: