The spider devouring a possum was posted in the Facebook group Tasmanian Insects and Spiders.
Justine Latton/Facebook

A photo of a giant spider eating a small possum has gone viral, inducing nightmares all around the world.

And while huntsman spiders are venomous, they are not considered to be dangerous to humans and their diet consists mainly of insects and other invertebrates, and occasionally small lizards.

The photo first surfaced on Saturday on a Facebook group called Tasmanian Insects and Spiders, and was posted by a woman named Justine Latton. 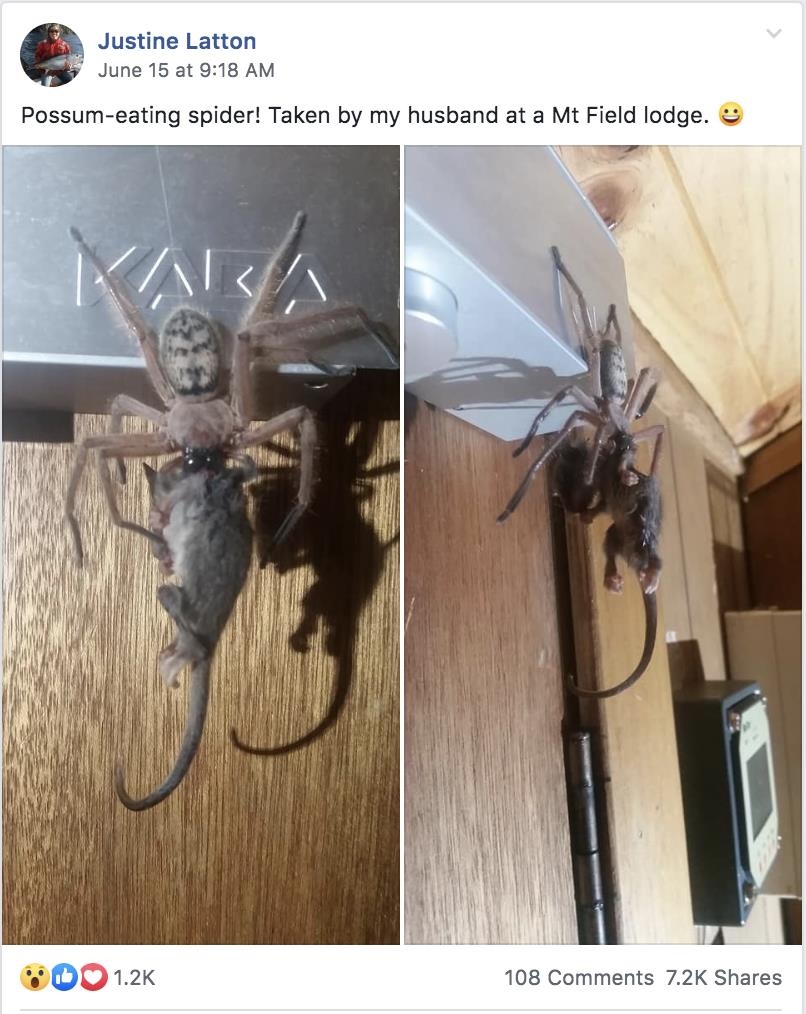 Latton told INSIDER that the photo was taken by her husband Adam a few weeks ago when he and some friends were staying at a ski lodge in Mount Field, Tasmania, located about 55 miles (90 kilometers) northwest of the capital Hobart.

"It was one of the biggest huntsman spiders he'd ever seen," she said, likening its size to "an adult's palm".

The most disturbing part of the photo is the huntsman's catch of the day - a pygmy possum, a type of small marsupial endemic to Australia and other parts of Asia Pacific.

And while pygmy possums are not usually a huntsman's snack of choice, Latton says the spider may have just seen an opportunity too good to pass up.

"Pygmy possums are quite common up there, we reckon the spider probably just saw an opportunity and went for it," she said, adding that it was about the size of a large walnut.

Latton said her husband and friends caught the spider and its prey and released it outdoors.

"No spiders were harmed in the relocation effort," she said.

Latton said that she was surprised by the response to her photo, which garnered over 7,200 shares on Facebook by Wednesday local time.

"I didn't imagine it would cause such a media maelstrom," she said.

And while Latton acknowledged that some travelers might be put off by the photo, she told INSIDER that the photo captured a "very rare occurrence" and encouraged people to visit Tasmania.

"Tassie is gorgeous!" she said, though I'm still not convinced.