SpaceX's Starship prototype serial no. 8, or SN8, falls toward a remote camera shortly after launching from Boca Chica, Texas, on December 9, 2020. The 16-story vehicle belly flopped, flipped upright, and then exploded upon landed.
SpaceX via Twitter

When SpaceX, the company founded by Elon Musk, launched an experimental Starship rocket into the skies above southeastern Texas on Wednesday, the rocket company streamed stunning live video of the feat to the world.

But some of the best footage was yet to come.

Shortly after the rocket landed - and catastrophically exploded, which was not unexpected - Musk's aerospace company posted an out-of-this-world view of the incoming, doomed 16-story prototype.

The rocket, called Starship serial no. 8, or SN8, took off at 4:45 p.m. CT and soared tens of thousands of metres into the air. Near the apogee of its 6 minute and 42 second flight, which SpaceX planned to be about 12.5 kilometers, the steel-bodied ship began shutting down its three Raptor engines, one by one.

SN8 then tipped its nosecone forward with small thrusters to fall through the atmosphere with a skydiver-like belly flop - a maneuver it must perform in the future as it returns to Earth from orbit. As SN8 dropped toward its landing pad at SpaceX's rocket development facility in Boca Chica, Texas, a remotely operated tracking camera recorded upward-looking video.

SpaceX posted a striking 35-second clip from the camera to Twitter a couple of hours after the flight ended.

The video shows a zoomed-in view of SN8's belly as the vehicle plunges toward the ground. Canards on the nosecone and wing flaps on the base of the rocket are shown moving SN8 to steer it toward its target: a concrete landing pad near Boca Chica Beach, which SpaceX had cleared of all people for kilometres around.

Three plumes of gases - made by boiling liquid oxygen, one of SN8's propellants - billow out of the ship's base as two Raptor engines fire and move to turn the ship upright. As SN8 falls, the robotic tracking camera zooms out as it keeps the vehicle in view.

Moments before the landing attempt, one of the engines cuts out and begins spewing green flames: part of the torch system designed to ignited methane and oxygen spewing out of the engines. But the reignition doesn't work, which spaceflight commentators speculated was the result of an internal fuel tank losing adequate pressure to rapidly force fuel through the engines.

Whatever the cause, SN8 comes in too fast, and the tracking camera captures the vehicle's final moments as its base crunches into the ground, ruptures its fuel tanks, and triggers a massive explosion.

"A lot of people put a TON of work in to those Starship tracking cams," Jami Higginbotham, SpaceX's principal video engineer, tweeted after the flight.

Despite the failed landing, SpaceX and Musk were thrilled with the results of the experimental flight - one that took Starship into bold new territory as a launch vehicle.

"AWESOME TEST. CONGRATS STARSHIP TEAM!" the company wrote in text while showing wreckage of the vehicle.

"Successful ascent, switchover to header tanks & precise flap control to landing point!" Musk tweetedafter the flight concluded. "SN8 did great! Even reaching apogee would've been great, so controlling all way to putting the crater in the right spot was epic!!" 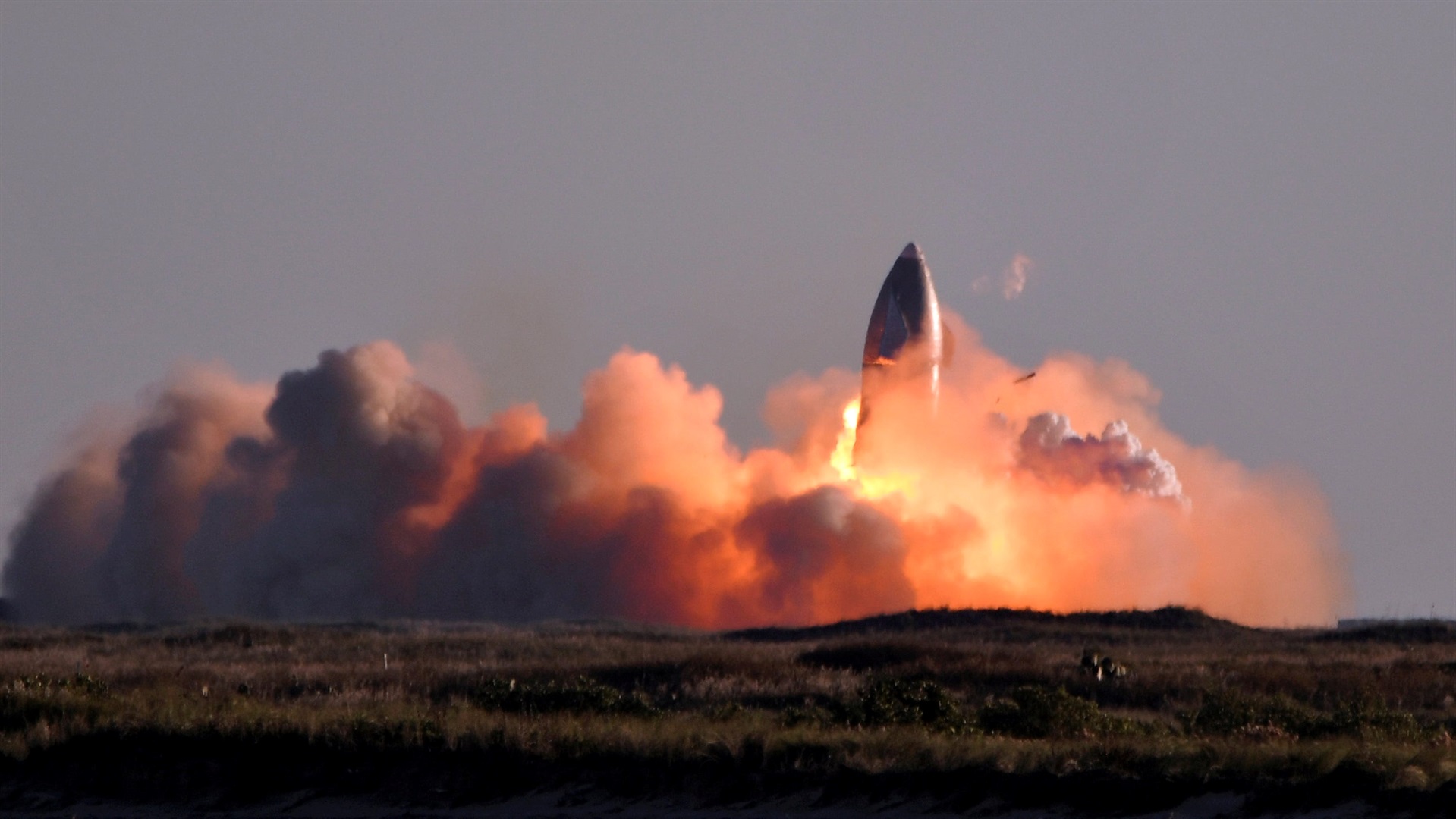 SpaceX plans to launch additional prototypes to further develop Starship. One, called SN9, is already built and waiting in a facility down the road from the launch site, and SpaceX may roll it out for flight in a matter of days or weeks.

Before SN8's first and final flight, SpaceX flew a Starhopper prototype to about 150 metres in 2019 and launched a larger SN5 prototype to a similar altitude in August, as well as an SN6 prototype in September. Those launches helped SpaceX test the system's giant Raptor rocket engines and landing capability.

The company hopes to eventually fly a 23-story rocket booster called Super Heavy, which may have more than two dozen car-sized Raptor engines in its final configuration. The behemoth lower stage is designed help propel a Starship spaceship toward orbit.

Together, Musk has said, the Starship-Super Heavy launch system will be fully and rapidly reusable, helping slash the cost of reaching space by a thousandfold.

SpaceX hopes to ultimately leave behind suborbital launch attempts and try rocketing Starships to orbit from Boca Chica. But the company faces a new environmental analysis with the Federal Aviation Administration. Depending on how that process plays out, SpaceX may see a delay to orbit from a few months to a few years.

An illustration of SpaceX's Starship spaceship and Super Heavy rocket booster launching together from a pad near Boca Chica Beach, South Texas..
SpaceX

If Musk's vision for the Starship system plays out, the ship may one day fly NASA astronauts to the moon and cart humans to Mars en masse to build an independent Martian city. Meanwhile, back on Earth, the system could power round-the-world hypersonic travel.

In an interview with Mathias Döpfner, the CEO of the German publishing house Axel Springer (which owns Insider Inc.), Musk said SpaceX hoped to land a crewed mission on Mars in 2026, Business Insider's Kate Duffy reported.

"If we get lucky, maybe four years," Musk said. "We want to send an uncrewed vehicle there in two years."