Musk was waiting for SpaceX's 21st (and record-breaking) rocket launch of the year on Saturday when he revealed that construction of a prototype for a Mars spaceship, called Starship, is now underway at the company's Texas launch site.

What's more, the first round of experimental launches of what Musk called the "test hopper" may be complete by early spring.

Musk and Gwynne Shotwell, the president and COO of SpaceX, have both said short, non-orbit-reaching launches or "hops" of such a spaceship prototype is a critical step toward building the Big Falcon Rocket, or BFR: a colossal two-stage system designed to launch 100 people and 150 tons of cargo to the surface of Mars.

However, both SpaceX executives said recently that short hops wouldn't commence until the end of 2019. So perhaps a little ingenuity - and an influx of half a billion dollars - has helped speed up that timeline.

Starship is designed to be about 9 metres wide and 55 metres tall, and sit atop a roughly 67-metre-tall rocket booster that Musk now calls Super Heavy.

"I will do a full technical presentation of Starship after the test vehicle we're building in Texas flies, so hopefully March/April," he tweeted on Saturday.

"This test hopper is at full body diameter of 9m / 30 ft, just not full height. Super Heavy will be full height & diameter," Musk added, indicating that SpaceX won't build a squat version of Super Heavy - and will skip straight to launching a full-scale booster.

Musk added that construction of test hopper segments was underway at SpaceX's temporary new rocket factory at the Port of Los Angeles.

In Boca Chica, Texas, where the company is developing a launch site for BFR, locals have already photographed what look like parts of the test hopper arriving on site and being assembled.

The image below is an illustration that mocks up recent photos of what appear to be test hopper parts against illustrations of Starship.

However, SpaceX did not immediately respond to Business Insider's questions about the Starship test hopper's launch schedule and other details (and the images are not confirmed to show the hopper).

News of the test hopper and launch schedule wasn't the only thing that Musk revealed on Saturday, though.

Toward the first Mars landings in 2025?

Musk began spilling information about SpaceX's activities over a discussion of metallurgy, or properties and science of metals, for the BFR.

Materials are critical to the success or failure of space vehicles because they must withstand enormous temperature swings, pressure changes, and extreme vibration. This is especially true of Starship, which is supposed to launch into orbit around Earth, take a months-long voyage to Mars, land on the red planet's surface, and launch back home.

Musk presented what he said was a "final iteration" of BFR in September. At the same time, he announced that his company would be launching Japanese billionaire Yusaku Maezawa around the moon in 2023. The design Musk described was rich with carbon-fiber composite parts. 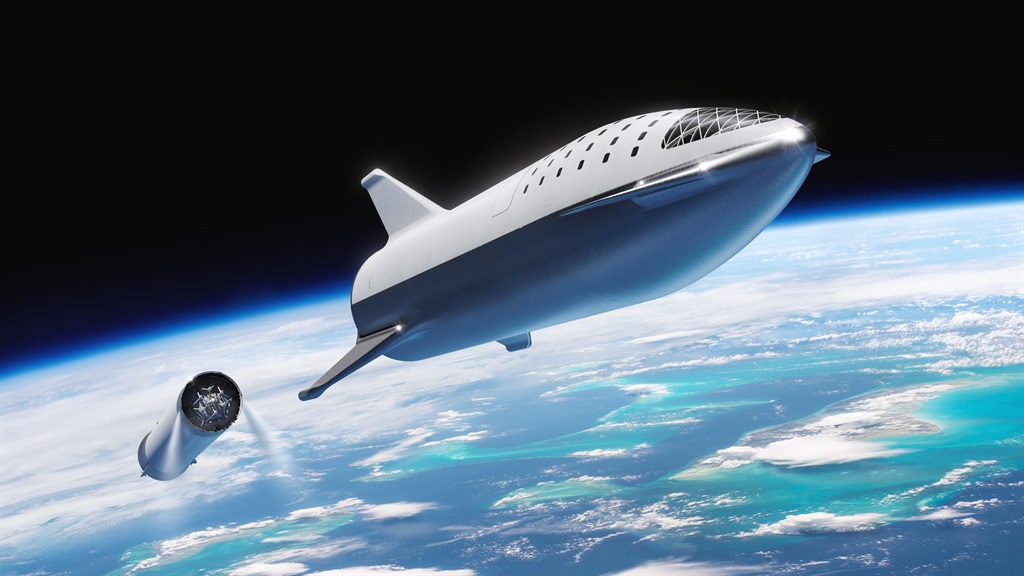 An illustration of the SpaceX's Big Falcon Rocket, or BFR, launching into space. Here, the spaceship is shown detaching from the booster.
SpaceX

But by November, Musk had steamrolled that statement, saying radical design changes were coming; he even renamed the BFR system's two main parts. (Starship used to be called "Big Falcon Spaceship" and Super Heavy the "Big Falcon Booster.") In December, Teslarati reported that SpaceX was working with NASA to develop a new type of heat shield for Starship.

And on Saturday, Musk revealed that SpaceX developed a special stainless steel alloy for its BFR system.

It's uncertain if SpaceX will now meet its ambitious Mars-launch timeline due to these changes. But as late as Oct. 31, Musk said he hopes to use the BFR system to launch the first humans toward the Martian surface in six years' time.

"We're still aiming for 2024," Musk said of such a mission during an interview with journalist Kara Swisher for the podcast Recode Decode.

Related Links
Watch NASA scientists freak out after landing a probe on Mars for the first time in 6 years
Elon Musk and SpaceX shared new images of the rocket ship designed to colonise Mars — and the...
This drawing liked by Elon Musk reveals just how crazy SpaceX's first missions to Mars will be
Next on Business Insider
Govt says it plans to yank registration for Damelin, Lyceum, City Varsity, and ICESA