May 4 is International Space Day: the world's small homage to and celebration of the final frontier.

But that frontier is wildly inaccessible, and downright deadly, to any plucky human without a good spacesuit.

For nearly six decades, NASA and private companies have met the call to protect high-flying astronauts as they risk their lives in the name of space exploration.

From the silvery suits of the 1950s and 1960s Mercury programme to future commercial and government designs, here's how astronauts' spacesuits have evolved over six decades.

If all goes well, the next generation of spacesuits just might revolutionise human exploration of other worlds. Project Mercury marked the first time US citizens ventured into orbit around Earth.

To protect the first astronauts from sudden pressure loss, NASA modified high-altitude jet-aircraft pressure suits from the US Navy. Each spacesuit had a layer of neoprene-coated nylon on the inside and aluminised nylon on the outside (to keep the suit's inner temperature as stable as possible).

Six astronauts flew into space wearing the suit before NASA retired it from service. Gemini was NASA's second space programme — and one with more ambitious goals. The Gemini capsule carried a two-astronaut crew into space, and had one (uncomfortable) mission that lasted two weeks. The David Clark Company designed Gemini suits to be flexible when pressurised, and took extra steps to make them more comfortable than Mercury suits. For example, they could be connected to a portable air conditioner to keep the astronauts cool until they could hook up to the spacecraft's lines. One type of Gemini suit, called G4C, was designed with NASA's first spacewalks in mind. Astronauts would open the hatch during these ventures and leave the safety of their vehicle to work in the vacuum of space. To withstand the harsh space environment, the suit connected the astronauts to the spacecraft via a hose, which supplied them with oxygen. In case there was a problem, though, some variants of the suit provided up to 30 minutes of backup life support. The heaviest variant weighed about 15kg. The Apollo programme brought astronauts to the moon, and it was no walk in the park. The astronauts needed more than either the Gemini or Mercury suits could offer.

The first people to walk the moon required a shield against fine regolith (dust as sharp as glass); protection from wild temperature swings from sun to shade; the flexibility to install gear and pick up moon rocks; and the ability to last for hours away from a spacecraft.

The suit came with a dozen layers of fabric, thick boots, and a robust life-support system. Each weighed more than 80kg on Earth, but just one-sixth as much in the moon's weaker gravity field. A mission called STS-1 — short for Space Transportation System-1 — was the first orbital spaceflight of NASA's space shuttle programme. Columbia, the first 100-ton orbiter, carried a two-astronaut crew into space and orbited Earth 37 times before re-entering the atmosphere and gliding back to a runway. Astronauts weren't venturing outside, so they only wore an emergency ejection escape suit, which (like the Mercury suit) was a modified version of a US Air Force high-altitude pressure suit. Astronauts of the space-shuttle era would work regularly in space to maintain satellites as well as construct and maintain the International Space Station (ISS).

They needed a workhorse spacewalk suit for such tasks, so the space agency created the Extravehicular Mobility Unit. This 14-layer pressurised suit could withstand the harsh void of space and keep astronauts alive for more than eight hours. Fully loaded with gear and supplies, it could weigh nearly 145kg on Earth.

NASA also tested a jetpack-like device for the EMU, called a Manned Manoeuvring Unit, that allowed astronauts to fly around free and untethered. People on board the ISS today use an advanced version of EMUs to maintain the space station. The suit that astronauts wore during the Space Shuttle programme is sometimes called a "pumpkin suit" for its bright orange colour. The suit is equipped with gloves on disconnecting lock rings on the wrist, liquid cooling and improved ventilation, and extra layers of insulation. The sharp, blue-lined spacesuit you see many astronauts wearing today is actually a Russian suit called the Sokol or "Falcon" spacesuit. The 9.9kg suit is pretty similar to the space shuttle flight suit, though it's used to protect people who fly inside Russia's Soyuz spacecraft (which NASA pays an increasingly hefty sum to use for its own astronauts' travel to and from the space station). NASA currently pays more than $80 million per round-trip to and from the International Space Station. But it's hoping to lower costs by investing in US commercial companies to provide a "space taxi" service.

One of those companies is Elon Musk's SpaceX, which designed a slick new spacesuit to protect astronauts who will fly aboard its Crew Dragon spacecraft to the ISS (and perhaps around the moon).

"It took us three years ... to make a spacesuit that looks good and works," Musk said in February 2018. Musk already flew a dummy toward Mars in one of the suits, but hopes to fly the first people inside them before the end of 2018. Boeing is the second company NASA is paying for space taxi services. Its 5kg, bright blue suit is designed for the CST-100 Starliner spacecraft and is full of features to make it comfortable and mobile under pressure. That includes a helmet attached with a thick, air-tight zipper (no heavy or bulky neck ring required). Boeing hopes to fly its first astronauts in October 2018 and certify its whole system for regular use by January 2019. 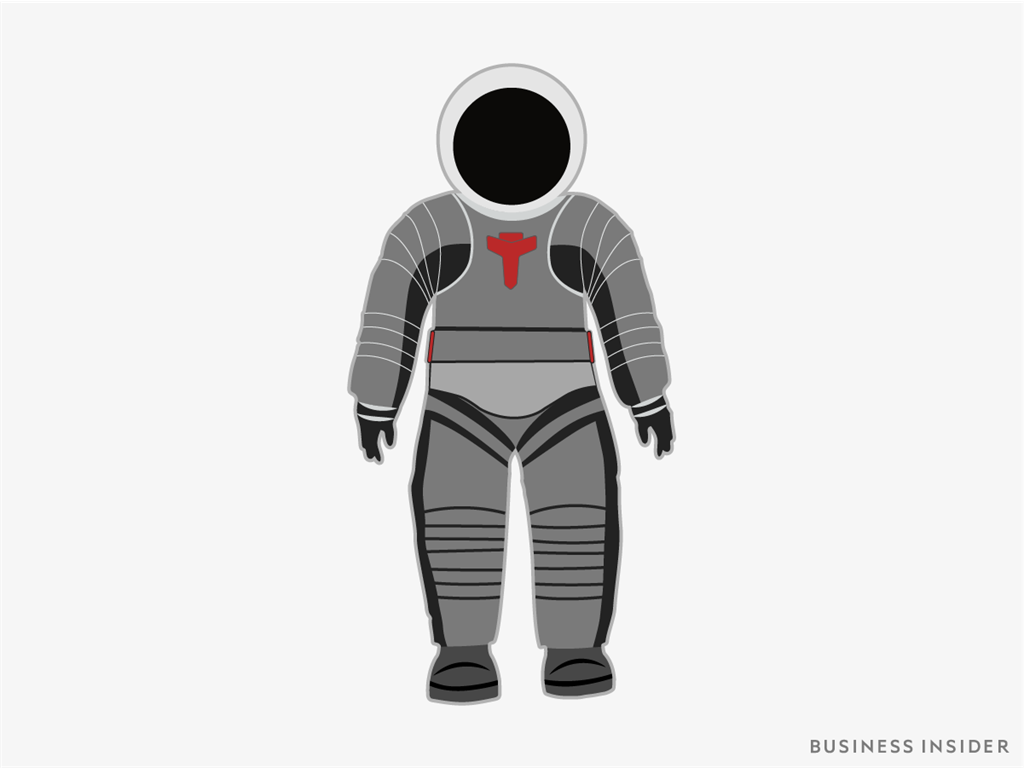 As NASA continues to push the boundaries of human space exploration — it hopes to reach Mars in the 2030s — it needs to develop even more advanced suits to be worn both inside and outside of spacecraft.

The Z-2 suit is the space agency's lightweight, high-durability design for working on the moon or Mars. In it astronauts could explore, collect samples, and manoeuvre in and out of habitats and rovers, and fairly easily take it on and off.

"Adjustable shoulder and waist sizing features maximise the range of crew sizes who can fit into any single suit," NASA said. Planets aren't the only place astronauts may venture: One plan championed by Lockheed Martin has people landing on Phobos, a small Martian moon. Its gravitational pull is less than a fraction of a percent of Earth's, though, so "landing" is relative.

To grab onto Phobos — which may harbour a lot of ice that could be turned into rocket fuel — Lockheed Martin has proposed the spider flyer-walker: an eight-legged, rocket-powered spacesuit that can crawl, walk, or hop across the surface.

NASA has yet to incorporate the suit into its plans, but it's a good representation of how spacesuits may continue to evolve to meet the intense needs of space exploration in the future.