Paradise, California, before and after the deadly Camp Fire.
Satellite image ©2019 Maxar Technologies

The world looks considerably different today than it did 10 years ago.

Over the past decade, around 7 million acres of land has been destroyed annually by wildfires. A spate of devastating hurricanes in 2017 toppled buildings and flooded roads in many coastal areas. And the war against ISIS flattened entire cities in the Middle East.

At the same time, new tech campuses and military bases have sprouted up across the Earth's surface.

These transformations were captured by satellite imagery from Maxar Technologies, which monitored the view from space between 2010 and 2019. Their striking before-and-after photos depict the most significant global events of the past decade.

The Deepwater Horizon oil spill discharged around 4.9 million barrels of petroleum into the Gulf of Mexico in 2010. On the evening of April 20, 2010, the Deepwater Horizon drilling rig exploded in the Gulf of Mexico, killing 11 workers onboard. The rig was stationed in the Macondo Prospect, a site owned by the multinational oil and gas company BP.

The oil spill lasted for 87 days. Satellite images show that it spread across 68,000 square miles of ocean. 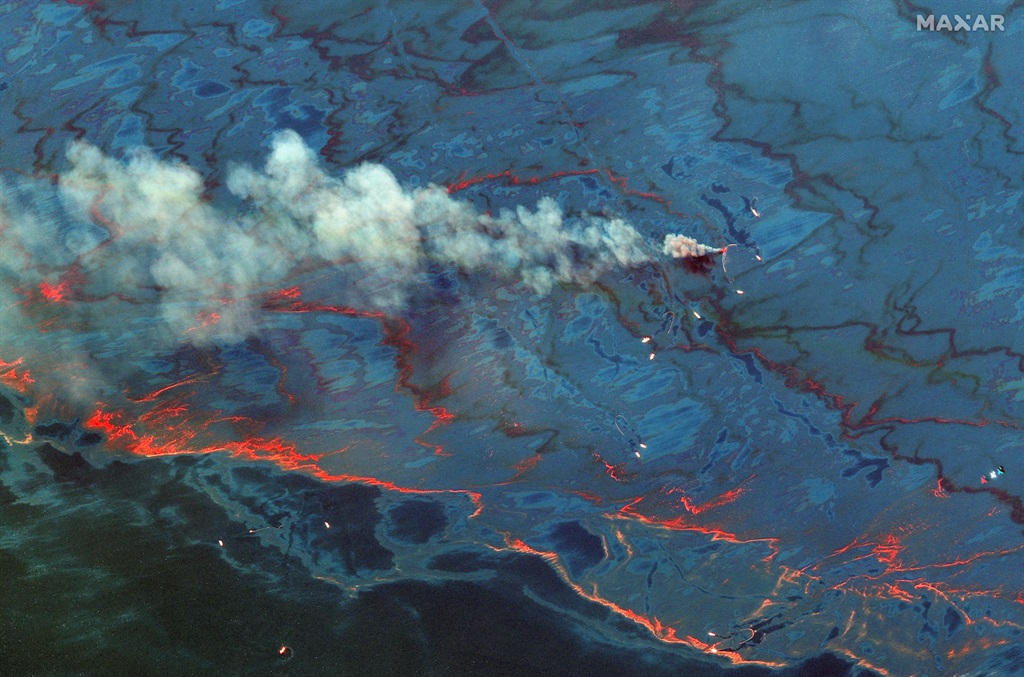 That included 11 counts of felony manslaughter.

The Tohoku earthquake and tsunami on March 11, 2011, resulted in three nuclear meltdowns and multiple hydrogen explosions at the Fukushima Daiichi Nuclear Power Plant in Japan. 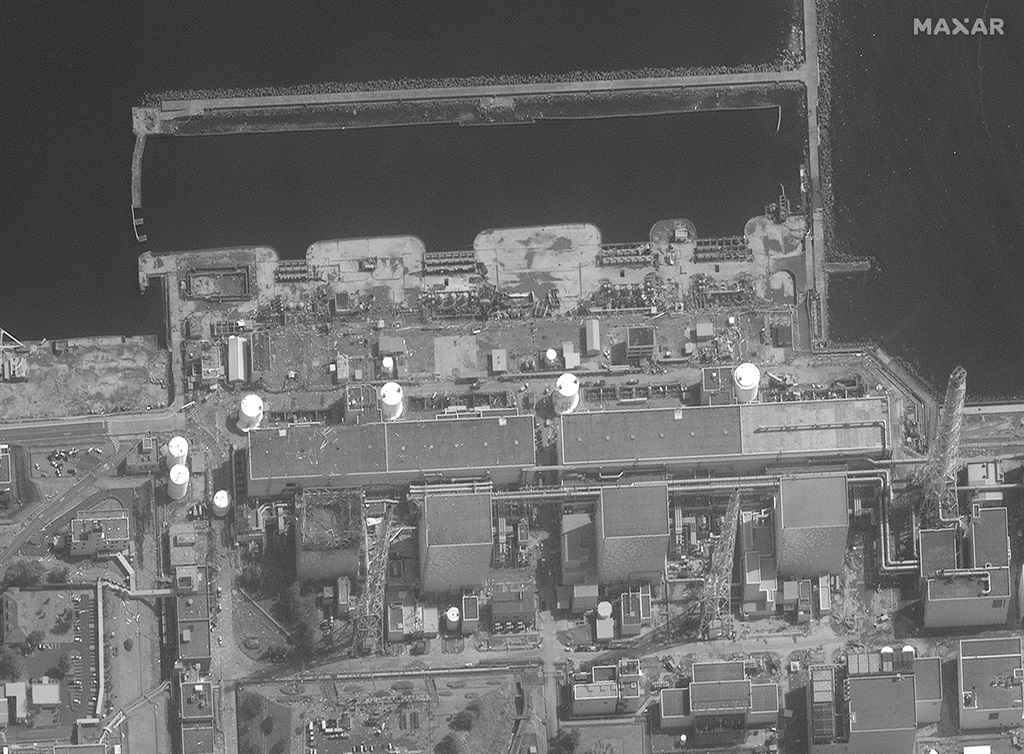 In all of history, only two events have been designated "level 7" nuclear accidents, the classification used by the International Atomic Energy Agency (IAEA) for major events with widespread health and environmental effects. Fukushima was one of them.

The disaster is considered the second-worst nuclear accident in history, behind the 1986 Chernobyl disaster. The event didn't directly kill anyone, but it did result in about 1,600 stress-related deaths (mostly elderly citizens). It also released radioactive material into the Pacific Ocean.

Most of the region's more than 200,000 evacuees have been allowed back. But many have chosen not to return.

China began constructing its most advanced air base, Fiery Cross Reef, in 2014.

In China's aggressive push to dominate the land, sea, and air in its southern regions, the nation embarked on a grand project to turn Fiery Cross Reef into a 677-acre island in 2014.

Though the land claim is fiercely disputed by the international community, the Chinese Foreign Ministry said it's "within the scope of China's sovereignty." Officials have also said that China's reclamation activity at Fiery Cross and other reefs is "is fair, reasonable, lawful, it does not affect and is not targeted against any country."

But the artificial island - despite hosting an airplane runway, harbor, basketball courts, and even a farm - is also home to a military garrison equipped with rocket launchers. US and other non-Chinese officials have said the militarized artificial islands can escalate tensions in the South China Sea and lead to unnecessary armed conflicts in the future.

In 2006, Steve Jobs was envisioning a bright future for Apple - the first iPhone was about to debut, and plans were in the works for an "Apple Campus 2."

Though Jobs never lived to see the site's construction, he presented its design to the Cupertino city council in June 2011. The council approved the construction in 2013, and by mid-2014 the project was fully underway.

The final building, sometimes called "The Spaceship," opened to employees in 2017. It's more than a quarter-mile long, larger in footprint than the Pentagon in Washington, DC. The structure floats on hundreds of steel saucers to insulate it from earthquakes.

But only a nearby visitor center is open to the public.

"The problem with opening up the main facility for tours is we have so much confidential stuff around," Apple's CEO Tim Cook told company shareholders in 2018.

Harvey hit Texas and Louisiana as a Category 4 storm in August 2017. Before that, no major hurricane had made landfall in the US in 12 years.

By the time the hurricane dissipated on September 2, 2017, it had claimed 68 lives.

Most of these deaths were caused by flooding. Another 35 people perished from the indirect effects of the storm, such as car crashes and issues getting medical help.

By the time the storm made landfall in the Florida Keys on September 10, 2017, Irma was the most intense hurricane to strike the continental United States since Hurricane Katrina in 2005.

The storm generated more wind energy than the entire 2013 or 2015 hurricane seasons. In total, it caused at least 134 deaths and $78 billion worth of damage.

Two weeks after Irma, Puerto Rico and the US Virgin Islands were torn apart by Hurricane Maria.

Hurricane Maria was the 10th most intense Atlantic hurricane on record. It knocked out around 80% of Puerto Rico's electrical grid, prompting an 11-month operation to restore power.

A year after the hurricane struck, Puerto Rico revised the official death toll to 3,059, making Maria the deadliest storm of the 2017 Atlantic hurricane season.

In southeast Asia meanwhile, the army of Myanmar (a Buddhist-majority country) violently attacked and killed thousands of Muslim Rohingyas starting in 2017.

Some world leaders have called Myanmar's actions genocidal, given the expansive yet targeted assault on the Rohingya ethnic minority. Village by village, members of the Burmese military allegedly attacked, raped, and killed Rohingya people.

In villages like Inn Din, from which Rohingya families fled to neighboring countries like Bangladesh, locals razed scores of empty homes and built new structures.

A joint offensive to wrest Mosul from ISIS control destroyed most of the Old City in 2017.

The city was one of the last Iraqi strongholds of the terrorist militant group, which seized the region in June 2014. Starting in late 2016, a diverse coalition made of Iraqi, Kurdish, and international forces began what would become a roughly nine-month offensive to retake Mosul.

Though the assault was successful, missiles and bombs leveled large patches of the city and fighting killed scores of civilians.

The most destructive wildfire in California history, the Camp Fire, blazed through the town of Paradise in November 2018.

The fire forced more than 250,000 people to evacuate their homes in northern California. It destroyed more than 18,800 structures and 240 square miles of land - including the town of Paradise, which was almost completely incinerated.

The final death count was 85, making it the sixth-deadliest fire in US history. During his last years of life, Abu Bakr al-Baghdadi rose to prominence as the leader of ISIS. He enslaved thousands of people and took over an area the size of Great Britain. But in February 2018, intelligence officials got a break that led to the discovery of his compound in Syria.

A force of US Army Rangers and Delta Force operators attacked the compound on October 27, 2019.

Bombs and missiles destroyed some buildings, but al Baghdadi retreated to an underground tunnel. Inside, he detonated an explosive vest. He killed himself and two of his children.