The astronauts on board have since found and fixed the source of the leak: a hole about 2 millimeters wide in the Soyuz spacecraft attached to the Russian part of the space station.

NASA said in a press release that the six-person crew were never in danger, and that the cabin pressure is now holding steady.

"Flight controllers in Houston are continuing to monitor station’s cabin pressure in the wake of the repair," NASA said.

No one has officially named the cause of the leak, but one culprit could be a tiny piece of space junk. The US government tracks about 23,000 human-made objects floating in space that are larger than a softball. These satellites and chunks of debris zip around the planet at more than 28,00km per hour — roughly 10 times the speed of a bullet. Until April 1, the list of space junk even included China's bus-size Tiangong-1 space station, which burned up in Earth's atmosphere.

However, there are millions of smaller pieces of space junk — sometimes called micrometeoroids — orbiting Earth, too."There's lots of smaller stuff we can see but can't put an orbit, a track on it," Jesse Gossner, an orbital-mechanics engineer who teaches at the US Air Force's Advanced Space Operations School, told Business Insider.As companies and government agencies launch more spacecraft, concerns are growing about the likelihood of a "Kessler syndrome" event: a cascading series of orbital collisions that may curtail human access to space for hundreds of years.Here's who is keeping tracking of space junk, how satellite collisions are avoided, and what is being done to prevent disaster on the final frontier.

Thousands of launches since the dawn of the Space Race have led to a growing field of space debris. Most space junk is found in two zones: low-Earth orbit, which is about 400km up, and geostationary orbit, about 36,000km up. 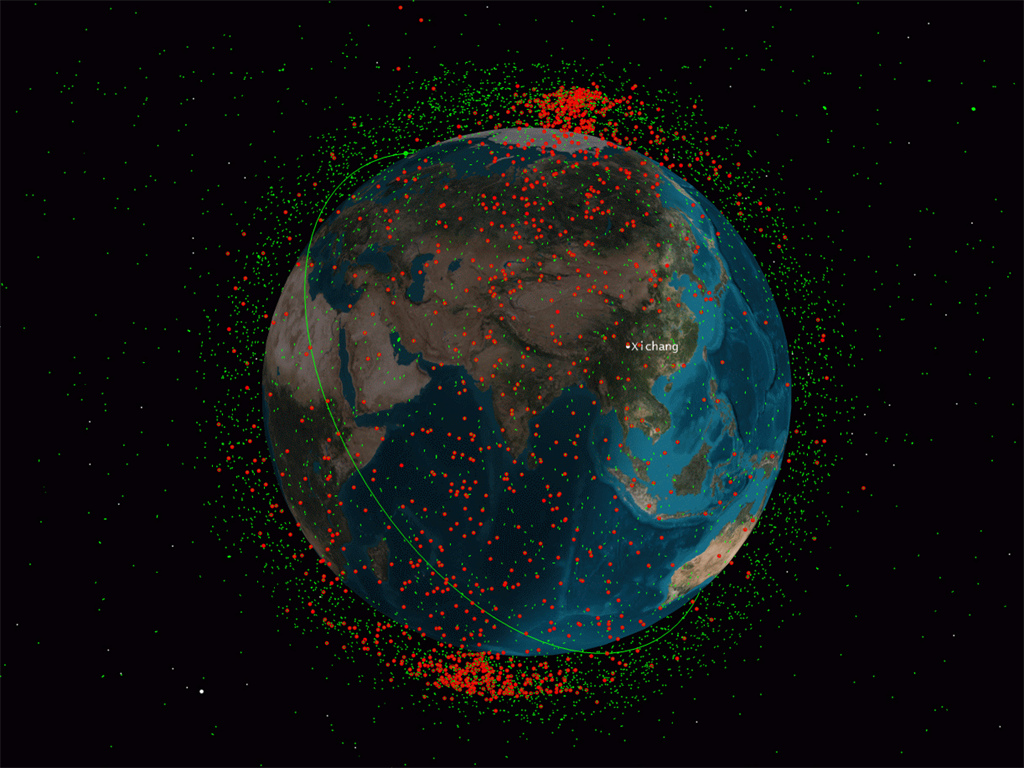 In addition to 23,000 objects the size of a tennis ball or larger — like rocket stages, satellites, and even old spacesuits — there are more than 650,000 objects that are tennis ball-to-fingernail-size.

Another 170 million bits of debris as small as a pencil tip may also exist — including things like explosive bolts and paint flecks. Source: ESA

Countless pieces of tiny debris were added to orbit in 2007, when China intentionally smashed one of its old satellites with a "kill vehicle." Then in 2009, an old Russian satellite and US satellite collided, adding even more dangerous junk.

Leftover rocket bodies often have fuel remaining. As the harsh environment of space weakens the rocket parts over time, fuels can mix, explode, and spray more debris every which way.

No piece of space debris is insignificant, since each one travels at speeds high enough to inflict catastrophic damage to vital equipment. A single small hit could be deadly to astronauts aboard a spacecraft. A space-debris hit to space shuttle Endeavour’s radiator found after one of its missions. The entry hole is about 0.6cm wide, and the exit hole is twice as large. ESA

Jack Bacon, a senior scientist at NASA in 2010, told Wired that a hit by a 10-centimeter sphere of aluminum would be akin to detonating 7 kilograms of TNT.

If the space junk problem were to spiral out of control, one collision could beget other collisions, and in turn spread even more debris: a chain of crashes known as a Kessler event.

Astrophysicist Donald J. Kessler, who used to work for NASA's Johnson Space Center, penned the idea in a 1978 study. Kessler and his NASA colleague Burton G. Cour-Palais calculated that more and more launches in the coming decades would increase the risks of collisions in space.

In the study, titled "Collision Frequency of Artificial Satellites: The Creation of a Debris Belt," they also described important sources of space debris and possible sinks that'd remove dangerous junk from orbit.

As Kessler's study explains, the more massive an object, the more space debris it can create if hit. Thus, large objects pose a much higher risk of fueling a cascade of collisions if there are many other satellites in similar orbits. 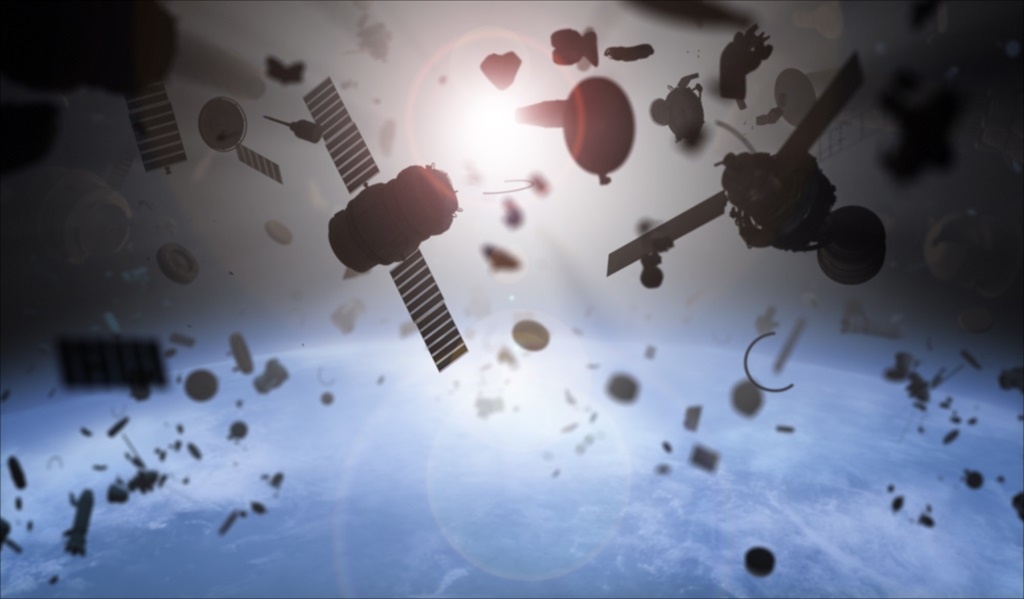 An illustration of a runaway space junk event called the Kessler syndrome. NASA

A Kessler syndrome event could create an Asteroid Belt-like field of debris in large regions of space around Earth. These zones may be too risky to fly new satellites or spaceships into for hundreds of years, severely limiting human access to the final frontier.

The Kessler syndrome plays center-stage in the movie "Gravity," in which an accidental space collision endangers a crew aboard a large space station. But Gossner said that type of a runaway space-junk catastrophe is unlikely.

"Right now I don't think we're close to that," he said. "I'm not saying we couldn't get there, and I'm not saying we don't need to be smart and manage the problem. But I don't see it ever becoming, anytime soon, an unmanageable problem."

There is no current system to remove old satellites or sweep up bits of debris in order to prevent a Kessler event. Instead, space debris is monitored from Earth, and new rules require satellites in low-Earth orbit be deorbited after 25 years so they don't wind up adding more space junk. An illustration of the e.Deorbit system to net and remove old satellites from orbit. Warner Bros./YouTube

"Our current plan is to manage the problem and not let it get that far," Gossner said. "I don't think that we're even close to needing to actively remove stuff. There's lots of research being done on that, and maybe some day that will happen, but I think that — at this point, and in my humble opinion — an unnecessary expense."

A major part of the effort to prevent a Kessler event is the Space Surveillance Network (SSN). The project, led by the US military, uses 30 different systems around the world to identify, track, and share information about objects in space.

Many objects are tracked day and night via a network of radar observatories around the globe. Optical telescopes on the ground also keep an eye out, but they aren't always run by the government. "The commercial sector is actually putting up lots and lots of telescopes," Gossner said. The government pays for their debris-tracking services.

Gossner said one major debris-tracking company is called Exoanalytic. It uses about 150 small telescopes set up around the globe to detect, track, and report space debris to the SSN.

Telescopes in space track debris, too. Far less is known about them because they're likely top-secret military satellites.

Objects detected by the government and companies get added to a catalog of space debris and checked against the orbits of other known bits of space junk. New orbits are calculated with supercomputers to see if there's a chance of any collisions.

Diana McKissock, a flight lead with the US Air Force's 18th Space Control Squadron, helps track space debris for the SSN. She said the surveillance network issues warnings to NASA, satellite companies, and other groups with spacecraft, based on two levels of emergency: basic and advanced.

The SSN issues a basic emergency report to the public three days ahead of a 1-in-10,000 chance of a collision. It then provides multiple updates per day until the risk of a collision passes.

To qualify for such reporting, a rogue object must come within a certain distance of another object. In low-Earth orbit, that distance must be less than 1 kilometer; farther out in deep space, where the precision of orbits is less reliable, the distance is less than 5 kilometers.

Advanced emergency reports help satellite providers see possible collisions much more than three days ahead. "In 2017, we provided data for 308,984 events, of which only 655 were emergency-reportable," McKissock told Business Insider in an email. Of those, 579 events were in low-Earth orbit (where it's relatively crowded with satellites).

When a space company receives a SSN alert, they typically move their satellite into a different orbit — and out of harm's way — by burning a little propellant. An illustration of a satellite damaged by space debris. Elon Musk/SpaceX via Instagram

Although companies like SpaceX are launching more and more objects into space, McKissock said "our everyday concern isn’t something as catastrophic as the Kessler syndrome."

The biggest priority is avoiding damage to multi-million-dollar satellites and keeping astronauts safe. "It's just a matter of watching and, with our active satellites that we do control, avoiding collisions," Gossner said. "It becomes a very important problem not just for that satellite, but then for the debris that it would create."

So any time something massive returns to Earth, like China's 9.4-ton Tiangong-1 space station did in April, it's a cause for celebration — not despair.

The next very large object to fall to Earth after Tiangong-1 may be NASA's 12.25-ton Hubble Space Telescope, which could be deorbited as soon as 2021.

Like other objects that can be guided toward their doom, Hubble (as well as the International Space Station, eventually) will be deorbited in the "spacecraft graveyard": the most remote point of the Pacific Ocean.