Luxury hotels could be launched into Earth's orbit as early as 2021. This is what future space lodging might look like. 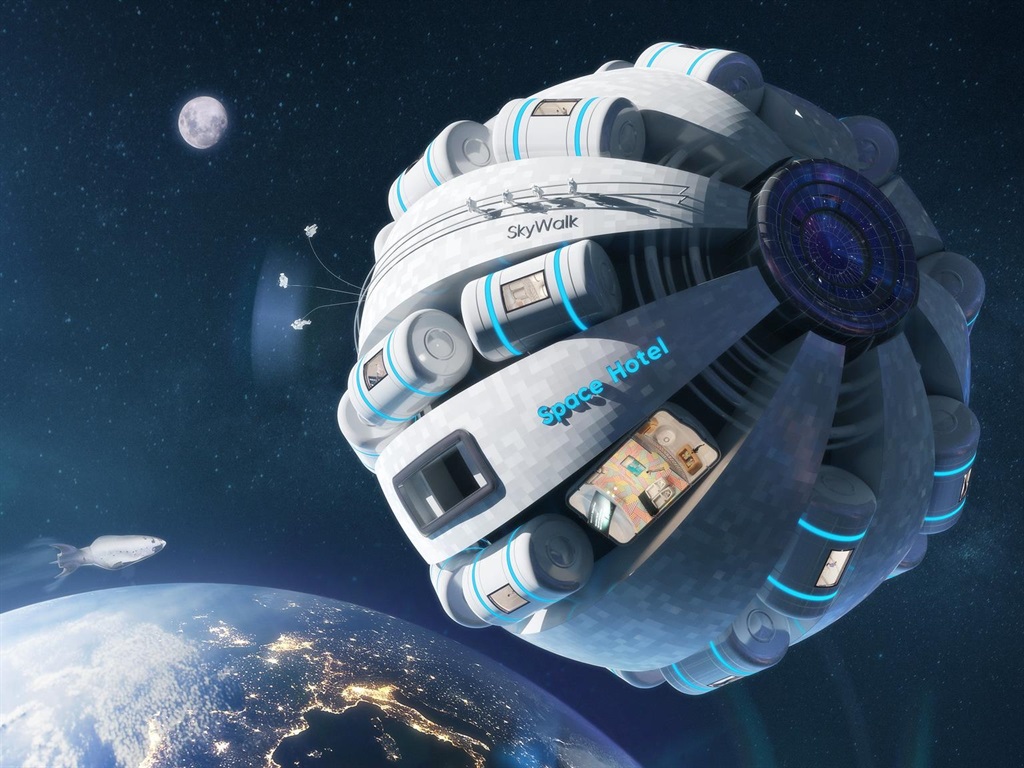 Space tourism is rapidly moving from the realm of science-fiction to reality - some developers have promised to launch hotels into Earth's orbit as early as 2021.

In September, NASA astronauts toured a life-sized prototype of an inflatable habitat that could one day house astronauts on a journey to Mars. Bigelow Aerospace, the company behind that prototype, hopes to bring tourists into space as well, and it's not alone. Some developers are already selling reservations at future space hotels.

Designs for such in-orbit lodging vary: Some involve spacious inflatable habitats, others include condominiums, and one concept even promises villas in a rotating, wheel-shaped space station equipped with artificial gravity. Space tourists could one day get an immersive astronaut experience, be wined and dined with incredible views of the Earth, or even play zero-gravity games like Quidditch.

"Eventually, going to space will just be another option people will pick for their vacation, just like going on a cruise, or going to Disney World," Tim Alatorre, an architect working on a space-hotel project called the Von Braun Space Station, told Dezeen.

A report released by Samsung in August predicted that space hotels could become available by 2069.

These hotels could orbit Earth, the moon, or other planets, generating their own gravity to make the space experience more comfortable, the authors said.

But some companies say they can do it sooner than that. In August, the Gateway Foundation announced plans to open the Von Braun Space Station, a wheel-shaped, rotating space hotel, to tourists by 2025.

The Gateway Foundation hopes to welcome 100 tourists per week once the station opens. After the structure is fully complete in 2027, they expect it to hold a total of up to 450 people.

Plans for the structure suggest it would have two concentric rings connected by spokes. The whole thing would be about 620 feet (190 meters) in diameter. The inner ring would serve as a port where spacecraft could dock to unload passengers and cargo.

People would travel from the dock to accommodations in the outer ring through pressurised access tubes. The Gateway Foundation's design calls for artificial gravity and comforts similar to the offerings of a cruise ship. "The use of fabrics, warm-coloured lighting and paints, and materials with texture all help us to connect and feel at home," Alatorre told Dezeen. "Because the station will have gravity, there will be sense of direction and orientation that isn't present in the ISS [International Space Station]."

The artificial gravity still wouldn't match Earth's, though — most of the station would have one-sixth of our planet's gravity, and some parts would have zero gravity. Alatorre said he expects new products, games, and companies to develop in a future industry of low-gravity tourism.

"There is potential for playing fictional games such as Quidditch from the Harry Potter series and the battle games from the Ender's Game series," Alatorre told Dezeen. "There will also be many of the things you see on cruise ships: restaurants, bars, musical concerts, movie screenings, and educational seminars," he added.

Other companies have floated simpler designs for future orbiting hotels. In 2011, a Russian company called Orbital Technologies said it would launch a seven-room space lodge by 2016. The plan never came to fruition. According to Orbital Technologies' original plans, guests could have stayed for five days at a cost of $1 million (R14 million). The vacation would have somewhat resembled the experience of astronauts on the ISS. Guests would have eaten space food, taken sponge baths, and used vacuum toilets, according to The Christian Science Monitor.

Aerospace company Orion Span, meanwhile, hopes to launch its Aurora Space Station in 2021 and open it to guests by 2022. The station would host six people at a time, including crew members. A 12-day visit would cost at least $9.5 million (R141 million).

People can already put down an $80,000 (R1.1 million) deposit to join a waitlist for reservations (whenever they open). Orion Span accepts Bitcoin and other cryptocurrencies. Within 72 hours of opening the waitlist, the company said it had sold four months' worth of reservation deposits.

Aurora wouldn't be a traditional hotel, and not just because of the lack of gravity. Visitors would work as a team to operate the station and conduct science experiments, similar to what astronauts do on the ISS. Orion Span would require its space tourists to undergo three months of training before they launch.

The design for Aurora calls for it to orbit Earth every 90 minutes, the same way the International Space Station does. That means visitors would see 16 sunrises and sunsets each day. Sleeping pods would offer some reprieve, and high-speed wifi would allow guests to connect with people back home.

The plan calls for adding new modules to the station over time, some as space condominiums. "Our architecture is such that we can easily add capacity, enabling us to grow with market demand like a city growing skyward on Earth," Frank Bunger, Orion Span's CEO and founder, said in a press release. "Future Aurora owners can live in, visit, or sublease their space condo."

Yet another vision for an orbiting hotel comes from a team of MIT students that won a NASA design competition. The space agency requested concepts for habitats that could house humans in orbit and eventually take them to Mars. The main feature of the team's design is a luxury Earth-facing hotel with eight rooms and a bar, restaurant, and gym.

Called the Managed, Reconfigurable, In-space Nodal Assembly (MARINA), the concept is a hybrid between a hotel and a space station. Rooms would come in the form of inflatable modules attached in a circle around the main spacecraft.

According to the students' plan, the hotel could open to guests by 2025, then get additional modules added over the next 15 years. By 2038, the students say the modules could be repurposed to carry a crew to Mars, where the spaceship could refuel with locally produced methane.

NASA would be a temporary tenant in the MARINA for about 10 years, according to the students' proposal.

The students have even presented an investment plan to the International Astronautical Federation.

Inflatable modules are a popular choice for space-habitat designers, since they can be deflated and compactly stored for launch. Rigid structures, by contrast, are constricted by the size of their launch rocket. NASA recently announced plans to test five deep-space habitat prototypes, including the above design from Sierra Nevada Corporation. Called the Large Inflatable Fabric Environment (LIFE), the habitat would expand to be 27 feet (8 metre) in diameter with three floors of living space.

Bigelow Aerospace is a pioneer in space inflatables. One of its designs is already attached to the ISS. Astronauts have been routinely monitoring the inflatable module, called the Bigelow Expandable Activity Module (BEAM), and conducting tests inside it.

NASA installed it in 2016 to test out the technology for future space missions. The agency renewed the contract two years later, agreeing to keep the module onboard through 2028.

Bigelow is currently designing a new space habitat based on that prototype. It's called the B330 because it would have 330 cubic meters of volume. Bigelow has proposed attaching the new module to the ISS as well. The B330 could launch at one third of its expanded size and house up to six crew members.

Two B330 modules could potentially link together to form their own space station. Bigelow Aerospace sees this as a way to build a space station that orbits the moon. A lunar space station is part of NASA's Artemis program, which aims to send astronauts back to the moon and, eventually, to Mars.

The company's CEO, billionaire hotel mogul Robert Bigelow, has hinted that inflatable space habitats could get sent to Mars. "This large space station can accommodate four people indefinitely and five people for many months," Bigelow said in a statement to Business Insider in September, adding, "the B330 is an exploration-destined space station, and we are excited about its future."

In the meantime, Bigelow is also planning to open a hotel in a module on the ISS. An offshoot of the company, Bigelow Space Operations (BSO), is focused on that project. In a statement, Bigelow said the company has paid deposits and reservation fees for up to four SpaceX launches to the ISS. Each launch would carry up to four people for stays of one or two months.

These tourist jaunts could begin after NASA certifies SpaceX to fly people to the space station, Bigelow said. NASA has said it would allow the first such "private astronaut" flight to the ISS as early as 2020.

Each seat on the SpaceX flight would cost an estimated $52 million (R776 million).

Bigelow hasn't shared designs for the planned hotel module yet, but prototypes of the modules it has designed for professional astronauts offer an idea. The unit, located at Bigelow's Las Vegas facility, is a steel-hulled variant of the B330 (that's not designed to launch into space).

Inside the unit are two vegetable gardens. Bigelow is testing such technology as a potential way to provide future astronauts with fresh produce on a long journey to Mars.

The testing facility has three floors, but without gravity, of course, it would be more open-concept. 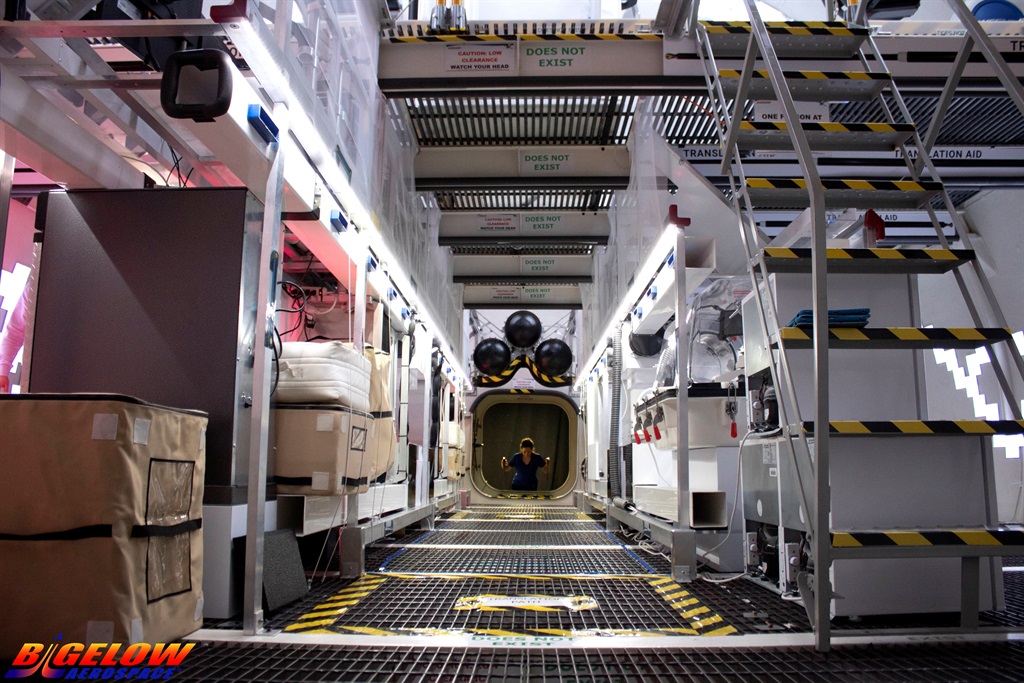 In the B330's central passage (shown here), supplies would be packed tightly in the deflated unit during the launch phase. Upon docking to another module or space station, the habitat would expand to two spacious stories. "Potentially we think that for the rest of this century, the expandable architecture is where it's at," Bigelow told Reuters. Jeff Bezos, the CEO of Amazon and founder of rocket company Blue Origin, wants to enable humanity to spread across the cosmos with spaceship habitats.

Bezos wants these floating colonies to have ideal, Hawaii-like weather all the time.