A giant elevator could connect Earth to space using current technology, experts say — here's how that might work This illustration by artist Pat Rawling shows the concept of a space elevator as viewed from the geostationary transfer station looking down the length of the elevator towards the Earth.
NASA/MSFC

A growing number of scientists and space-technology enthusiasts are looking into ways to construct a huge elevator, either on Earth or the moon, that could transport cargo to and from space.

In a study published in September, which has not been peer reviewed, two graduate students proposed a version of a space elevator that would stretch from the moon to Earth's satellite-level orbit. They said the structure could be built with current technology.

"They're right, and we were right first, that the lunar elevator is feasible technology," Michael Laine, president of space-elevator development company LiftPort Group, told Business Insider.

Other advocates of space elevators have argued for years that building such a structure is feasible with current technology and could open up new frontiers of space exploration.

Here's how a space elevator would work.

In 1895, Russian rocket scientist Konstantin Tsiolkovsky gazed at the Eiffel Tower and imagined it stretching into space. His daydream became the first pitch for a space elevator.

He imagined a tower like that could carry cargo to geostationary orbit - the height at which satellites can sync their orbit with Earth's rotation - 35,786 kilometers above sea level. As objects ascended the tower, they would gain horizontal velocity from the Earth's rotation and could use that speed to launch into orbit.

Relative to rockets, space elevators would be a cheaper, faster way to get cargo and people off of Earth. That's because liftoff is one of the most expensive and difficult parts of space travel. That hasn't changed. On average, getting material from Earth's surface into space costs about $20,000 (R301,000) per kilogram, or roughly $10,000 (R150,000) per pound. Since NASA's space shuttle program ended in 2011, private companies have been launching supplies to the International Space Station.

"The space elevator would essentially be an economic game-changer for the space industry," Tyler Harris, an engineer at the Pacific Northwest National Laboratory, told Business Insider. The basic design of a space elevator would involve a cable, or "tether," that could stretch from an anchor on the ground to a counterweight in space.

A heavy car, or "climber," would travel up and down the tether. The elevator would carry cargo to geostationary orbit, past the region where Earth's gravity is strongest.

The centrifugal force of the Earth's rotation would hold up the tether.

Think of holding one end of a string with a stone attached to the other end, and whirling it around in a circle. Centrifugal force is what pushes the stone outwards and makes the string stretch out its full length. In a space elevator, the tether would be like that string, and the counterweight would be like the stone. 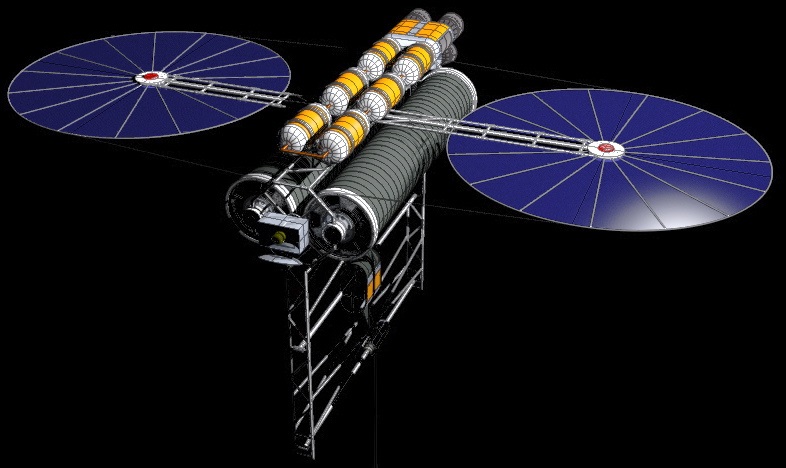 Harris recently conducted an assessment of three different space-elevator designs and found that they would all be "environmentally sustainable and economically viable."

The $90 billion (R1.3 trillion) cost estimate comes from the Obayashi Corporation, which is based in Japan. The company wants to build a space elevator by 2050. 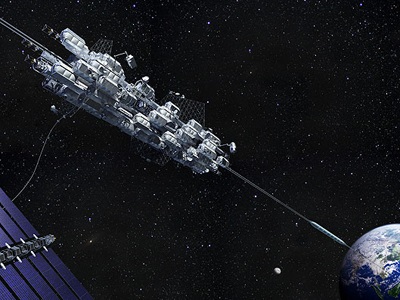 The China Academy of Launch Vehicle Technology, a subdivision of the nation's main space-program contractor, wants to build a space elevator by 2045, though company has not released any details about those plans.

NASA has funded research on space elevators, too, but has never committed to building one.

Obayashi expects it to take 20 years to construct the cable from a 400-meter base that floats in water. The company envisions the final product carrying 100-ton climbers off of Earth.

The Japan Aerospace Exploration Agency (JAXA) launched a miniature version of a space elevator in September 2018 to see how it reacted to the space environment. The device, called Space Tethered Autonomous Robotic Satellite - Miniature Elevator (STARS-Me), was designed by researchers at Shizuoka University. It involved two CubeSat satellites, each of which could communicate with the ground, with a 14-meter (46-foot) tether between them.

The goal: crawl a Bluetooth-enabled climber up the tether from one CubeSat to the other.

The launch was successful, according to a February report, but the researchers had difficulty communicating with one of the CubeSats. They have yet to verify whether the climber successfully traveled up and down the tether.

The same Japanese research team is planning to launch a larger version of the device. The next experiment involves a 2-kilometer tether and a robot that could clear away space debris. The researchers haven't announced any timeline yet, though.

Laine started looking into space elevators as a member of the NASA Institute for Advanced Concepts (NIAC), which researched such ideas from 1998 to 2007. The researchers found such a project feasible, but did not continue research after NIAC closed. So LiftPort pursued the technology on its own.

The trickiest part of developing a space elevator is finding the right material for the tether. The tether would have to withstand the weather in Earth's atmosphere, radiation from the sun, and impacts from meteorites and other debris.

Space-elevator advocates think carbon nanotubes could be the answer — the hollow tubes of carbon are just nanometers wide yet 100 times stronger than steel. 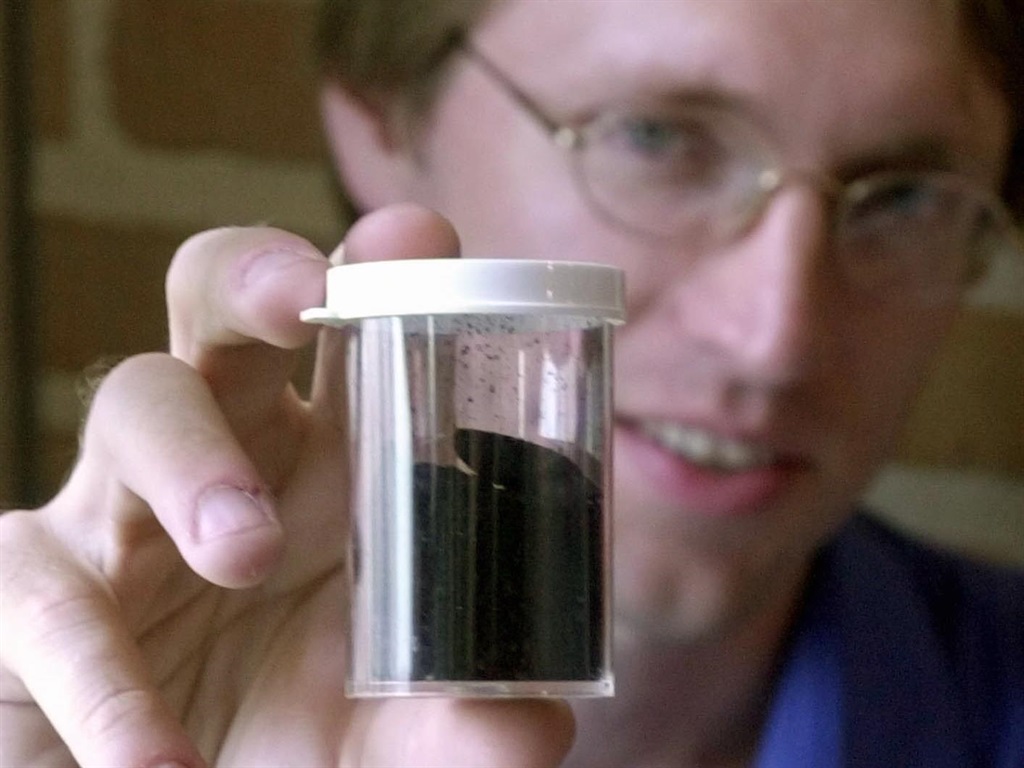 The problem is that these powerful fibers are a few meters long at most ?- nobody can get them anywhere near long enough to span the 22,000-plus miles (35 kilometres) required for a space elevator.

Another hurdle keeping space elevators in the realm of science fiction: space debris. The European Space Agency estimates that 128 million objects smaller than 1 centimeter are orbiting Earth, along with another 900,000 objects that measure 1 to 10 centimeters.

Any space elevator would be subject to collisions with these objects, so it would have to be capable of withstanding or out-maneuvering them.

However, the moon doesn't contend with all that debris, and lower gravity there means that more materials could support their own weight. So some researchers think a lunar space elevator is a better place to start. 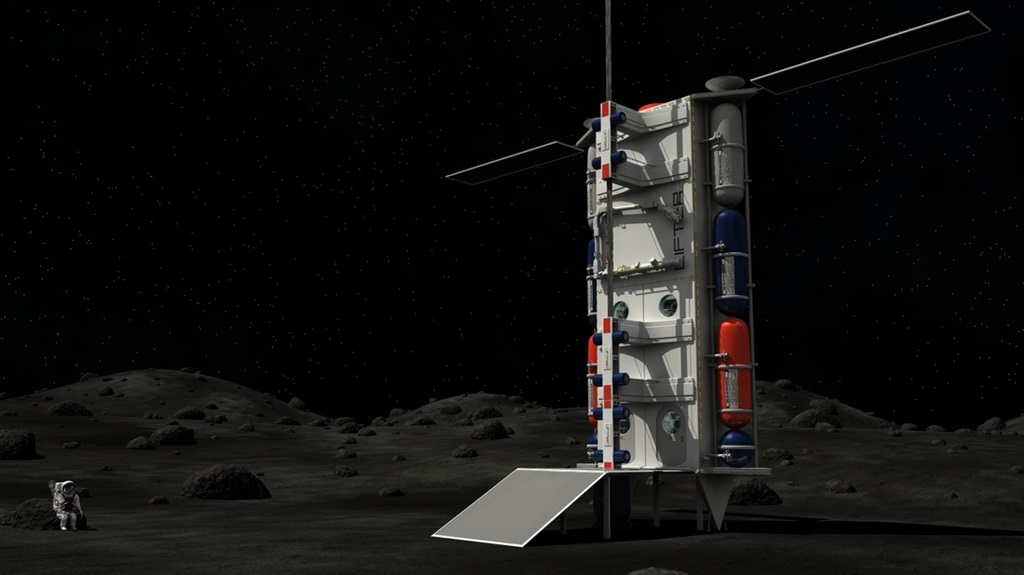 "The classical space elevator is a really tough problem because the Earth's gravity field is so great that you need such strong materials that we don't have right now," Jerome Pearson, an aerospace engineer who first proposed the lunar elevator in 1977, told NBC News. "On the other hand, you could build a lunar space elevator with existing materials right now."

Unlike a space elevator that rises from Earth, a lunar elevator would not use centrifugal force. Gravity would do all the work.

At LiftPort, Laine is also working on a lunar elevator concept. For the tether material, he has his eye on Dyneema, a polyethylene plastic fiber that's 15 times stronger than steel. But Laine said Dyneema is not a "Goldilocks material," since it doesn't hold up to radiation as well as he would like.

LiftPort has also been experimenting with Kevlar and carbon nanotubes.

"We have a really good handle on the most probable materials, and that those materials will very likely work," Laine said.

One analysis calculated that a lunar elevator could pay for itself after 53 uses, since it could cut at least two-thirds of the cost of landing on the moon and reduce the cost of sample-return missions at least nine-fold. 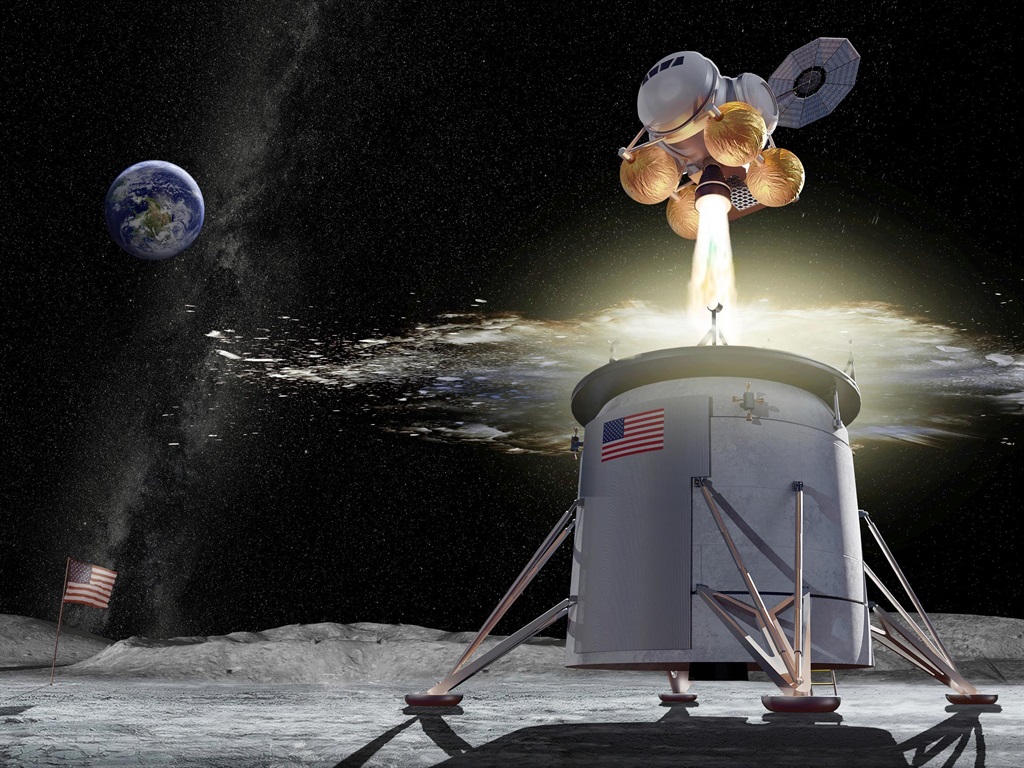 You can read that full cost analysis here.

"There are a lot of advantages with a lunar space elevator," Pearson said. "And with this new NASA program to return to the moon, there may be additional interest."

For now, though, any space elevator remains theoretical. “The big idea is still subject to a lot of details that we don’t have the answers to," Laine said. 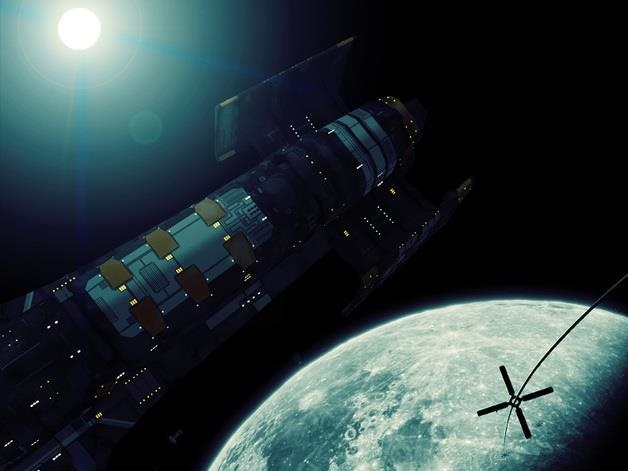 He added that the LiftPort team still needs to research the effects of rapid temperature changes that cargo would undergo as it ascended the space elevator. Work is also needed to determine how to protect cargo from solar radiation and how potential tether materials handle atmospheric changes. Then, of course, there are the complicated logistics of building such an elevator in the first place.

Ironing out those details is a slow process in these early stages. For now, it involves a lot of paperwork, complicated simulations, and financing efforts, Laine said.

"It's the boring, mundane task of building the biggest thing ever," he added.

But if a space elevator eventually becomes a reality, it could also help us access resources in space. "Not only does it enable new space exploration and opportunities in space, but the way I look at it is using those resources to improve sustainability on Earth," Harris said.

Asteroids can be literal treasure troves, since they contain valuable elements like gold, platinum, and iron. Mining materials on an asteroid could mean that we're not extracting those resources from the Earth.

Once we figure out how to extract valuable resources in space, that may open up possibilities for further exploration. For example, water collected in space could be broken down into hydrogen and oxygen to make rocket fuel, which could then send spaceships further.

"To enable us access to all of these space resources, we need to find a better, cheaper way to get into orbit," Harris said.