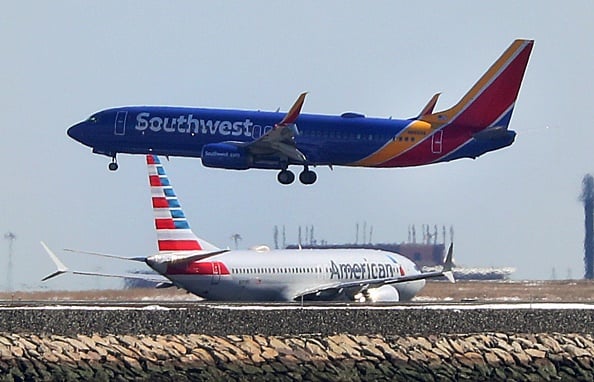 A Southwest Airlines Boeing 737 Max airliner made an emergency landing in Orlando, Florida, on Tuesday.

Southwest Airlines Flight 8701, a Boeing 737 Max 8, was en route from Orlando to Victorville, California, when its pilots declared an emergency minutes after takeoff, the Federal Aviation Administration (FAA) said in a statement to Business Insider.

Southwest Airlines told Business Insider that its pilots "reported a performance issue with one of the engines".

The engine issue reported by the pilots appears to be unrelated to the control-software issues that have plagued the 737 Max and that may have contributed to the crashes of both Lion Air Flight JT610 and Ethiopian Airlines Flight ET302.

Neither of the two ongoing crash investigations have indicated any performance issues with the plane's CFM International Leap-1B engines.

The FAA said it is investigating the flight that lasted just 11 minutes.

Southwest Airlines, which is based in Dallas, is the single largest operator of the Boeing 737 Max.

The plane involved in the incident is one of 34 Boeing 737 Max aircraft in the Southwest fleet that were grounded by an FAA emergency order earlier this month after the crash of Ethiopian Airlines Flight ET302.

Flight 8701 was headed for the Southern California Logistics Airport in Victorville, where the plane will be kept in short-term desert storage. As a result, there were no passengers on board the flight.

"The Boeing 737 MAX 8 will be moved to our Orlando maintenance facility for a review," Southwest said in a statement.

At the heart of the controversy surrounding the 737 Max is MCAS, the Maneuvering Characteristics Augmentation System. To fit the Max's larger, more fuel-efficient engines, Boeing had to position the engine farther forward and up. This change disrupted the plane's center of gravity and caused the Max to have a tendency to tip its nose upward during flight, increasing the likelihood of a stall. MCAS is designed to automatically counteract that tendency and point the nose of the plane downward.

Initial reports from the Lion Air investigation, however, indicate that a faulty sensor reading may have triggered MCAS shortly after the flight took off. Observers fear Ethiopian Airlines flight may have experienced a similar issue.

Boeing is working on a software update for MCAS along with hardware improvements to get its plane flying again.

Here is the FAA's statement:

"The crew of Southwest Airlines Flight 8701, a Boeing 737 MAX aircraft, declared an emergency after the aircraft experienced a reported engine problem while departing from Orlando International Airport in Florida on Tuesday. The aircraft returned and landed safely in Orlando. No passengers were aboard the aircraft, which was being ferried to Victorville, Calif., for storage. The FAA is investigating."