The most expensive private day school in South Africa, based on Grade 12 tuition fees alone, and excluding fees for “acceptance” and “application”, costs just under R200,000 for the year.

By way of comparison, a year of undergraduate tertiary tuition in commerce, law, or engineering at an institution like the University of the Witwatersrand typically costs between R40,000 and R60,000.

The nearest rival to Kearsney College is still St John’s College, which increased its fees by 2.7% to reach a 2021 total of R172,185 - a total that excludes additional fees amounting to just over R10,000 for the year.

Roedean School is the only institution currently with fees in the R160,000s range, and the majority of elite private schools now appear to be looking at a sweet spot of fees in the R150,000s.

It is important to note, however, that some of the basic tuition fees published by schools exclude many additional expenses, levies, non-refundable deposits, and mandatory costs, while others incorporate them into their schedule of fees, which makes direct comparison difficult.

In spite of 2020 being a particularly tough schooling and financial year for most, many private schools in South Africa chose to increase their fees, in some cases significantly. None, however, were brave enough to break the 6% increase mark - which between 2019 and 2020, was roughly the minimum increase for all schools in this price bracket.

Kearsney College’s increase of 4.5% was the biggest annual increase.

Roedean School, St Mary’s School, and St Alban’s College all registered 3% increases for 2021, less than half of their increases in 2020, while fees for St John’s College increased by 2.7% - off a 6.9% increase the previous year.

Just two schools from last year’s top ten, Bishops Diocesan College and St Stithians College, chose not to increase fees for 2021 - a decision that saw the latter drop down several places. This is significant, given that between 2019 to 2020, Bishops increased its fees by 7%, and St Stithians by 9.86%.

Here’s how the most expensive day schools in South Africa compare: 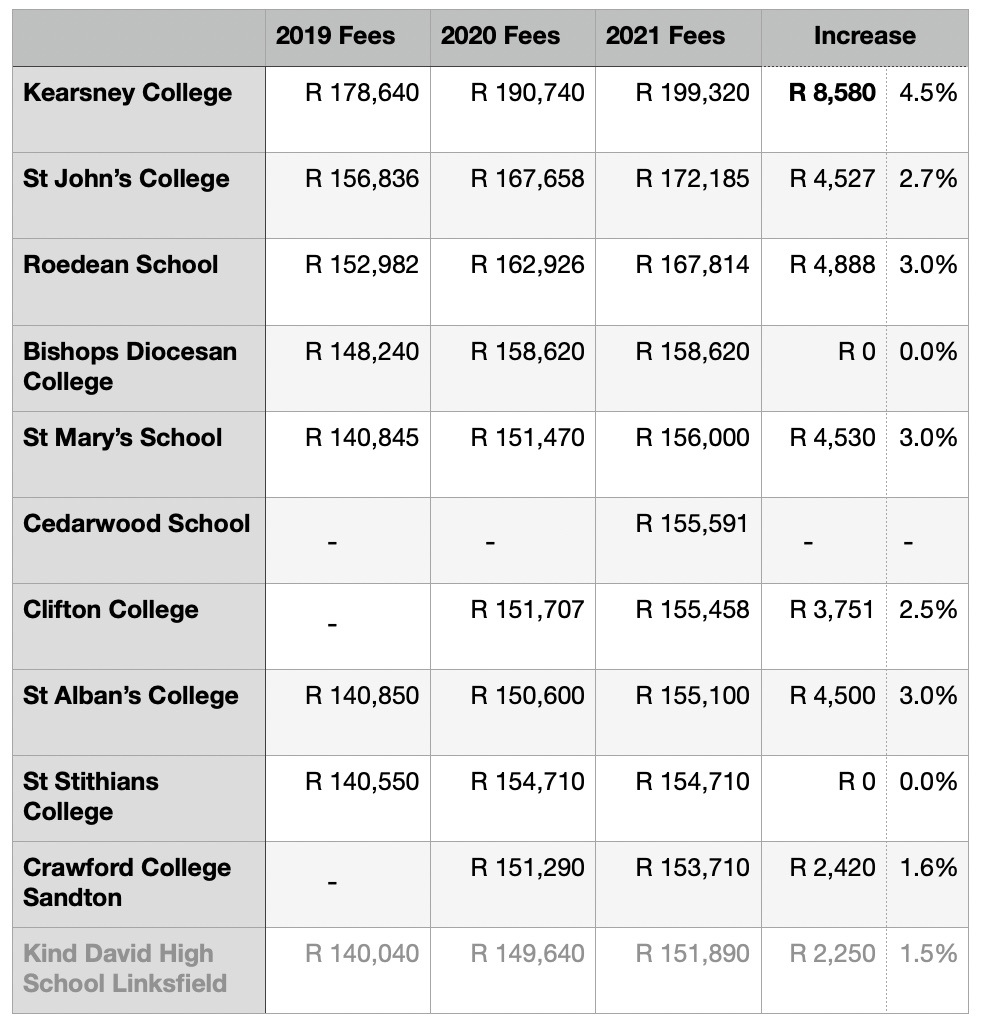 The most expensive day schools in South Africa.

* This article has been updated to reflect inaccurate fees and subsequent percentage increase for Clifton College. The original article – incorrectly – held its fee increase for 2021 to be 5%, the highest among private day schools. The increase is actually 2.5%. This makes Kearsney College's 4.5% increase the highest for 2021.