Work by South African land artist and sculptor Strijdom van der Merwe is on display in Taiwan as part of the Nanhui Art Project. Dubbed the "Staircase to Heaven", the structure's carefully crafted angles create an optical illusion.

Van der Merwe's acclaimed land art, installations and large-scale sculptures have an intimate connection to the environment. The 60-year-old artist often makes use of natural materials which are found on-site, with works exhibited around the world, in places like Switzerland, Italy, Japan, Finland, and Lithuania.

Taitung County, in the south of Taiwan, is the latest location playing host to Van der Merwe's work. On a remote stretch of coastline stands a staircase frame. When viewed from the right angle, the stairway appears to extend into the distant sky, each step moving further and further away from land.

In reality, the Staircase to Heaven is more of a ladder. When viewed from the side, the frame extends vertically off the ground, with no horizontal depth. It's the precise angling and viewpoint which creates the three-dimensional illusion.

Constructed out of 50mm mild steel square tubing and weighing 240kg, the Staircase to Heaven has a history as interesting as the optical illusion it creates. 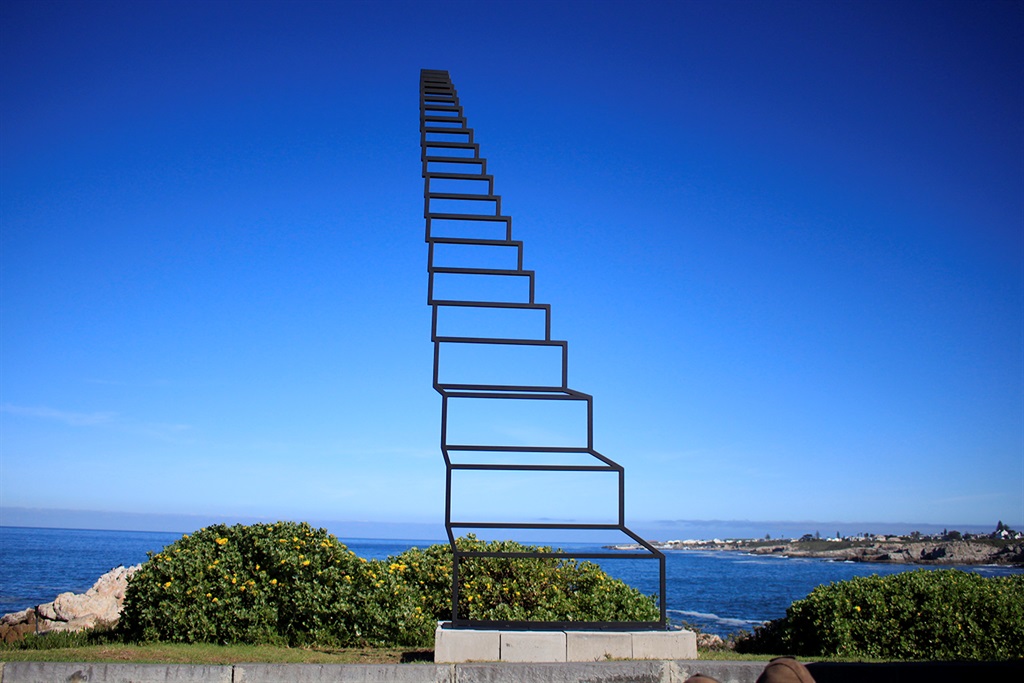 The sculpture was first unveiled at the Hermanus Fine Arts Festival in 2016 and, a few years later, was bought by a private collector for an undisclosed amount. This original structure is now housed at Creation Farm in the Hemel and Aarde Valley.

And when the Nanhui Art Project, which brings together land artists from across the globe, approached Van der Merwe with an invitation to showcase the Staircase to Heaven, the South African artist planned to create a second edition of the same concept. Instead of going for an exact replica, Van der Merwe agreed to recreate the work "as long as we didn't copy [it] exactly the same but make it unique in the sense that the stairs have some twist in them," he tells Business Insider South Africa.

Van der Merwe's plan involved flying to Taiwan in the run-up to the Nanhui Art Project's launch in July and, once there, oversee the manufacturing of the sculpture. But the Covid-19 pandemic and associated travel restrictions forced the artist to stay put.

Instead, Van der Merwe relied on a Taiwanese artist and craftsman Chou Sheng-hsien to build the newest version of Staircase to Heaven.

"The organising committee suggested that I work with a professional craftsman artist to manufacture the sculpture for me according to my design," Van der Merwe tells Business Insider SA.

"I sent him the PDF files with all the instructions, and he produced the sculpture according to that."

Currently only two versions of the Staircase to Heaven exist. The Nanhui Art Project ends this month.