Fed chair Jerome Powell with US president Donald Trump. (Getty Images)
The US central bank this week sent a strong signal that it may not hike interest rates by as much as it expected.

Federal Reserve (Fed) chair Jerome Powell said the US key interest rate is now "just below" a neutral level: it neither cools nor bolster the economy.

“Gone was the bluster of a few months ago about four rate hikes and it has been replaced by more caution and a real possibility that interest rates hikes from the US will start to taper off in 2019,” says André Botha, senior currency dealer at TreasuryONE.

Recent US inflation data has been softer than expected and there are signs that interest rate sensitive sectors of the economy are cooling, including housing, says Arthur Kamp, economist at Sanlam Investments.

“If the economy does slow significantly, and if inflation remains well behaved, the Federal Reserve’s interest rate hiking cycle may be less aggressive than suggested by its own published interest rate forecasts.”

The central bank has raised interest rates eight times since late 2015, and its key interest rate now floats in a range of 2% to 2.25%.

US rates should be hiked again in December, but following the latest signals from the Fed, the general expectation is now that rates could be hiked by less than the market expected in 2019, says Kamp.

This has significant implications for South Africa:

Emerging market currencies have come under massive pressure in recent months due to a number of factors, including the brewing trade war between the US and China.

The news that US rates could peak at a lower level than expected gave the rand a strong push this week. On Friday afternoon, it was trading at R13.76/$ - from R14.82 a month ago. Kamp expects more rand strength, all else equal, over coming months if US interest rate increases are less aggressive than previously thought.

A stronger rand (coupled with a collapsing oil price) is expected to result in a petrol price cut of almost R2 a litre next week, and more could be relief coming. 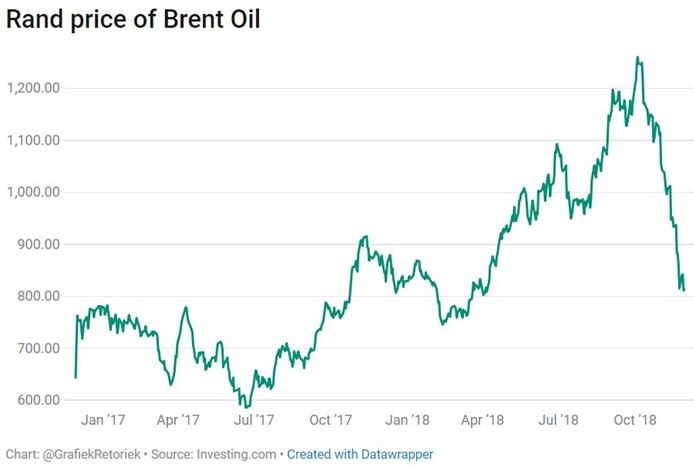 This has a significant impact on inflation expectations, as transport costs represent a large chunk of local prices.

If fuel prices continue to fall, it will have a significant impact on inflation, says Kamp.

The Fed’s signal this week is significant because it means a weaker dollar, and less imported inflation into South Africa, says Michael Treherne, portfolio manager at Vestact. “Which in turn means the SARB (SA Reserve Bank) is under less pressure to raise rates here at home.”

"One of the reasons the SARB raised rates last week was because they were trying to get ahead of the Fed's hiking. The SARB’s move looks a bit premature now.”

So far, so good for South Africa.

A number of risks remain, Kamp said. The labour market remains tight in the US: unemployment is low and companies are struggling to find workers, which is pushing up salaries. This could eventually feed through to inflation, and may result in the Fed sticking to its published persistent interest rate hiking path.

The larger threat is a slowing economy in the US, and in China, which will hurt demand for South African exports.

This will create a challenging environment for the local economy to gear up for much-needed growth, warns Kamp.