From inventing the dolosse that guard coastlines to pioneering the first heart transplant, South Africa has a long and proud history of invention and innovation.

Some of South Africa’s most famous firsts include:

The past decade has been no different, with South Africans coming up ideas to combat pollution and crime, sneak up on wildlife, deliver blood faster, and fix penises.

Here, in no particular order, are our favourite inventions and innovations to come out South Africa in the past 10 years. South Africa can proudly claim that it was one of the first country’s in the world to make electric game-viewing vehicles so quiet they freak out people and animals.

For Japie Van Niekerk, owner of Cheetah Plains Private Reserve, the idea was a no brainer after driving on an electric golf cart. That made him painfully aware of the sheer noise a diesel engine makes when out on safari.

The custom-made prototypes can go about 50km and are powered by Tesla batteries. Not only do they travel quietly, they're also decked with USB charging stations and heated seats.

Work has steadily been progressing on the ZiBi Pen, the adrenaline autoinjector that South African biomedical engineers come up with as a cheap alternative for the popular – but pricey – EpiPen.

The pen was designed to deliver a shot of adrenaline from a replaceable, R200 cartridge. It could revolutionise the emergency treatment of anaphylaxis, a severe allergic reaction that can be triggered by food or insect bites.

It is now almost a year into its second phase of development and testing, to make sure the device is both effective and safe for use for all ages and body types. The team estimates it could be launching commercially as soon as 2021.

Read: A medical engineers have built a EpiPen replacement that costs R200 a shot

The Pelebox is a smart locker used by patients when collecting chronic medication. Instead of queuing at a pharmacy or clinic, patients receive a one-time PIN on their phones, and use that code to open a locker containing their medicine.

Engineer Neo Hutiri came up with the idea in 2014 after being diagnosed with Tuberculosis (TB) and having to wait, sometimes as long as 3 hours, to get his medication from his clinic in Bophelong, Vanderbijlpark.

In 2019 the concept won the Royal Academy of Engineering’s 2019 Africa Prize for Engineering Innovation making Hutiri the first South African to win the prestigious medal – and accompanying £25,000 (R470,000) cash prize – from the London-based organisation.

A tree planting drone built in a garage in Hermanus... The module, called the Podder, can attach to the bottom of popular drone models. Louw and Walker estimate that a team of two, flying two drones, can plant up to 40,000 seeds into the ground in a day.

The first module was built in a garage in Hermanus, but since then Louw, a certified drone pilot, and Walker, a mechanical engineer based in Sydney, have founded a company called AirSeed Technologies, and hope to use their technology to address deforestation.

...and another drone that can deliver blood.

In a demonstration using a package of fake blood and a TRON Unmanned Aerial Vehicle (UAV), they successfully showed they could deliver potential live saving sachets to remote areas of South Africa in emergencies.

SANBS believe this could be the game changer they are looking for when it comes to delivering emergency blood to hospitals as far away as 100km away from blood banks.

The South African Civil Aviation Authority (SACAA), the regulatory body responsible for licensing UAVs or drones, confirmed SANBS will still need to register for the necessary operating certificates before being able to operate in SA airspace.

Read more:  Emergency blood could soon be transported by drone in South Africa

Shorts made from plastic.

Almost 20 plastic bottles can make one pair of shorts. The shorts are water repellent, quick-dry, and seamless on the inner thigh so no chafing - a bonus for those of you planning on spending long days out surfing over summer.

The best bit is if you didn’t know they were made from plastic, you wouldn’t be able to guess; they're surprisingly soft to touch and stretchy.

A beach bat that is an international hit. 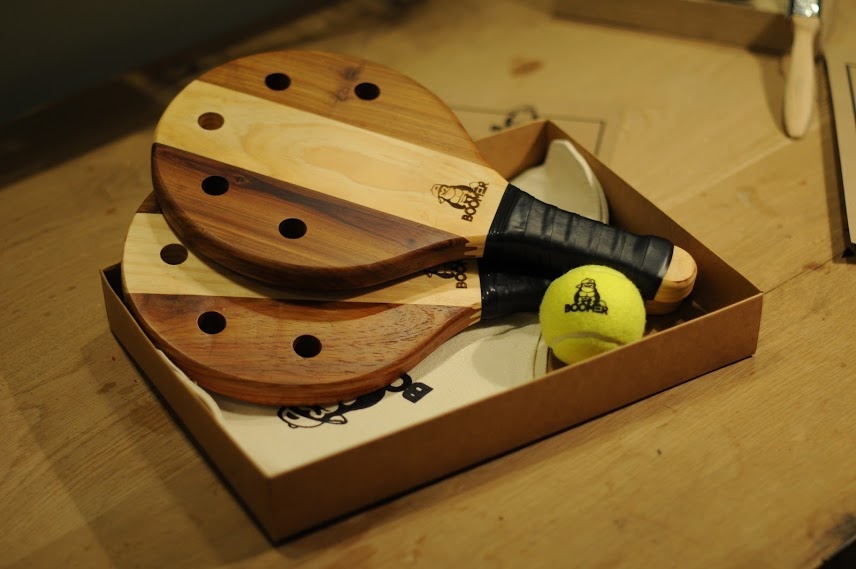 They have a unique hole design which make the bats easier to swing with less wind resistance.

They’re also made with sustainably-sourced woods of different strengths, which combine to create the required flex and power properties in the bat. It is the same principle applied to multi-layered wooden skateboard decks.

Read: A South African has designed the ultimate beach bats - and they're now in hot demand across the world

A bag that cooks food and doesn’t need electricity.

Wonderbags not only look beautiful but they offer a simple innovation to many lower-income families who can – increasingly – struggle to afford electricity.

It's a heavily insulated container that allows you to slow-cook food for up to 12 hours with no more electricity required once the pot is heated.

The Wonderbag was listed as one of Time magazine’s Top 50 genius products. Customised Wonderbags were also presented to Prince Harry and Meghan Markle, in the UK, as a wedding gift from the Wonderbag team and the Lesotho royal family.

Read: Time magazine has named this South African invention one of its top 50 'genius' products

Ludwick Marishane was still in high school when he thought of DryBath, a gel that does all the work of a bath without the need for water. Within six months, the teenager had devised the formula for the gel.

For people with indoor plumbing this sounds like cool camping gear. But for 2.5 billion people worldwide who do not have access to clean water, DryBath is more of a life-saver than a tool of convenience.

Waterless solutions were very handy during Cape Town's drought when the city almost ran out of water.

Read: A High School Student Invented A Bath-Substituting Lotion That Could Save Millions Of People

South African engineer James van der Walt is the brains behind the Solar Turtle, a shipping container that can provide 3 kilowatts of green energy, and protects itself from trouble in just 46 seconds.

The containers can power communities with limited infrastructure in townships and rural areas. This one in Delft, 26km outside Cape Town, will power a tailoring business as well a bakery. It is also equipped with WiFi and can be controlled with a cell phone.

Other "turtle-preneurs" have run ice machines, printed ID photos, and operated a rural internet cafe, where children could charge their phones and buy airtime to surf the internet.

Read: These SA shipping containers - now used as solar-powered shops - can defend themselves against attacks The risk of bystander-rescue drownings saw the National Sea Rescue Institute (NSRI) develop one of the world’s best peer rescue programmes, with its bright pink buoys.

A rescue buoy is mounted prominently on a large board with simple instructions and tips. That board also helps to fund the R1,500 pink rescue buoy sites by providing advertising real estate.

Pink rescue buoys pioneered in South Africa are now being tested in Australia, after being credited with saving 43 lives in SA over the past two years.

South Africa has a 2,850km coastline, most of its swimmable and much of it unguarded. It remains impossible to have lifeguards on station at every one of the country’s beaches – and when bystanders step in to help, tragedy sometimes follows.

Read: Pink South African rescue buoys have saved 43 lives since 2017 – and now Australia is interested in them

This South African virtual reality system can test whether you are good with heights, without you having to leave the ground.

The Working at Heights VR experience is designed by South African augmented and reality design company Sea Monster to help ArcelorMittal South Africa, the largest steel producer on the African continent, to train workers on a steel plant in Vanderbijlpark.

There employees need to scale heights of up to 190 metres to work. The virtual reality system tests whether you have a fear of heights, and how well you function up high.

Read: A new SA virtual reality innovation can test whether you are good with heights

South African start-up SharkSafe Barrier developed a shark barrier that the ocean predator will not cross.

The barrier is made out of tubes containing strong magnets, and biomimics a kelp forest to visually deter sharks. Sharks are able to detect magnetic fields, thanks to sensory organs called ampullae of Lorenzini in their heads. These ampullae are a highly sensitive network of tiny jelly-filled pores that allow sharks to sense electromagnetic changes.

Read: These South African magnetic field barriers stop sharks 100% of the time - and they’ve just been installed in Reunion The R4.4 billion MeerKAT telescope was built to look to the stars and unveil the secrets of the cosmos. It's doing just that and more. Some of the first images it has brought back has been of a massive black hole at the centre of the Milky Way.

Read: An astounding image of the massive black hole at the centre of our galaxy, courtesy of Africa's new super telescope

The telescope will ultimately be absorbed into the Square Kilometre Array (SKA). The SKA is set to become the largest radio telescope on Earth and will include thousands of dishes on the African continent and millions of antennas in Australia.

South African doctors successfully performed the world's first penis transplant on a young man who had his organ amputated after a botched circumcision ritual.

Performed in 2014, the 9-hour transplant, was part of a pilot study by Tygerberg Hospital in Cape Town and the University of Stellenbosch to help scores of initiates who either die or lose their penises in botched circumcisions each year.

The world’s-first bio-brick made using human urine made international news. Created in the University of Cape Town’s (UCT) Department of Civil Engineering it showed that South Africans were at the forefront of shifting concepts around waste recovery when it was unveiled by Suzanne Lambert, a masters civil engineering student under her supervisor Dyllon Randall, a senior lecturer in water quality engineering.

The bio-bricks are created through a natural process called microbial carbonate precipitation that mixes urine, sand, and bacteria.

The bricks lose their ammonia smell after drying at room temperature for a day or two and are safe to use and handle. To make one brick 30 litres of urine is used.

The first brick is now on loan to the Vienna museum for four years as part of an exhibition dedicated to contemporary design production.

The bio-bricks hold out the prospect of a sustainable alternative to standard clay and concrete bricks.

Business Insider South Africa is proud of South Africa’s entrepreneurial spirit. Should you wish to highlight our latent talent making a difference in your community, please email us at team@businessinsider.co.za and tell us about how their invention is transforming the way you live.

Related Links
Huawei is getting a first look at cutting-edge defence, health, and AI startups from Oxford...
Your guide to moving with the times and adapting to the modern workplace
Popular clothing brand MK Originals is run out of a Khayelitsha bedroom – and is helping to...
Next on Business Insider
Saudi Aramco's profits shoot up 90% to another record as the energy crisis sends oil prices soaring